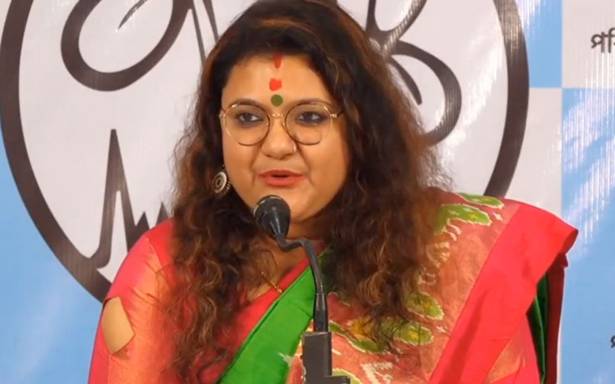 Development comes two days after Suvendu Adhikari joined the BJP along with nine MLAs and one MP.

BJP leader Sujata Mondal Khan, who is the wife of president of West Bengal Bharatiya Janata Yuva Morcha and Bishnupur Lok Sabha MP Soumitra Khan, on Monday joined the Trinamool Congress, saying she did not get the respect she deserved in the BJP.

“I was a BJP worker when the party had two MPs. Now there are 18. There are many opportunists who are joining the BJP… it has become a B-team of the Trinamool Congress. Why should I not join the TMC now,” she told journalists at the Trinamoool Congress headquarters in Kolkata.

Ms. Khan expressed hope that good sense would prevail over her husband and he would return to the Trinamool Congress.

Ms. Khan came into prominence for campaigning almost single-handedly for her husband in the 2019 Lok Sabha polls. Mr. Khan was a Trinamool Congress MP before joining the BJP.

Meanwhile, BJP MP Soumitra Khan, responding to the developments, said that he will send a legal notice of divorce to his wife Sujata Mondal Khan.

Senior Trinamool Congress Saugata Roy welcomed Ms. Khan into the party and acknowledged her contribution in helping her husband win from Bishnupur. In 2019, Mr. Khan was not allowed to campaign in Bishnupur area because of legal issues. It was Ms. Khan who campaigned for her husband and the BJP won the seat. “We are happy that Sujata is joining the Trinamool Congress,” Mr. Roy said.

In another development, there was violence at the BJP’s ‘Jogdaan Mela’ (joining rally) at Durgapur in Pascghim Bardhhaman, where workers from other parties were scheduled to join the party. Supporters of the BJP came to blows and attacked each other with chairs and furniture.