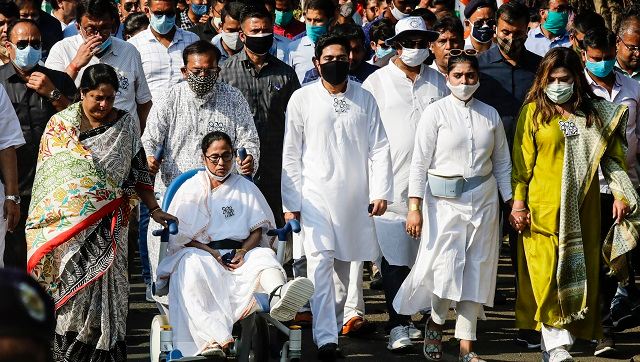 The agrarian constituency which shook the foundations of the mighty Left regime over the anti-land acquisition movement in 2007, has now turned into a battleground of titans with Mamata suddenly deciding to switch from her Bhowanipur seat to the constituency held by Adhikari, her former lieutenant who has switched loyalty to the BJP.

West Bengal is all set to go for voting on Thursday (1 April) in the second phase of Assembly elections. In phase two, 30 constituencies are up for grab with 171 candidates in the fray.

Of the total 171 candidates, only 19 (11 percent) are women while 152 candidates are men. TMC and BJP are contesting in all the 30 seats, while CPM is in the fray in 15 and its alliance partners of United Front or Sanjukta Morcha the Congress and ISF are competing in 13 and two seats, respectively.

According to the Election Commission, a total of 75,94,549 electors will exercise their franchise in the second phase of polling in 10,620 polling stations spread across the 30 constituencies.

All 10,620 booths where polling will be held this phase have been declared as sensitive by the Election Commission, which has deployed around 651 companies of central forces to provide security, officials said.

Besides, the state police will also be deployed at strategic locations during the polling which will begin at 7 am, they said. A total 199 companies of the Central Armed Police Force will be deployed in Purba Medinipur, 210 companies in Paschim Medinipur, 170 in South 24 Parganas and 72 in Bankura, the sources said.

The Assembly constituency of Nandigram will also go to the polls in the second phase where Chief Minister Mamata Banerjee is contesting against Suvendu Adhikari, who left TMC and joined the BJP in December last year.

Besides Mamata and Suvendu, Left front candidate Minakshi Mukherjee is also trying her luck from Nandigram. The Left has won this seat eight times, and while TMC won three times.

List of constituencies that will go to polls in phase 2:

The agrarian constituency which shook the foundations of the mighty Left regime over the anti-land acquisition movement in 2007, has now turned into a battleground of titans with Banerjee suddenly deciding to switch from her Bhowanipur seat to the constituency held by Adhikari, her former lieutenant who has switched loyalty to the BJP.

For Adhikari it is a battle for political survival as a defeat would be a devastating blow and might also put a question mark on his political graph in his new party the BJP. Similarly, a victory would not only establish him as one of the tallest leaders in Bengal but would also push him few miles ahead of others in the Chief Ministerial race in case the BJP is voted to power.

For Banerjee, who is running for the third successive term as chief minister, a victory is a must to lead the government and keep together her party, which is faced with exodus.

For the Congress-Left-ISF alliance candidate Minakshi Mukherjee of CPI-M, the challenge is to regain her party’s lost ground.

Another prominent seat going to the poll in the second phase is Sabang, where TMC has fielded its Rajya Sabha MP Manas Bhunia. He is up against TMC turncoat and BJP leader Amulya Maity.

Bhunia, a former state Congress president, had held the seat from 1982 to 016 as Congress nominee before switching over to the TMC in September 2016.

In Debra seat, two former IPS officers will cross swords. One is BJP candidate Bharati Ghosh who is contesting against TMC’s Humayun Kabir. Both had resigned from their senior police posts to join active politics.

Campaigning for the second phase of the West Bengal assembly poll had ended on Tuesday evening with the final day seeing a hectic canvassing for the Nandigram seat in the Purba Medinipur district.

Union Home Minister Amit Shah held roadshows with Bengal’s megastar Mithun Chakraborty in support of Adhikari in Nandigram during the day, while Banerjee, who is confined to a wheelchair following her injury which she had sustained while campaigning in the constituency, crisscrossed it addressing rallies at several venues.

IOn the last day of campaigning, the feisty politician held two back-to-back rallies in Paschim Medinipur despite the early summer heat urging people to vote for TMC so that the development work taken up there by the government continued.

TMC MP Abhishek Banerjee toured the rest asserting that TMC will not let Bengal to be ruled from Delhi or Gujarat in an apparent reference to the battery of central BJP leaders and ministers camping in the state.

“Bangla wants her own daughter (Mamata). So vote for her,” Abhishek urged in his meetings.

Prime Minister Narendra Modi, Shah and BJP national president JP Nadda had led BJP’s campaign from the front addressing rallies at Kanthi and Nandigram and urging the electorate to vote for the saffron party to usher in ‘ashol poriborton‘ (actual change) to build ‘Sonar Bangla'(prosperous Bengal).

Modi in his rallies had attacked the TMC government and Banerjee, accusing her of “appeasement politics” and asserting that “khela shesh hobe” (game will be over). Other star campaigners of the BJP stressed on scams allegedly involving the ruling Trinamool Congress — from the Saradha and Narada tape scam to the recent allegations over the siphoning of funds for Amphan relief and the COVID-19 pandemic.

They highlighted the achievements of the BJP-led government at the Centre in their rallies and blamed the TMC government for not allowing schemes like the Ayushman Bharat, PM Kisan Samman Nidhi to be implemented in the state, where the BJP leaders claimed corruption and anarchy are prevalent.

Documents to carry for identification at polling stations:

Here is a list of documents voters can carry for identification at polling stations. Carry any of these mentioned identity proofs while voting.