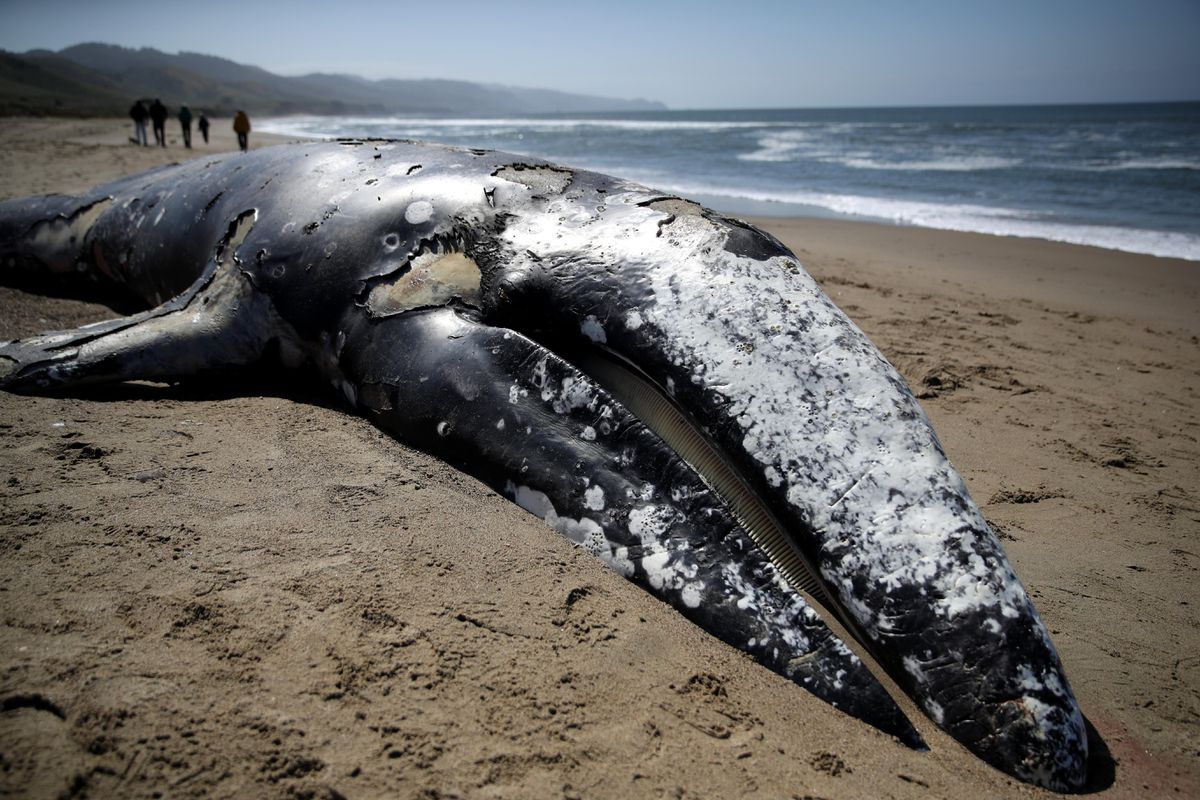 In 2016, the National Oceanic and Atmospheric Administration, or NOAA, described the gray whale population as “fully recovered” with an estimated population size of around 27,000 individuals. Troubling new population estimates tell a different story.

Just last week, NOAA reported the eastern Pacific gray whale population had declined by nearly 25% since their 2016 estimate. In a separate report also published last week in the Marine Ecology Progress Series, marine ecologist Dr. Fredrik Christiansen and his co-authors provide compelling evidence that these gray whales may be starving to death.

Christiansen’s study specifically describes a concerning trend documented during the eastern Pacific gray whale’s 2019-2020 winter breeding season: 378 whales washed up dead on the West Coast of Mexico, the U.S., and Canada. During the previous 18 years, an average of 29 gray whales washed-up annually, NOAA reports. At over ten times this average, the sheer number of strandings last year stand out. Only now are researchers beginning to understand the extent of the problem.

Using drone technology and photographing gray whales from boats, Christiansen and his co-authors tracked the condition of these gray whales before, during, and after the 2019-2020 breeding season. Signs of trouble were apparent early on. As Christiansen explains in the study’s press release, the team observed “a large number of gray whales…leaving their feeding grounds already in a poor nutritional state…”

According to. Christiansen’s study, gray whales normally ‘bulk up’ with blubber during the May-October feeding season in preparation for migration and breeding. In a typical year, gray whales lose between 11 and 19% of their bodyweight before returning to their feeding grounds the following May, in part because the animals essentially stop feeding once breeding begins. But in 2019, the whales left their feeding grounds for Mexico already showing signs of starvation. “By the time they have completed the breeding season in Mexico, they have depleted their energy reserves and starve to death,” Christiansen says.

Both Christiansen’s study and similar reports by Dr. Ronzón-Contreras from 2019-2020 found most of the dead, washed-up whales were juveniles and adults, which was another notable change for a standard year. Normally, when the gray whales are not evidently starving, whale calves are the most common gray whales to find stranded on West Coast beaches. The shift in these strandings from newborn calves to older gray whales further indicates an unusual phenomenon occurred.

According to Christiansen and his co-authors, “the underlying factors that caused this reduction in body condition [have] not yet been determined.” However, the study’s authors raise a few possibilities. One potential culprit is deviations from the whales’ preferred migration route caused by human shipping, fishing, and gas exploration activities, forcing these gray whales to extend their already long migration routes. Another possibility is the decline of the eastern Pacific gray whale’s primary food source: amphipods in the Bering Sea. Populations of these crustaceans have been declining since the late 1980s, which could be catching up with the whales. A disease outbreak may be to blame, too, but scientists lack the data to assess the effects of a potential disease.

Alternatively, the researchers suggest the eastern Pacific gray whale population may actually be reaching the carrying capacity of their environment. In other words, the sudden loss of gray whales during last year’s breeding season could indicate the population is already at the maximum size the environment can support. If this is the case, recovery should be evident in the years following major losses. According to Christiansen and his co-authors, surveys of the eastern Pacific gray whale’s calving rates should be a research priority following last year’s decline.

Back to Top
Close Add post
X
These Coronavirus Vaccines Can Have Side Effects But Cannot Give You Covid-19…ScienceYou can have side effects when you get the Covid-19 coronavirus vaccine. But that doesn't mean that ... [+] you can get Covid-19 from the vaccine. (Ph…

West Coast Whale Population Drops 25%, Starvation May Be To Blame

X
As Global Covid Cases Surpass 100 Million, A New Player Enters The game: Hope…ScienceOn January 26, 2020, global reported Covid cases surpassed 100 million. CDC, Amy Sterling As we near the one year mark for many who have been waging t…
close