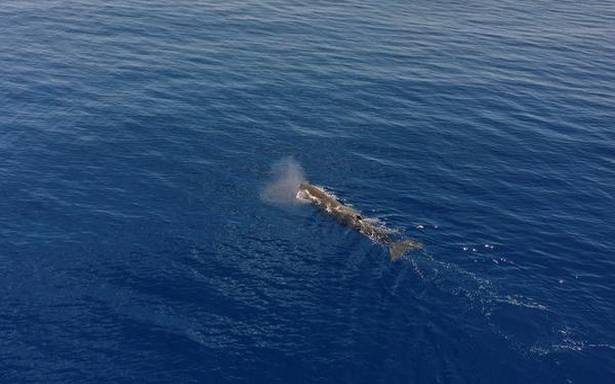 Protecting the Mascarene would help safeguard fisheries more than 2,000 km away in East Africa.

Over two weeks at sea, scientists spotted pilot whales and spinner dolphins, orcas and more. But not a single sperm whale had crested the choppy waters of the western Indian Ocean.

Then, an underwater microphone picked up a series of unmistakable clicks and squeaks. A large pod of the endangered whales was nearby. And from the sound of it, they were feeding.

The scientists are on a month long quest to document whales and other marine mammals living around the Mascarene Plateau, hoping to bolster arguments for protecting the remote 2,000-km underwater ridge to both fight climate change and protect ocean wildlife.

“We’re actually generating some of the first baseline data for this area on marine mega fauna, and that feels quite exciting,” said Exeter University biologist Kirsten Thompson, one of the scientists on the Greenpeace research expedition.

Lecturer in ecology at the University of Exeter, Dr. Kirsten Thompson conducts a sighting survey aboard the Greenpeace’s Arctic Sunrise ship at the Saya de Malha Bank within the Mascarene Plateau, Mauritius.

For sperm whales, the largest of the toothed whale species, “the only data from this area comes from the whaling days,” she said. The group of researchers hopes also to draw attention to the U.N. campaign aimed at persuading countries to protect at least 30% of the planet’s land and ocean by 2030.

The plateau is a conservation target partly for the world’s largest seagrass meadow carpeting its Saya de Malha Bank, which absorbs climate-warming carbon dioxide and provides a vast wildlife habitat. Whales, meanwhile, are also key to combating global warming. They release tonnes of iron a year in their faeces, which feeds CO2-absorbing phytoplankton.

The Mascarene research is timely. A March 17 paper in thejournal Nature maps out marine areas teeming with life as conservation targets, and suggests that guarding these zones from fishing, shipping, deep sea mining and other human interference would protect more than 80% of endangered marine species’ habitats.

It would also increase global fish catches by more than 8 million tonnes, according to the study. Most of the target areas are within territorial waters of over 100 countries around the world. But a few like the Mascarene are in international waters.

Protecting the Mascarene, which is larger than the Great Barrier Reef off the coast of Australia, would help safeguard fisheries more than 2,000 km (1,242 miles) away in East Africa,another group of researchers argued in a 2019 study in the journal Marine Policy.

“These protected areas do become a bit like savings accounts. It’s not just about protecting turtles and sequestering carbon,” said Douglas McCauley, a former fisherman who is now a marine biologist at the University of California, Santa Barbara.

The bow of Greenpeace’s Arctic Sunrise ship is seen at the Saya de Malha Bank within the Mascarene Plateau, Mauritius

Rising from the ocean depths, the Saya de Malha shelf provides a unique shallow habitat in the middle of the high seas, hosting an estimated 3,900 marine species from the square-nosed sperm whales to molluscs, analysis by McCauley and colleagues for a 2020 study in Marine Policy shows.

“Very little is known about the animals that live and feed here,” said marine biologist Tim Lewis, who is running the acoustic surveys on the Greenpeace voyage.

Creating a global network of marine sanctuaries is not likely to be easy. For coastal waters, governments need to commit and prioritise areas with abundant marine life — those very same areas favoured by fishing interests.

Also read: What it takes for the conservation of whale sharks

Further out in the no-man’s land of the open ocean, creating a successful conservation area requires countries to give some authority to a central body for its management, said Kristina Gjerde, an advisor for the International Union for Conservation of Nature, who is involved with negotiations over a planned treaty to protect international waters.

“The big challenge is some of the fishing states – will they end up trying to water down the treaty so much that it won’t have the same scope or ambition?” said Ms. Gjerde, who did not name specific countries which may attempt to stymie those efforts.

The United Nations has been working to broker deals on protecting both international and territorial waters. But the coronavirus pandemic has frustrated both sets of negotiations, and has twice delayed the U.N. Biodiversity conference, now set for October in Kunming, China.

The United Nations has held interim discussions on the high seas treaty to help delegations better understand others’ negotiating positions as they wait for formal talks to resume in August.

Nevertheless advocates worry about the loss of momentum.

But experts warn that ring fencing specific ocean areas for protection may not be enough. Underwater species are also being challenged by climate change warming the water and making it more acidic, with some fish species already shifting to new ranges to cope.

“I have a concern that we identify areas today that we think are important, and just draw a line around them, and then say: ‘okay, now everything’s fine’,” said Peter Tyack, a marine biologist at the University of St. Andrews in Scotland. Chances are, some species will move out of that range.

Back on the Greenpeace ship Arctic Sunrise, the crew is still scanning the vast ocean horizon through binoculars for evidence of life, while also sampling water for future DNA testing to determine which species frequent the plateau.

Three days after the team eavesdropped on the sperm whales hunting squid, the ocean became glassy flat. Watchers on the bridge spotted a burst of spray — a sperm whale was ploughing through the sunlit waters. It raised its distinctive V-notched tail toward the sky before disappearing back into the depths.