Home General What Are Hot Chocolate Bombs and Why Are They Suddenly Everywhere?

What Are Hot Chocolate Bombs and Why Are They Suddenly Everywhere? 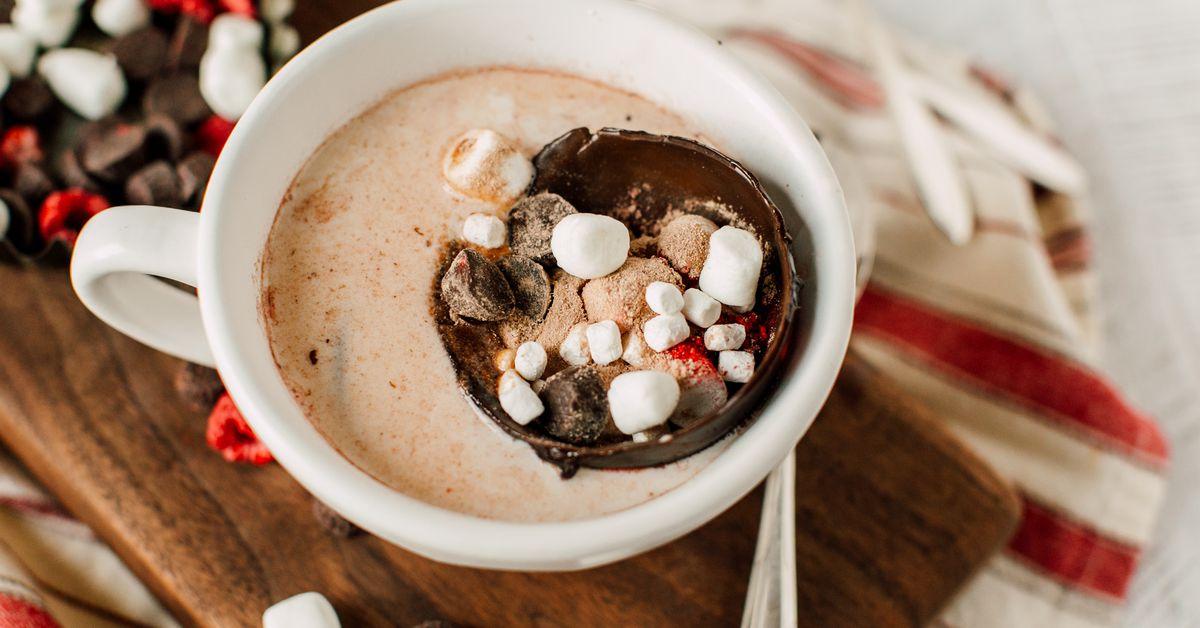 ‘Tis the season for hot chocolate, and an especially decadent version of everyone’s favorite holiday drink (suck it, cider) is exploding on TikTok and in suburban communities across the country. A basic-bitch packet of Swiss Miss mix just can’t compete with the visually compelling and viral glory of hot chocolate bombs.

For the unfamiliar, hot chocolate bombs, or glossy chocolate orbs filled with cocoa mix, marshmallows, sprinkles, and other edible baubles, are a truly over-the-top way to level up your cocoa game. Once plopped inside a mug full of warm milk, the bombs open up in dramatic fashion, revealing the goodies inside and creating a decadent cup of hot cocoa once stirred together.

Hot cocoa bombs are seriously trendy right now, written up in the New York Times, popping up in cafes, fancy chocolate shops, and even luxury retailers — Neiman Marcus is currently hawking a $32 hot chocolate bomb that’s painted pink and shaped like a snowman, made by Dallas chocolatier Kate Weiser. At the Ganachery in Florida’s Disney Springs, there’s a virally popular bomb shaped like Olaf from the movie Frozen. They’re also all over Etsy, including vegan options, extra-large bombs topped with whole Oreos, and white chocolate bombs decorated to look like unicorns.

On TikTok, where the hashtag #hotchocolatebombs has been used more than 181 million times, the world of hot chocolate bombs is much more homemade. Thousands of tutorials demonstrate how to carefully temper the chocolate and pour it into silicone molds. The half-spheres are left to harden, then filled with cocoa mix and marshmallows and “glued” together with melted chocolate. At the end of the process, the bombs are drizzled with even more chocolate and decorated with festive sprinkles. One video with more than 800,000 views depicts a “gender reveal” bomb that’s full of bright blue marshmallows.

The festive treats are also immensely popular in the 100,000-member strong Instant Pot Facebook group, where members are showing off how they’re using their pot as a double-boiler to melt the chocolate, and repurposing the silicone molds they originally purchased to make dupes of Starbucks’s popular sous vide egg bites to make their own hot chocolate bombs.

Considering that we’re all stuck indoors with plenty of time on our hands as we try to slow the spread of the novel coronavirus, there’s really no better time to learn the challenges in crafting fancy chocolate confections. Alongside the videos of perfectly crafted chocolate bombs are a litany of fail videos that showcase people who are learning exactly how difficult it is to temper chocolate properly and fill the spheres without breaking the bomb’s delicate shell.

But unlike the typical fail, these at least will still result in a delicious mug of hot chocolate. Nobody cares that your hot chocolate bomb looked more like an oddly shaped poop than a professional confection, so long as it doesn’t taste like one once it’s fully melted into a mug of warm milk.

And maybe this is just a good time to get experimental with hot chocolate. Also on TikTok, people are encouraging others to boil the metal grinders they use to crush up marijuana in milk to make a hot chocolate that will, allegedly, be delicious while getting you stoned. Unfortunately, that’s not exactly true. First, cannabis has to go through a process called decarboxylation to activate its psychoactive elements when eaten, and the idea of consuming hot chocolate that’s infused with decades of stoner hand germs and weed pesticides is just not appealing.

But while you might hope to avoid a mug of hot cocoa ruined by impotent weed dust, there’s no denying the appeal of a hot chocolate bomb, even if they are a little ridiculous and kitschy. We could all use a little magic, and rich dark chocolate, in our cups right now.

The freshest news from the food world every day

This article is auto-generated by Algorithm Source: www.eater.com