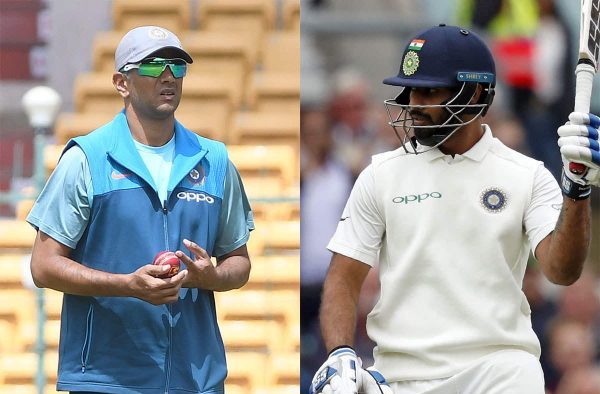 Team India batsman Hanuma Vihari earned a lot of plaudits for his match-saving heroics at the Sydney Cricket Ground enduring immense hamstring pain. He and Ravichandran Ashwin, who also had a soar back with a  couple of bruises on his rib, batted for over four hours to save the match.

It came on former India skipper Rahul Dravid’s birthday, which manifolded the magnitude of the partnership and the grit and determination the cricketers showed on the field. Vihari played a whopping 161 balls for his knock of 23 runs in the match while Ashwin partnered him efficiently with an innings of 128-ball 39.

The duo couldn’t even rotate the strike in the middle as Vihari was unable to run due to hamstring trouble. It was all about battling through the day and earning a draw for the team. The partnership earned Hanuma Vihari and Ravichandran Ashwin a lot of applauds including ‘The Wall’ Rahul Dravid. In a chat with India Today, Hanuma Vihari revealed what Dravid told him in the text message.

“Even after the Sydney Test, it was nice of him to send me a text. He said ‘Very well done, you did a great job’. That is the person he is and I respect him for that,” Vihari told India Today in an interview.

Meanwhile, Hanuma Vihari came up the ranks under the guidance of Rahul Dravid from the India A ranks. He spent a lot of time at the National Cricket Academy under the watchful eyes of Dravid to improve his skills. Vihari mentioned how the former India skipper played a key role in developing young cricketers like him, Shubman Gill, Mayank Agarwal, and others.

Also Read: Watch – T Natarajan Gets a Grand Reception in His Hometown

“I mean, after getting picked in the India A side. Those who were there in the side, Siraj, Saini, Shubman, Mayank, everyone who were part of that side played a lot of cricket together in India A. Also, in the last 3-4 years, we played many India A tours and he was the coach (Rahul Dravid).

“I don’t think we played so many India A tours before. So that bridged the gap between Ranji Trophy and the Indian team. We made the progress quickly. That’s the reason why we are playing our first game or the second game, we are ready for the challenge. We are not behind any other players. He made it possible,” he added.