Home General What’s next for Trump voters who believe the election was stolen?

What’s next for Trump voters who believe the election was stolen? 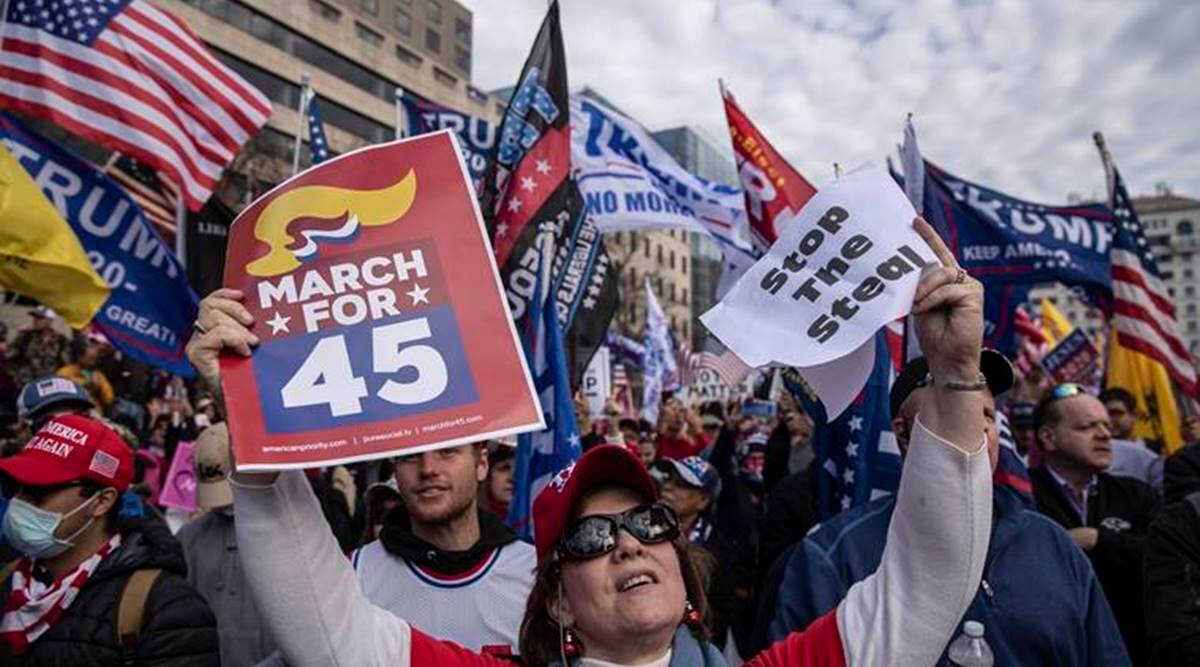 Supporters of President Donald Trump rally at Freedom Plaza in Washington, Dec. 12, 2020. Some supporters of President Trump are certain the election was fraudulent. Others arenÕt so sure. What becomes of their skepticism has important implications for American democracy. (Victor J. Blue/The New York Times)

Richard Everit walked with a heavy heart from his hotel to join a rally being held by President Donald Trump’s supporters near the White House on Saturday morning. The Supreme Court had rejected a lawsuit by Texas the night before, extinguishing what little hope he had left for the reelection of Trump, the man who had inspired the first vote of his life.

“I almost didn’t walk down after last night’s announcement,” said Everit, 55, who lives in western Pennsylvania. He liked what he said was Trump’s nose-thumbing at the elites of both parties, many of whom had been in power for years and appeared to have grown rich from it. But on this day, he was resigned to losing him as president. “At this point, it’s over,” he said. “You hate to say it.”

Supporters gathered for a similar event in November shortly after the election. But this time, the crowd at Freedom Plaza was far smaller and less hopeful, a mood that reflected a month of disappointments: Trump has lost dozens of court cases. The Supreme Court has rejected his cause twice. And Monday, the Electoral College gave the final legal stamp of approval to Trump’s loss.

One thing has not changed: the view, among Trump’s most faithful followers, that he is the rightful winner of the election.

Polls have presented a stark picture of alternate realities. A Fox News poll released Friday found that 77% of those who cast ballots for Trump said they thought the election had been stolen from him. Just 10% of Democrats agreed. Another survey, conducted by Bright Line Watch in late November, found that among those who said they approved of Trump’s performance in office, about half believed that he — not Joe Biden — would be inaugurated in January.

But interviews with dozens of people who voted for Trump reveal a more fluid picture. Some were die-hard supporters who were hungry for any information to support Trump’s claims — against all evidence — that he won the election. For these voters, no data could convince them otherwise.

Others were more uncertain. Nearly all of the people interviewed said they believed at least some fraud had been perpetrated, but whether that added up to Trump’s being the true winner was much harder to know.

The reasons for doubting the outcome were many. Misinformation played a role. So did signaling by Republican leaders, first among them Trump.

Partisanship was powerful, too: Some were so distrustful of Democrats that they were open to arguments about fraud in large part because Democrats were not. Still others said election fraud was simply not that unusual a phenomenon. And in a sign of how much Americans of both parties are living in political bubbles, many expressed surprise that Biden could have won, given that they knew no one who voted for him.

“Do I believe that Trump and Giuliani and their road show is 100% correct?” asked Richard Houskamp, who owns a technology company in Grand Rapids, Michigan, referring to attempts by the president and his personal lawyer, Rudy Giuliani, to present evidence of a stolen election. “I’m not on board with that.” But he said he also did not believe Michigan state officials when they said there was no evidence of fraud.

Houskamp said he did not think Trump would have won nationally, even after the allegations of fraud were accounted for. But he said all Americans should be open to hearing the arguments, and he was deeply frustrated that half of them were not.

What happens next is a critical question for American democracy. What will become of the belief that the 2020 presidential election was in some way illegitimate? Will it melt away along with Trump’s prospects for winning, and vanish completely when Biden is inaugurated? Or will it fester, nursed by Republicans in power, and metastasize into something that could be a rallying cry for nationalists for years to come?

It is the perception — often more than the reality — that matters, said Keith A. Darden, a political science professor at American University in Washington.

“If enough people believe that a government is not elected legitimately, that’s a huge problem for democracy,” he said.

Darden, who studies Ukraine and Russia, sees parallels between the United States and the countries he focuses on. They all have elected leaders who, for their own political gain, stoke conspiracies about terrible things the other side is doing, as well as deeply distrustful societies that are unable to agree on basic facts or reach any kind of shared reality. Darden said that Republican leaders who encouraged Trump’s claims of a stolen election were going down a dangerous path — one whose end might be unpredictable.

“Once reality gets degraded, it’s really hard to get it back,” he said.

There are also some historical parallels in the United States, according to David Blight, a Civil War historian at Yale, who noted that in 1860 a number of Southern states refused to accept the result of the election when Abraham Lincoln won. He pointed out another similarity: Turnout in the elections around that time was among the highest in the nation’s history, because, similar to the stakes people talk about today, “the future of the republic was on the ballot.”

Beyond the skepticism about who would take office in January, the voters who were interviewed voiced a growing and broadly held distrust of the U.S. electoral system that Republicans in power have worked hard to encourage.

“My trust in elections is at an all-time low right now,” said John Kenney, 55, a test prep instructor in Los Angeles who voted for Trump. “I thought it was a pretty good system. And now I don’t know who voted, or how they voted, or what they voted on or who counted what. I just don’t trust it.”

Kenney is a new Republican. He voted for Barack Obama twice. He did not vote in 2016, because he said he had been turned off by both candidates, but he voted for Trump this year after bristling at what he characterized as the left’s growing intolerance for people like himself.

“You are white so you have original sin and you can never do anything about it except publicly apologize to everyone and we will decide if you get to keep your career or not,” he said, describing an attitude he associated with Democrats. He said he felt more certain of his party switch during the summer, as protests sometimes turned violent and Democratic leaders, he said, failed to contain the chaos.

“Trump’s over,” Kenney said. “He’s irrelevant. But the Republicans aren’t going to forget this. The resentments are going to remain.”

Everit, who went to the rally Saturday, used to be a figure skater in the Ice Capades and now works in maintenance at a hotel. He didn’t vote in 2016, either. But he said he went to the polls this time because he was worried Trump might not win, and because he did not like the long-established leaders of both parties.

“You’ve lost touch with your people if you are pulling a hundred dollars of ice cream out of your freezer,” he said, referring to a video this year of House Speaker Nancy Pelosi showing her freezer packed with ice cream during the pandemic.

Everit did not believe Biden won the election, but he was resigned to the fact that Biden would take office next month. Everit took a picture in front of a red bus that said March for Trump, and then drove home to Pennsylvania.

“I probably won’t vote again,” he said. “Democrats will like that.” Just how widespread is the belief that Trump was the real winner? In areas where Trump won an overwhelming majority of votes — very, voters said.

“Around here, everybody thinks the election was stolen from Trump,” said Evelyn Adkins, 56, a bakery worker in Letcher County, Kentucky, where Trump won 79% of the vote. “I think they will always say it was stolen from him. They will not throw fits and burn buildings. But it will linger. It’s not going to go away.”

And with fewer people knowing — or living around — those on the other side of the political divide, that sense of suspicion is heightened.

“There’s no doubt in my mind that it was rigged from the start,” said Theda Kasner, a retired medical worker in Wisconsin. She said she was shocked that Biden got as many votes as he did in her county because she knew hardly anyone who voted for him. Every yard in her community had a Trump sign. Adding to her skepticism about Biden’s victory was the result in Arizona, a state she lived in for 20 years.

“Believe me, Arizona is Republican,” she said. “I just sat there as the votes were coming and I told John,” she said, referring to her husband, “‘There’s something wrong here. This is really screwed up.’”

But many others were much less certain about the fraud allegations, even some who had attended the two rallies in Washington for Trump.

Does it add up to a Trump victory?

Cabassa, 33, a veteran of the Coast Guard, had never voted before 2020, but became involved in Republican politics after 2016 because he liked Trump’s pitch that he was an outsider who went against the establishment.

He said Democrats seemed to have been after Trump from the start, first with the Russia investigation and then with the impeachment. And he saw hypocrisy in their election complaints.

“I’m like, wait, how did we go from the most unsecure election with so much interference in 2016 to the Democrats saying this was the most honest election and all of a sudden we are supposed to 100% trust it?” he asked.

But plenty of other supporters said they still believed Trump could prevail, like Julie Claveria, 63, a retired ophthalmologist who traveled nine hours from western North Carolina to attend the rally Saturday.

“Trump may have something else up his sleeve,” she said, wearing a mask and holding a large American flag. “You never know. I’m going to hold out until Jan. 20.”

Claveria said she was worried about what would happen during a Biden presidency. Biden, she said, “is basically planning to get rid of personal property and all of our freedoms.”

Trump is trying to stop that, she added, but every institution has obstructed him.

“I think it’s a big coup against our country,” she said. “The FBI’s involved. So is the CIA. It’s crazy — even the judges.”

Shortly after 12:15 p.m. she watched Trump fly overhead in a helicopter.

“Donald, we see you, buddy!” shouted her husband, Kevin Haag, 67, a pastor and retired landscaper.

She cheered, too. After a while she said: “I think a lot of people are giving up. I’m not. But it’s very discouraging. At the end of the day, we won’t have a republic anymore.”