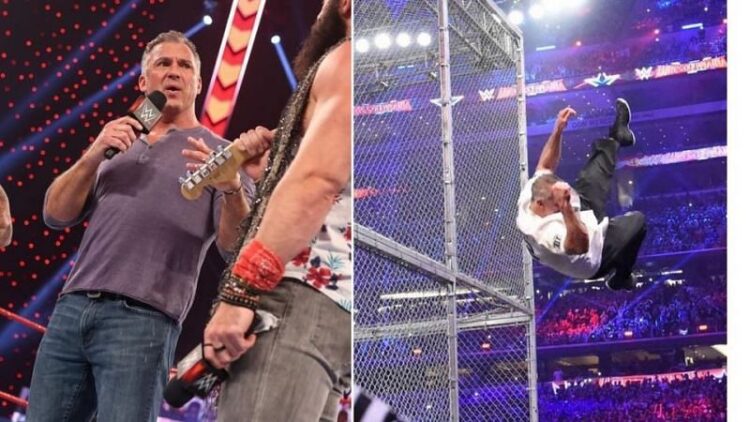 Vince Russo recently spoke about Shane McMahon and Braun Strowman’s upcoming WrestleMania match. Russo predicted that since it was a steel cage match, he could see Shane McMahon taking a big bump off the top of the cage. Russo then opened up about why he didn’t want Shane to take the risk.

Shane McMahon will face Braun Strowman at WWE WrestleMania 37. McMahon has been tormenting Strowman for weeks. Elias and Jaxson Ryker have served as backups for McMahon throughout that time.

On this week’s edition of Sportskeeda Wrestling’s Legion of RAW, Vince Russo opened up about not wanting to see Shane McMahon take a big bump at WrestleMania this year.

We have seen Shane do some amazing things at WrestleMania over the years, but Russo said that because of Shane’s age, he didn’t want the latter to put himself at risk:

“Now we’re inside a cage. I’m going to call this right now. I’m gonna say it because I’ve been saying it for a couple of years. Shane McMahon is going to continue to do this stupid… he will do it until he gets hurt. Shane doesn’t understand. His mind may be telling him that he’s 34 but his body is not 34. He’s so much like his old man. Now we’re in a cage, now what am I going to jump off and go through?”

Braun Strowman got to pick the stipulation for his match against Shane McMahon at WrestleMania. We found out last night on RAW that Strowman had chosen a steel cage match. This had been preceded on the night by Shane McMahon putting up Braun Strowman’s ‘report card’ on the Titantron for the WWE Universe to see.

The report card segment was followed by Strowman facing Jaxson Ryker in singles action, with Shane and Elias at ringside. Strowman quickly won the match before chasing Shane around the ring and back inside.

Elias then blindsided The Monster Among Men as he and Shane McMahon rained down blows on the former WWE Universal Champion. Braun Strowman was still too powerful for them and forced the heels to scatter.

If any quotes are used from this article, please give a H/T to Sportskeeda Wrestling.