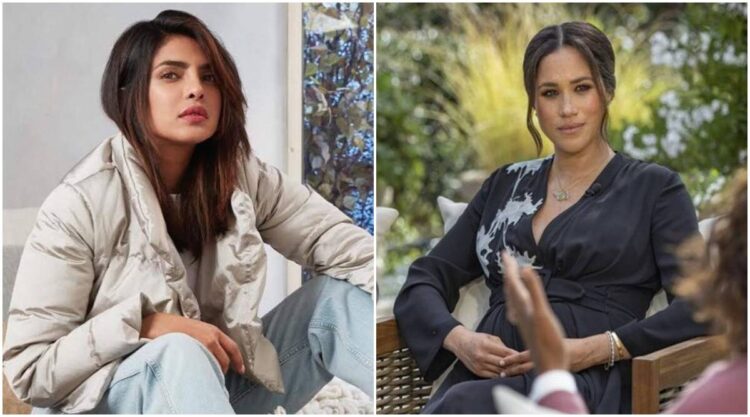 While many celebrities like Serena Williams, Jameela Jamil, Ava DuVernay and Gabrielle Union have voiced their support, one person who once stood up for Meghan and slammed the ‘racist’ treatment by UK media, Priyanka Chopra, is yet to react. The actor’s sister-in-law, actor Sophie Turner, has also reacted to the interview now.

“Meghan Markle probably isn’t going to see your negative comments saying you don’t believe that she was suicidal… but your friends and family who have been in the past will, and they’ll never come to you for help. Don’t be that person,” Sophie’s message read as she addressed the trolls.

Priyanka, who also attended Meghan and Harry’s wedding, had earlier set the narrative right on multiple occasions.  In 2017 when Priyanka had appeared on Wendy Williams’ talk show where the host had referred to PeeCee’s Suits co-star and good friend Meghan Markle simply as “Prince Harry’s girlfriend”, Priyanka had quickly reminded the host how there is more to Meghan Markle than just being Prince Harry’s girlfriend. She had said, “Also, Meghan Markle, actress, ‘Suits,’ her achievements!”

Yet again, in 2019, Priyanka had slammed the ‘racist’ treatment of Meghan Markle by the UK media. Priyanka had opened up about the criticism Meghan had faced by the UK press was more to do with her biracial heritage. She was quoted in a Sunday Times interview as saying, “Of course, it has to do with racism, it’s an obvious reason.”

Priyanka had also called Meghan a beautiful person, who did not change even after marrying Harry Windsor. She had said, “The beauty of Meg is that she’s been herself through all of this. A lot of people got to know her after everything, but I knew her before (she started dating Harry) and she’s the same chick. ”

Priyanka Chopra Jonas and Meghan Markle became friends when they appeared together in The Suits. Priyanka was also invited for the royal wedding of Markle with Prince Harry at the Windsor palace in 2018. However, Priyanka did not attend Meghan’s high profile baby shower when she was pregnant with Archie, and then Meghan gave Priyanka and Nick’s wedding a miss. However, Chopra-Jonas has always maintained that the two are in good terms and had also congratulated Markle when Archie was born.

For now, Priyanka Chopra is beaming with the success of The White Tiger, the film she produced and starred in, as it has entered the race for British Academy of Film and Television Arts (BAFTA) Awards. The film’s actor, Adarsh Gourav, has been nominated in the lead actor category and the film’s director Ramin Bahrani has bagged a nomination in the adapted screenplay category. Chopra is also the executive producer of the film along with Ava Duvernay.