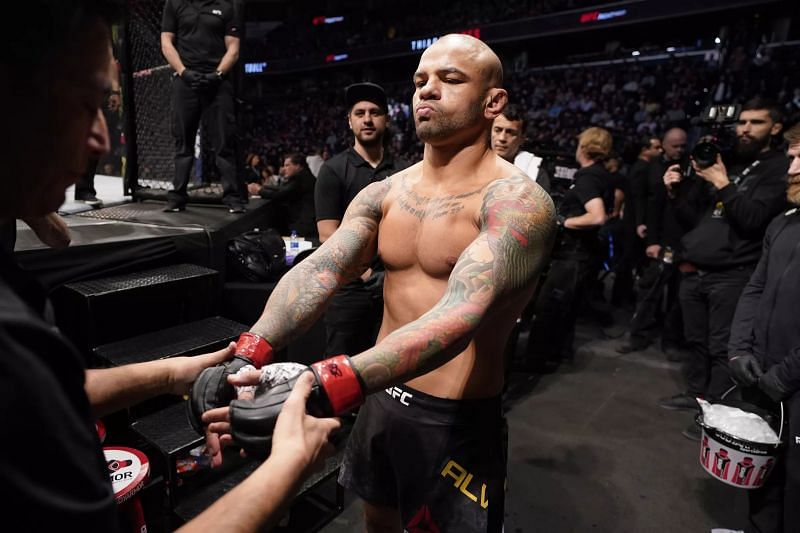 The lion’s share of success that Dustin Poirier had in his rematch against Conor McGregor was attributed to UFC veteran and American Top Team’s striking coach Thiago Alves. The first person to acknowledge that following the UFC 257 event was none other than Conor McGregor himself.

“The kicks accumulated, for sure… I knew when I saw he (Dustin Poirier) had Thiago Alves in his corner”, said Conor McGregor.

Thiago Alves has had a kick-heavy fighting style from the beginning of his career, and it is evident from the fact that five of his eight knockout wins in the UFC have resulted due to kicks or knees. A familiar name for UFC fans from the Zuffa and Spike TV era, Thiago Alves had been a challenger to Georges St-Pierre’s welterweight throne. A staple of UFC’s welterweight division for over 14 years, Thiago Alves fought 27 times in the UFC before transitioning to Bare Knuckle Fighting Championship in January 2020.

A Brazilian born and raised in the city of Forteleza, Thiago Alves has been in the competitive sphere of MMA since he was 15 and made his UFC debut on the second-ever UFC Fight Night card in October 2005, aged 22. On his way up through the welterweight rankings, Thiago Alves went on a tear and defeated Karo Parisyan, Josh Koscheck and former champion Matt Hughes, who was the most dominant champion in UFC history at the time.

After the welterweight title fight against GSP, Thiago Alves’ career has been marked with injuries, health, and weight issues. The fighter had to pull out of fights an astonishing eight times while missing weight on multiple occasions. Lingering injuries forced Alves to see long periods of inactivity in his later career.

That’s surgery 4 in a year. You can call me the bionic Pitbull! Now the recovery starts! http://t.co/h3TIOHKSHy

After an unsuccessful stint at lightweight, Alves returned to his natural weight class, but following a loss against Tim Means, Thiago Alves was released from the UFC in January 2020. In an interview with MMA Fighting following his release, Alves said that he wanted to be remembered as the best knockout artist in the history of UFC’s welterweight division.

“I’ve done everything for this sport. The only thing I haven’t done was win the world title, but I fought the best welterweight of all times, Georges St-Pierre. A 19-year-old kid that left Fortaleza for Miami with 50 dollars in his pocket…I want people to remember me as someone who worked hard and believed in his dream. I did everything my way. I’ve done a lot of sh*t, but I’ve learned with my mistakes and kept moving forward without blaming anyone else but me. I have no complaints”, Alves said.

Thiago Alves went on to fight for Bare Knuckle Fighting Championship and won his debut fight against Julin Lane via split decision. He is expected to make his return on March 12, 2021.