Home General Who Takes the Eurostar? Almost No One, as the Pandemic Fuels a Rail Crisis

Who Takes the Eurostar? Almost No One, as the Pandemic Fuels a Rail Crisis 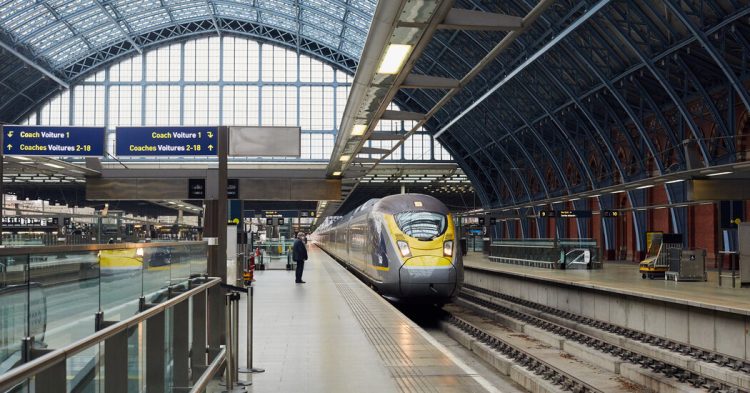 PARIS — Earlier this month, David-Alexander Leduc rolled his suitcase down a nearly empty platform at the Gare du Nord train station and scanned his ticket at the turnstile to board the sole Eurostar leaving that day for London.

Mr. Leduc used to shuttle regularly for business on one of at least 17 high-speed Eurostar trains that ran back and forth daily, morning to night, through the underwater Channel Tunnel linking Britain and France.

He was lucky there was a train to take.

“It’s constraining,” said Mr. Leduc, who lives in London and has cut back hopping over to France to meet clients as a plunge in ridership from national quarantines forces Eurostar to slash services. “But you have to adapt.”

On Monday, a bad year for Eurostar suddenly turned worse. All service from London to Paris, Brussels and Amsterdam was suspended for at least 48 hours, as governments on the continent banned travelers from Britain, a precaution as health officials try to control a new variant of coronavirus sweeping across parts of England. Trains will continue operating from Paris to London, the company said.

Eurostar, the sleek and speedy mode of travel that ties London, Paris, Amsterdam and other cities, is a shadow of itself, crippled by the pandemic. Its ridership has all but vanished, and its finances are threatened. More than 90 percent of its employees have been furloughed, one of its union said.

Its woes reflect a struggle for survival playing out across the European train industry, as the pandemic continues to upend the business of transportation. Like Europe’s airlines, the railway sector is facing its worst crisis in modern history.

Ridership has slumped 70 to 90 percent amid lockdowns and social-distancing requirements, pushing the industry toward a staggering €22 billion in losses this year, around the same expected for European airlines, according to CER, a Brussels-based trade group representing passenger and freight train operators. Thousands of trains have been mothballed, and tens of thousands of workers are on government-subsidized furloughs.

“It’s a totally extraordinary situation,” said Libor Lochman, CER’s executive director. “There is no comparison for it, and it can and will lead to the bankruptcy of a number of companies, unless there is the political will to prevent it,” he said.

With more than nine billion passengers and 1.6 billion tons of freight carried on tracks stretching from Spain to Sweden, Europe’s trains are as vital as planesfor whisking people and goods across the continent.

But even after the pandemic, analysts say work-from-home practices, online socializing and the rise of internet shopping will have a lasting impact on rail travel of all types, leaving privately owned companies like Eurostar and state railways including DeutscheBahn in Germany and SNCF of France, Eurostar’s biggest shareholder, struggling to survive.

The European Union needs the industry to remain viable: It has made rail transport a centerpiece of the European Green Deal, a landmark environmental policy that aims to make Europe the first climate-neutral continent by 2050. The plan includes doubling high-speed rail and freight traffic, and expanding electric-powered trains and tracks to slash carbon emissions.

Eurostar, which employs 3,000 people and has its headquarters in London, has appealed to the British and French governments, citing its role as a low-carbon mode of travel, after the aviation industry and public rail received billions in financial support.

“There is a risk that this iconic service could be left to fail,” Eurostar’s chief executive, Jacques Damas, wrote in an op-ed article.

As an independent train operator, the company isn’t eligible for direct aid in Britain, but it is pressing on other fronts. Eurostar is seeking relief from British business taxes, and especially the steep tolls it pays for using train tracks in Britain, which Mr. Lochman said can sometimes cost several hundred euros per mile.

State railways are getting billions in support. SNCF, which faces losses of up to €5 billion, with only a fraction of its high-speed TGV trains currently running, received a €4 billion capital injection from the French government on Tuesday. DeutscheBahn’s expected losses of €5.6 billion this year will be offset by up to €4 billion in rail support from the German government.

Eurostar is the biggest and most well known of the bunch. Owned by a consortium including SNCF, which holds a 55 percent stake, as well as investment firms and the National Railway Company of Belgium, it was already bracing for a potential hit to business from Britain’s decision to leave the European Union, which officially takes effect on Jan. 1.

Pandemic restrictions have dealt it a swifter blow. After record profit in 2019, when 11 million people crowded onto its trains, Eurostar said it was now “fighting for its survival” after a “total collapse in demand” for international rail travel.

Passenger numbers have plunged 95 percent since March. Revenue fell by €340 million in the first half, down 61 percent from a year ago. From a peak of running more than 60 trains a day, Eurostar cut service to one daily round-trip between London and Paris, and one on its London-Brussels and Amsterdam routes.

Until this week, Eurostar was temporarily adding more daily trains ahead of the Christmas holidays. with plans to return to a reduced schedule in January.

The suspension of service out of London will depend on whether European governments agree to accept British travelers. “We are waiting further detail from the governments on restrictions beyond this initial 48 hour period,” the company said Monday.

Eurostar recently secured more than 200 million British pounds in financing from its shareholders, but the money is finite. A spokeswoman said the outlook for 2021 “continues to be significantly lower passenger numbers and loss of revenue than can sustain our business.”

Unions, which typically fight management, are aligned with Eurostar executives in pushing for government help.

“Until Covid broke, we had a business that was on the up and up,” said Mick Lynch, a representative of the National Union of Rail, Maritime and Transport Workers, which represents Eurostar’s employees in Britain. “Now, we are looking at 5 percent of previous revenue and passengers on a good day,” he said. “No business can operate on that,” he said.

Even after a vaccine is rolled out, Europe’s major rail companies face a precarious transition period. A full turnaround for passenger railway operators is unlikely before 2023 or 2024, and even that will depend on government support, said Maria Leenen, a founder of SCI Verkehr, a Hamburg-based rail industry consultancy.

As the industry maps out a post-pandemic recovery, analysts say it will need to inspire new loyalty in riders, in part by promoting trains as an ecological way to travel as Europe moves toward a greener future.

Companies are also reviewing pricing models that worked fine when business executives and selfie-taking tourists swarmed to Europe’s capitals, but are less viable as a pandemic-induced recession cuts into consumers’s spending power.

With fewer trains, ticket prices have been climbing to sometimes astronomical levels that have sent even environmentally conscious commuters searching for airplane flights that are up to 75 percent cheaper.

Mr. Leduc, an industrial consultant for British and French start-ups, paid about 400 euros (about $485) for his round-trip ticket, about double the normal fare. He said he paid it because the trip was for business. But as he plans holiday travel back to France with his wife and daughter, he is mulling whether to take easyJet, a discount airline, after realizing that train tickets for his family could cost nearly €1,000.

“If Eurostar prices stay in the stratosphere, I won’t hesitate to start taking the plane, even if it’s more tiring, longer and more polluting,” he said.

Even when quarantines are lifted, people may not use trains as frequently, including lucrative business travelers who thought nothing of hopping on the Eurostar to Paris for a meeting, then returning to dine in Soho that evening. Some riders will have ditched the train for cars. In metropolitan areas, commuters may turn increasingly to bicycles for short-distance travel.

Still, the pandemic is unlikely to wipe out Europe’s love affair with trains. People will probably gravitate back to their old mobility behavior as the pandemic fades, said Ms. Leenen of SCI Verkehr.

“But the trains will just be a little less full,” she said.