Home SportsIPL Who will be the 4 overseas players in Rajasthan Royals (RR) Playing XI for IPL 2021?

Who will be the 4 overseas players in Rajasthan Royals (RR) Playing XI for IPL 2021? 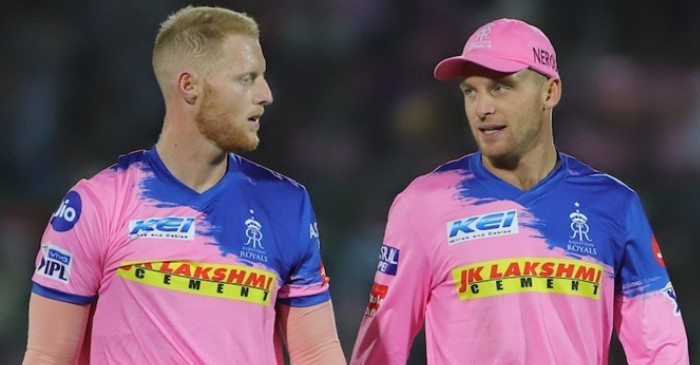 Rajasthan Royals (RR) endured another difficult IPL season last year as they finished on the last spot after the conclusion of the league stage. The franchise made a huge decision to release it’s skipper, Steven Smith ahead of the IPL 2021 auction. As a result, Sanju Samson was appointed as Rajasthan’s skipper for the upcoming season. Kumar Sangakkara was appointed as the team’s Director of Cricket, in another big development.

Jofra Archer is ruled out for the first few games this season, after undergoing a successful hand surgery. Rajasthan Royals bought Chris Morris for a sum of Rs.16.75 cr at the auction, making him the biggest buy in IPL history. Mustafizur Rahman, Bangladeshi pacer was another overseas player added to the RR squad.

Jos Buttler will open the innings for Rajasthan Royals

Jos Buttler did not have the best IPL campaign last season, as he managed to score just 328 runs in his 13 innings at an average of 32.80. The Englishman opened the innings for majority of the season, but was demoted to number five towards the end of the season. He scored his best knock of 70 runs of last season against Chennai Super Kings, coming in from the middle over.

However, Jos Buttler is expected to open the batting for Rajasthan Royals (RR) this season, given his handsome record at the top of the innings. He amassed 548 runs in IPL 2018, at an average of 54.80. Out of several qualities that the Englishman possesses, it is his ability to score runs at a staggering pace. He has a strike rate touching 150 in IPL cricket.

Ben Stokes will most likely bat in the middle-order

Ben Stokes played only eight games last season, after he missed the initial part of IPL due to personal reasons. The all-rounder’s highlight of the season came against Mumbai Indians, where he scored an unbeaten knock of 107 runs. In all, he accumulated 285 runs last year, at an average of 40.71 and a strike rate of just over 142.

With the ball, Stokes bowled only 15 overs and managed to pick up two wickets. This season, Ben Stokes is expected to operate as a pure batsman and is most likely to come in at number four, after Sanju Samson. Steve Smith’s departure from RR, gives the Englishman a prominent role in his side’s batting unit.

Chris Morris made the headlines at the auction this year, after he was purchased for a whopping sum of Rs 16.75 cr. The South African all-rounder was released by Royal Challengers Bangalore despite having a good season, where he picked up 11 wickets in his nine outings. However, Morris has the tendency to pick up frequent injuries which could have played a part in this decision. At Rajasthan Royals, Morris is a certain starter and will hope to deliver the goods with the ball. He can also strike a few hefty blows with the bat towards the end of the innings.

It will be a toss-up between Mustafizur Rahman and AJ Tye for a place in the playing eleven. However, the Bangladeshi bowler is likely to get the nod over his Australian counter-part, given the extra variation he provides to the side’s bowling attack. Being a left-armer, he can surely trouble a few right-handed batsman at the top of the order.

Jofra Archer will reclaim his spot in the playing eleven, once he is deemed fit enough. Jofra Archer was the MVP of last season, where he picked up 20 wickets and had an economy of under 7.