Home SportsIPL Who will be the 4 overseas players in Sunrisers Hyderabad (SRH) Playing XI for IPL 2021?

Who will be the 4 overseas players in Sunrisers Hyderabad (SRH) Playing XI for IPL 2021? 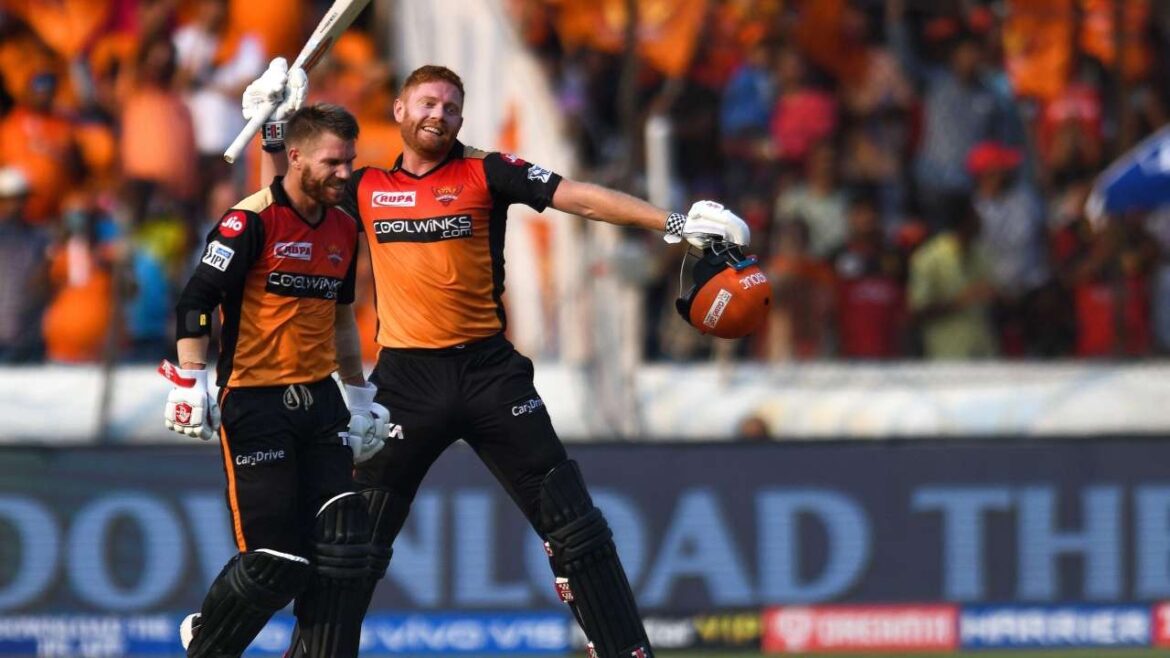 Sunrisers Hyderabad (SRH) continued their reputation of being one of the most consistent sides in Indian Premier League (IPL) as they reached their fifth consecutive playoffs last season. Under the able leadership of David Warner, the ‘Orange Army’ made a late recovery and managed to sneak in to the playoffs.

Overseas players have also been a vital part of SRH’s squad. David Warner has been one of the prominent overseas players in IPL history, winning the Orange Cap on three occasions. ICC T20I Player of the Decade, Rashid Khan has spun his magic with the ball in the past four seasons. SRH have kept the core of their team unchanged for the upcoming season, and are expected to have another successful season.

Jonny Bairstow is coming into the IPL 2021 season on the back of a terrific ODI series against India. The right-handed batsman was the top scorer in three match ODI series and was adjudged the player of the series. Bairstow is expected to open the innings alongside skipper, David Warner in IPL 2021. The Englishman played 11 matches last season, scoring 345 runs at an average of 31.36.

Bairstow was dropped in the latter stages of the tournament after a string of low scores. Wriddhiman Saha was given an opportunity to open the batting alongside Warner. However, this season, the Englishman is likely to get the nod over his international teammate, Jason Roy and Kiwi skipper, Kane Williamson for a place in the starting eleven.

David Warner has won the Orange Cap on three occasions

David Warner is without a doubt, the most important player for the Orange Army. The Australian has amassed 5254 runs in his 142 matches in IPL, at a staggering average of 42.71 and a strike rate in the 140s. Warner has collected the Orange Cap on three occasions in 2015, 2017 and 2019. The stylish left-hander led his side to the IPL title in 2016, when they defeated Royal Challengers Bangalore in the final.

Last season, David Warner scored 548 runs in his 16 inning sat an average of 39.14 and a strike rate of just over 134. He will continue to open the batting for his side and will hope to lead Sunrisers Hyderabad to their second IPL Title. Warner’s highest tally of runs in a single IPL season came in 2016, when he amassed 848 runs at an average of 60.57 which includes a match-winning knock in the finals against RCB.

Jason Holder was one of the main reasons why SRH’s hopes of reaching the playoffs remained alive. Upon his arrival in UAE, the West Indian made an instant impact, picking up 14 wickets in just 7 games at an average of just over 16.

Moreover, it was his partnership with Kane Williamson in the eliminator against RCB, that helped his past the finishing line. Holder is expected to retain his spot in the team, once he returns from his international duty. In the meanwhile, SRH can consider playing Mohammad Nabi, the veteran all-rounder who has a good record playing in the IPL.

Rashid Khan would walk into the starting eleven of any IPL side he plays for. The Afghanistan leg-spinner has troubled the batsman with his bowling variations over the past four seasons.

He has played 62 IPL matches so far, picking up 75 wickets at an average of 20.49. He has an impressive economy rate of just 6.24 which is an incredible figure given the current scenario of T20 cricket, in which batsman have an upper hand over the bowlers. Together with David Warner, he is one of the players whose place in the side can never be questioned.