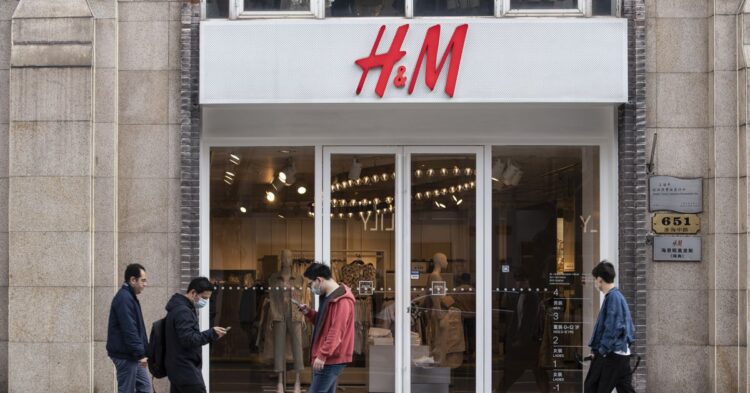 Chinese consumers, e-commerce sites, and social media platforms are boycotting prominent international retailers, such as H&M, Nike, and Uniqlo, in the wake of sanctions against the Chinese government, backed by the United States, the European Union, Britain, and Canada.

Chinese officials have been accused of human rights abuses in the Xinjiang region of northwestern China. At least 800,000 and possibly more than 2 million Uyghurs, a Muslim ethnic minority group, have been detained in “reeducation centers” in Xinjiang, according to testimony from the US State Department, where they had to undergo psychological indoctrination programs. Many Uyghurs are also forced to work in factories manufacturing clothing and other goods sold at home and abroad. Xinjiang is a major cotton-producing region in China, and is a central part of the global retail supply chain.

Last March, the nonpartisan think tank Australian Strategic Policy Institute published a report detailing how at least 82 foreign and Chinese companies have direct or indirect ties to the Xinjiang region and beyond based on their supply chain. Several major corporations listed by ASPI include Amazon, Apple, Dell, H&M, Nike, Nintendo, Uniqlo, Victoria’s Secret, and Zara. Popular fashion brands and apparel companies have specifically been urged to divest supply chain ties from the region by End Uyghur Forced Labour, an international coalition of more than 190 human rights and advocacy organizations. The Better Cotton Initiative, a global organization that promotes sustainably grown cotton, also suspended parts of its work in Xinjiang last year.

Western shoppers, too, also began to take notice; consumers and human rights groups aren’t allowing retailers to turn a blind eye to international labor abuses. These organized actions led H&M to release a statement in September, acknowledging that it is “deeply concerned” by the reports of forced labor and discrimination in the Xinjiang area. The retailer declared it will no longer source cotton directly from the region. Other brands like Inditex (Zara, Massimo Dutti) and PVH (Calvin Klein, Tommy Hilfiger) also published statements in 2020 acknowledging concerns of labor abuse in the region.

In recent days, however, some have quietly retracted them, as outrage from China over these accusations has arrived, six months later. The Washington Post reported that Chinese state media outlets coordinated the call for an H&M consumer boycott. Translations of H&M’s and other international retailers’ months-old corporate statements were circulated on Chinese social media, Insider reported, some of which were posted by Chinese state media and shared by citizens. Government officials also denounced the allegations, calling on H&M to “be more clear-eyed and distinguish right from wrong,” according to the South China Morning Post.

The consumer outcry prompted Chinese platforms to not only scrub H&M’s clothing listings, but also its addresses and geolocations. On Weibo, a Chinese social media site, more than 32 million people used the hashtag “I support Xinjiang cotton.” Dozens of Chinese celebrities openly cut ties with so-called “blacklisted” brands, including high-profile K-pop stars of Chinese descent, like GOT7’s Jackson Wang and EXO’s Lay Zhang, who have dropped contracts with retailers out of national solidarity.

In a YouTube video published by the China Global Television Network, a network owned by the Communist Party of China, Chinese bystanders across age and gender condemned H&M for their “nonsense” accusations, and expressed hesitation toward buying from the retailer again. “I think we should support our national brands,” one woman said. “China’s power is growing. The quality of our national brands will also get better.”

As tensions between the US and China heat up, Western companies will have more than a consumer boycott to worry about. Given China’s standing as the second-largest cotton producer in the world, many retailers and brands that sell cotton products will likely have to reassess their ties with Chinese suppliers, who either have direct or indirect ties to the Xinjiang region. About 87 percent of China’s cotton is produced there, and Xinjiang is responsible for about 1 in 5 bales of cotton on the global market, according to the People’s Daily, a state-run newspaper.

While retailers like H&M claim they will stop sourcing directly from Xinjiang, it’s possible brands have to maintain ties with other Chinese suppliers for outsourced textiles, and there’s no way for retailers to discern how those materials were made. The ASPI report detailed that some brands said “they had no direct contractual relationship with the suppliers implicated in the labour schemes, but no brands were able to rule out a link further down their supply chain.” In other words, retailers simply have to take suppliers at their word.

So why won’t brands commit to overhauling their supply chains and bring them back to the US? The short answer is that it would be very, very expensive to do so. Since the 1970s, American retailers began slowly migrating manufacturing overseas to textile mills and factories in Asia and Latin America. It was a capitalistic no-brainer: Labor and raw materials were cheap. When the North American Free Trade Agreement was passed in 1994, it eliminated import duties from North American countries, like Mexico, so retailers were further incentivized to outsource their operations.

“There’s a lot of unfairness baked into the structure of global supply chains, specifically between brands, retailers, and suppliers,” Penelope Kyritsis of the Worker Rights Consortium told Vox in August. “From where we stand, if brands don’t know where their cotton or textile comes from, they’re choosing to not know. They must do their due diligence and commit to ethical supply standards.”

Retail supply chains are rarely transparent. As Vox’s Meredith Haggerty explored in her piece on American manufacturing, many CEOs can’t name the factories and facilities that create their products: “Because most pieces of a given chain are independently owned and subcontracted, [it’s] easy to brush aside when it comes to both corporate and consumer responsibility … While everyone has a vague awareness of factory disasters and low wages and child labor, it’s easier and more comfortable not to know.”

It has taken years for the international community to be as vocal as it is now about the plight of the Uyghurs. The solution, though, could be costly for companies that have relied on cheap, outsourced labor. It’s no longer enough for retailers to sidestep the issue, from the standpoint of a Western consumer. Speaking out, however, means potentially alienating a huge base of shoppers from China, the world’s biggest economy. International brands will eventually have to pick a side, but the current state of US and Chinese supply chain linkages means that the two countries are still interdependent and intertwined.