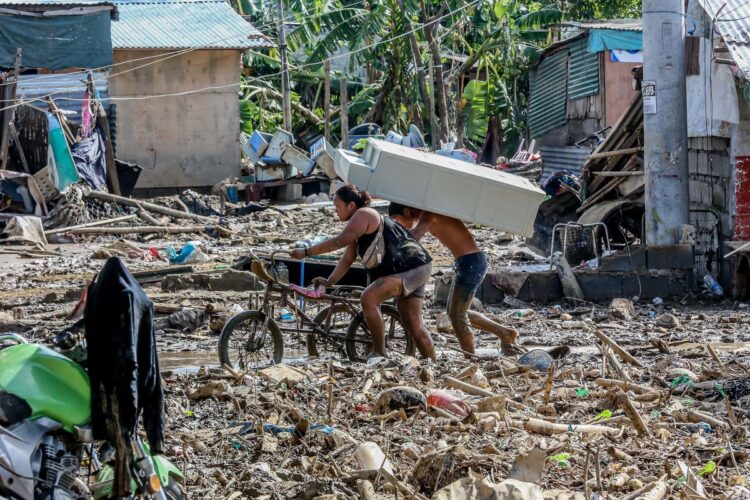 Hurricanes get your attention. They are powerful storms that cause life-altering changes for people and communities. Hurricane Michael (2018), for example, destroyed coastal and tourist communities and then plowed into my state of Georgia with 100+ mph winds destroying critical agricultural crops. While we tend to be U.S-centric, hurricanes are part of a broader class of storms called tropical cyclones. As climate changes, tropical cyclones have been consistently studied to understand how they will respond to atmospheric (and ocean) warming. A new study affirms that tropical cyclones, including hurricanes, are likely to become more dangerous.

A new review study just published in the journal ScienceBrief Review analyzed over 90 peer-reviewed articles to see if there was a consistent signal of human activities affecting typhoons, hurricanes, and other tropical cyclones. As a reminder, these are studies that have been vetted, reviewed, and critiqued by experts. They are not opinions in social media, blogs, or editorials. The researchers were made up of a team of scientists from Princeton University, University of East Anglia, and the National Oceanic and Atmospheric Administration (NOAA).

According to a press release from the University of East Anglia, “studies showed growing evidence that climate change is probably fueling more powerful hurricanes and typhoons, a trend that is expected to continue as global temperatures rise, amounting to a roughly 5 per cent increase in maximum wind speeds if the globe warms by 2 degrees Celsius.” The 2020 Atlantic hurricane season had 30 named storms and made it all of the way to the name “Iota.” Recently, the World Meteorological Organization (WMO) retired the use of Greek-letter names. That season renewed questions about whether climate change fueled the season.

The NOAA Geophysical Fluid Dynamics Lab website has always been my source for current and balanced thinking on climate change and tropical cyclones. This site has articulated for years that consensus thinking among scientists who actually study climate-hurricane connections is that “greenhouse warming will cause hurricanes in the coming century to be more intense globally and have higher rainfall rates than present-day hurricanes.” A 2019 study in Nature also found evidence that intensification rates in tropical cyclones could not be explained by natural variations alone. In recent years, storms like Hurricane Michael (2018), Laura (2020), and Delta (2020) have revealed the nightmare of rapid intensification (wind speed increasing roughly 35 mph over a 24-hour period) on communities.

It is clear from the recent study and those of the past that intensity will respond. The literature is less firm on frequency. For this reason, I implore the media, public, and policymakers to not say things like, “there are going to more hurricanes because of climate change.” One thing the new review study reveals is that sea level rise and flooding will also be a increasingly problematic now and going forward. Maya Chung is a doctoral candidate in Princeton’s Program in Atmospheric and Oceanic Sciences. She said, “The combination of likely increased storm intensity and rainfall rates and continued sea-level rise will act to increase the inundation risk of low-lying, unprotected regions.”

Thomas Knutson is a Division Leader at NOAA’s Geophysical Fluid Dynamics Laboratory and has studied hurricane-climate interactions for decades. He said, “It is possible that in the real world, hurricane activity will increase more than suggested by the range of existing studies — or perhaps less.” We are living in an unprecedented time for climate and modern society. Knutson went on to say, “Unfortunately, humans are on a path to find out through actually increasing global temperatures beyond levels experienced during human history, and then we will see how things turn out.”

While we wait, it is important that our infrastructure, emergency preparedness community, and healthcare system gets ready too.