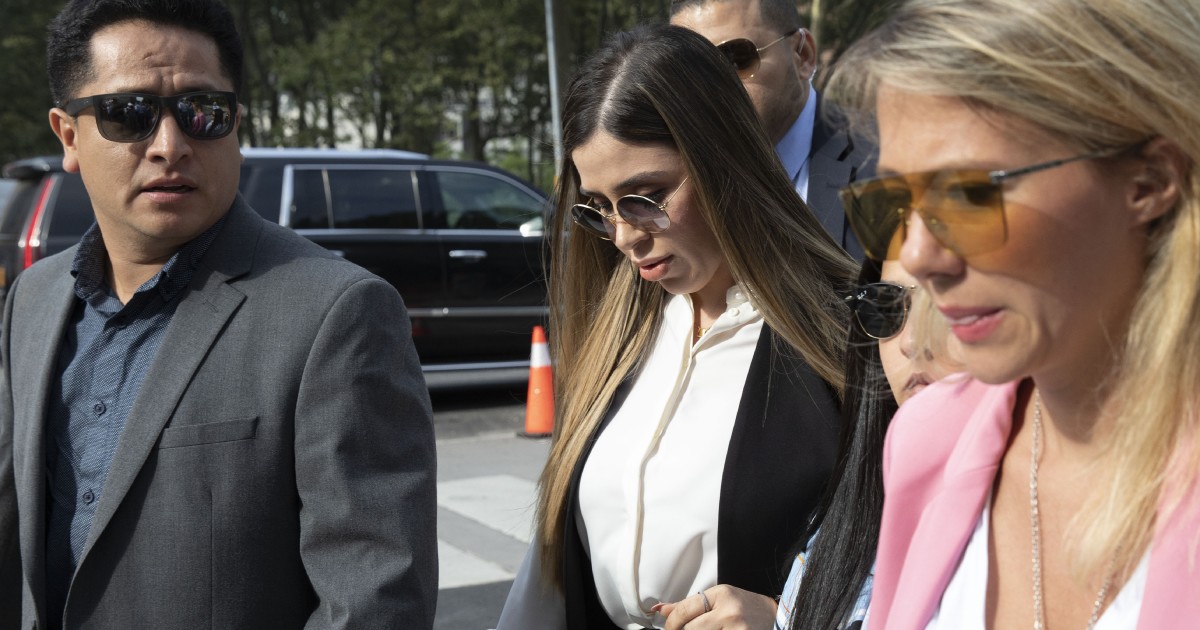 The Mexican drug kingpin known as El Chapo — “Shorty” — is said to have first met the elegant teenage daughter of one of his lieutenants at a small-town dance. Smitten, he later hosted a lavish bash to support her bid to become a beauty contest queen.

She was just 18 — and more than three decades his junior — when they married in 2007 in the town of La Angostura, deep in the Sierra Madre and in the heart of the so-called Golden Triangle of heroin production in Mexico.

Years later, decked out in designer garb and spiked heels, she was a paparazzi-pleasing daily presence as Joaquin “El Chapo” Guzman faced his legal reckoning in U.S. District Court in Brooklyn as the leader of the Sinaloa cartel.

On Monday, U.S. authorities arrested Emma Coronel Aispuro at Dulles International Airport in Virginia, alleging that she was more than the loyal and fashion-conscious wife of the world’s most notorious narco.

Mirroring some of the allegations that felled her husband, Coronel — a citizen of both the U.S. and Mexico — faces charges of participating in a broad conspiracy to distribute cocaine, methamphetamine, heroin and marijuana into the United States.

After Guzman was imprisoned in Mexico, an FBI affidavit states, his wife acted as a “go-between and messenger,” relaying his orders to his lieutenants and his four sons, all of whom are allegedly high-ranking cartel members.

U.S. authorities allege she assisted in his sensational 2015 prison escape, when Guzmán dropped into a hole scooped out beneath the shower in his Mexican cell and hopped onto a rail-mounted motorcycle, which whisked him to freedom through a mile-long tunnel.

RELATED:  Wajid Khan’s wife Kamalrukh says he threatened to divorce her in 2014, was living separately: ‘Last few days of his life were very sad’
RELATED:  Sana Khan's husband Anas Saiyad shares unseen wedding pic, says ‘most beautiful wife is one who brings you closer to paradise’

Coronel allegedly met with Guzmán’s son to discuss the plan, which had involved purchasing land and a warehouse near the prison, along with firearms and an armored truck, according to an FBI affidavit.

The FBI said his wife later helped organize a second escape scheme for which a Guzmán confederate received about $1 million — and told a “cooperating witness” that a senior prison official had been paid $2 million to help. The prison chief was not identified.

But that plan never came to fruition. Guzmán was extradited to the United States in January 2017.

A U.S. District judge in New York sentenced Guzmán to life in prison in July 2019 after a jury found him guilty of drug-trafficking, money laundering and conspiracy to commit murder.

Prosecutors also sought an order demanding Guzman turn over more than $12.6 billion in assets — their approximation of his drug earnings over the decades. His lawyers called the request preposterous and said he didn’t have anything close to that.

With her husband n U.S. custody, Coronel has been a frequent poster on Instagram and occasional visitor to the United States.

In September 2018, as Guzmán and his lawyers prepared for trial in New York, photos showed up on Instagram detailing a birthday party that Coronel threw for the couple’s twin daughters, who were born in 2011 at Antelope Valley Hospital in Lancaster.

The decadent bash featured carnival rides, hundreds of pink balloons and a set featuring gold chandeliers and a rose-hued throne.

Coronel wore 4-inch heels and posed in front of a fake pink mansion and a long table covered with flowers, desserts and a towering birthday cake.

The next year, as Guzmán, 64, awaited sentencing, Coronel said on Instagram that she was launching a fashion line inspired by her husband’s style. His image — square jaw, beady eyes, black mustache — is emblazoned on ball caps, T-shirts and posters in Mexico, especially in his home state of Sinaloa, where many regard him as a hero and Robin Hood figure who helped the poor.

In court, Coronel was equal parts spectacle and enigma. She spent almost every day of her husband’s trial in the second row of the gallery, silent but impossible to miss.

By opening statements, the pair had not had any direct contact in two years. Still, her petition to be allowed to hug him once before the trial began was denied.

Guzmán would search for her from the moment he was led into the courtroom each day. The couple often waved and flirted, sometimes to the consternation of U.S. District Judge Brian Cogan.

When she brought their twins to court, Guzmán couldn’t tear his eyes from them. Coronel often fussed to her husband’s lawyers about his ties, his expression, his health.

Although she rarely spoke to the press, she never shied from the cameras outside of court. Her chic outfits — designer jeans, sky-high stilettos, military blazers and velvet body suits — got plenty of attention, and she was fastidious about her makeup. But suspicion hung over her.

Her uncle, Ignacio Coronel — the so-called King of Crystal for his part in the smuggling of methamphetamines to the United States — was killed in a 2010 shootout with the Mexican military. He was said to be number three in the Sinaloa cartel hierarchy. Authorities allege that Coronel’s father, who is currently imprisoned in Mexico, “coordinated narcotics transports” for the Sinaloa cartel.

During the trial, many speculated she was more involved in her husband’s business dealings than she let on. She was obliged to pass through the metal detector twice before a sensitive witness was brought in to testify, out of concern she might smuggle in a cellphone to take his picture.

As the weeks dragged on, it was impossible for Coronel to conceal her boredom. She fidgeted in her seat and played with her long hair, and was scolded for using her lawyer’s phone in the courtroom.

Her arrest reverberated across social media, especially in Mexico, where many suggested tongue-in-cheek that Mexican President Andrés Manuel López Obrador would help get her returned to Mexico — as he did in the case of a former Mexican defense chief arrested in Los Angeles last year for alleged drug trafficking.

“Don’t worry Emma,” wrote ex-President Vicente Fox on Twitter. “The president will come to the rescue!!”

Two killed after spat over traffic in Kanpur, four arrested

Two persons were killed after a traffic argument in Kanpur on Friday...
Read more

Yella Beezy, the rapper, found himself in trouble with the authorities this...
Read more

New Delhi: A 21-year-old climate activist has been arrested from Bengaluru for...
Read more

PSL 2021, Match 10: Peshawar Zalmi vs Islamabad United – When and Where to Watch, Live Streaming Details