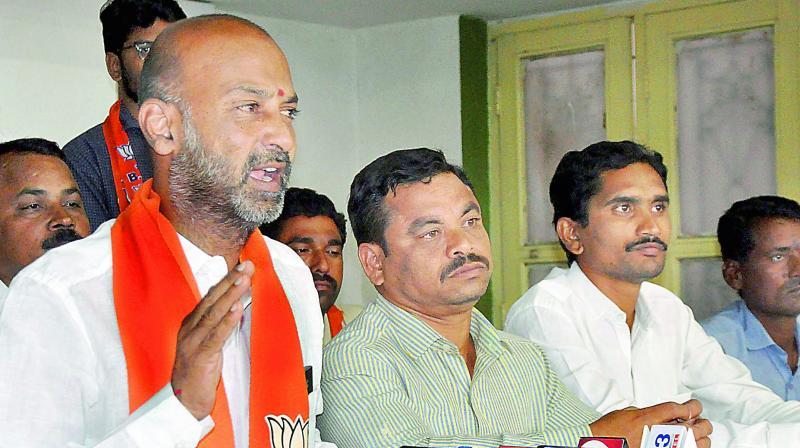 Bandi countered the comment, saying that if MIM demolishes the two memorials, he would demolish the MIM office, Darussalam, within two hours. He was participating in several road shows across the city including at Fathenagar, Balkampet and other divisions.

He reassured people saying he will pay floral tributes to both PV Narasimha Rao and NT Rama Rao, adding that he was capable of protecting memorials.

He criticised the TRS for claiming it was a ‘gully party’, saying it was a ‘gadila’ (donkey’s) party. He responded to comments of minister K.T. Rama about BJP being a Delhi party, saying the BJP was in power in more than 15 states in the country because it is a people’s party.

Bandi said that every rupee spent on development works taking place in Telangana was given by the Centre. He claimed that all roads, lights, drains, water supply, rice, community halls and burial gardens funds were being sanctioned from Central funds.

He accused Chief Minister K. Chandrasekhar Rao for lying and claiming it was state government funds that enabled development but it was funds released by Prime Minister Narendra Modi’s government fund. Yet, the CM did not place a photo of Modi ji in any of these programs, he said.

Sanjay Bandi announced that BJP will break the hold of gadilu (donkeys) of TRS and host the BJP flag on GHMC office soon. He said that people of Hyderabad have voted for BJP and the Dubbaka verdict will repeat in the state capital.

The BJP government has given funds of Rs 3,500 crore to build two lakh double-bedroom houses in the state, including 1.40 lakh houses for Hyderabad, but Chandrashekar Rao did not build the houses for the poor.

RELATED:  Sounding a Bit Like a Dictator There, Joe Biden