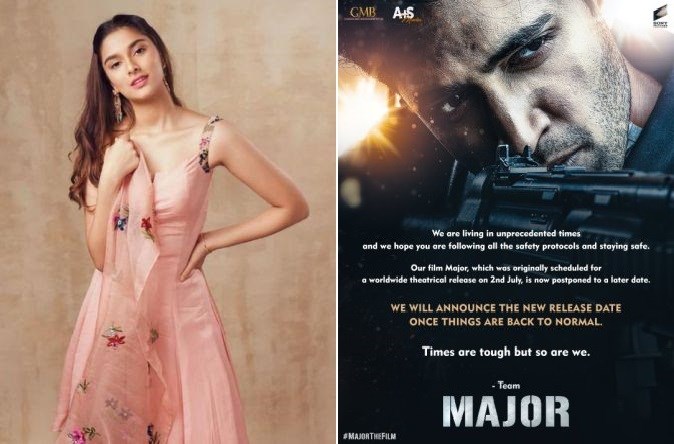 Diva Saiee Manjrekar starrer ‘Major’ based on the heroics of Major Sandeep Unnikrishnan, has been postponed due to second wave. The film was scheduled for 2nd July release but it’s been postponed indefinitely.

Due to corona induced lockdown and second wave wreaking havoc, the makers of Major film has decided to postpone the film, wait for better times.

In a statement, the makers of ‘Major’ officially shared, “We are living in unprecedented times and we hope you all are following all the safety protocols and staying safe. Our film Major, which was originally scheduled for a worldwide theatrical release on 2nd July, is now postponed to a later date. We will announce the new release date once things are back to normal. Times are tough but so are we. – Team Major”.

The teaser of Major’ was released recently, which traced the different dimensions of Sandeep Unnikrishnan’s life, from his childhood to teenage and his glorious years in the army.
Directed by Sashi Kiran Tikka, the film also stars Adivi Sesh and Sobhita Dhulipala in a leading role.

Will Release Major When Times Get Better Says Saiee Manjrekar

X
Huma Qureshi shares two of her characters close to her heart…CelebrityHuma Qureshi is on a roll these days! Her Hollywood film 'Army of the dead' has just released on Netflix and her show 'Maharani' is all set to premier…
close