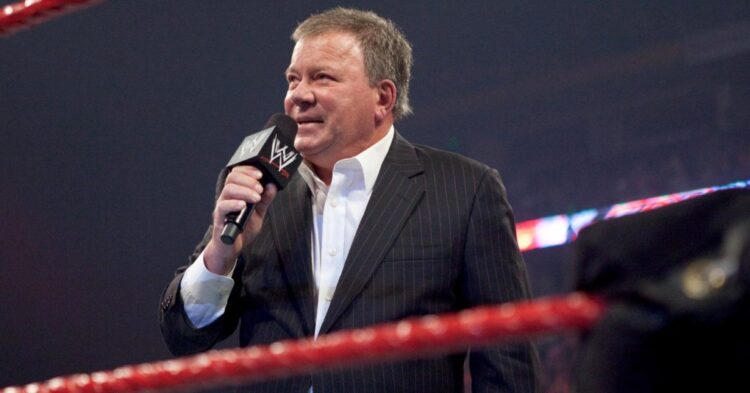 The often mentioned but never physically present WWE Hall of Fame is quite the mysterious entity.  While it’s a nice idea that wrestlers from WWE and all the companies they have absorbed have a way to be honored in a classy black-tie event, its inductees are filed into one of two categories: they’re on the good side of WWE Chairman/supervillain Vince McMahon, or they’re a celebrity that the company wants to rub elbows with.  And it is that “celebrity wing” of the WWE Hall of Fame that seems to be the most controversial part of the whole venture with fans.  This brings us to today’s official announcement from WWE that Star Trek legend William Shatner will be inducted into the WWE Hall of Fame next week.

So, upon hearing this news today, I had to do some research to see when Shatner had actually appeared on WWE programming.  Surprisingly enough, the captain of the Starship Enterprise has actually appeared on WWE a whopping four times!  He appeared twice in 1995 (you know, the undisputed worst year in wrestling history) and was involved in the feud between fellow Hall of Famers Bret “Hitman” Hart and Jerry “The King” Lawler.  He next appeared at the 2007 Hall of Fame ceremony to induct his old nemesis Khan, I mean Jerry Lawler, into the Hall.  His most recent appearance was where he hosted an episode of Raw in 2010 during the much-despised weekly guest host era.

BREAKING: As first reported by @USATODAY, @WilliamShatner is being inducted into the #WWEHOF as a member of the Class of 2020 during the 2021 WWE Hall of Fame Induction Ceremony! https://t.co/Cq1KrhIrKJ

So as he still chases that elusive Oscar, Shatner will for now have to settle for the WWE’s greatest honor for past their prime celebrities.  He will now join the pantheon of greatness that includes disgraced baseball legends (Pete Rose), stars of Batman & Robin (Arnold Schwarzenegger), fans/relatives of WWE stars (Snoop Dogg), fans/white trash (Kid Rock), and the world’s greatest Lex Luthor-impersonator (Donald Trump).

Congratulations to William Shatner on what we’re sure is a career highlight!