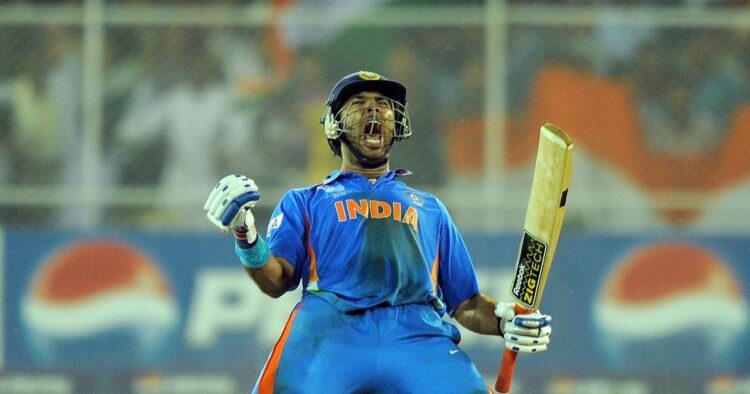 Yuvraj Singh, former Indian all-rounder opened up on the then skipper MS Dhoni’s match-winning six against Sri Lanka in the 2011 World Cup finale — a decade after India’s 2nd World Cup triumph in Mumbai.

Former India all-rounder Yuvraj Singh reflected on MS Dhoni’s winning six in the 2011 World Cup final against Sri Lanka, saying it was indeed a job well done. MS Dhoni’s iconic six-off Nuwan Kulasekara in the 49th over to seal the victory for India is forever etched in the memory of every Indian cricket fan.

MS Dhoni came ahead of Yuvraj Singh to counter the spin of Muttiah Muralitharan and the move paid rich dividends as well. Gautam Gambhir had laid a solid foundation but missed century by a whisker before the skipper took the game away from the Lankans. Yuvraj Singh himself played a crucial role in the second innings as well, scoring 21 off 24 balls, stitching a crucial unbroken 54-run stand with skipper which eventually got India over the finish line.

Batting first, Sri Lanka scored 274/6 with Mahela Jayawardene scoring an unbeaten 103 off 88 balls. Zaheer Khan and Yuvraj Singh took 2 wickets apiece. Gautam Gambhir then scored 97 off 122 balls and MS Dhoni scored an unbeaten 91 off only 79 balls to see India cross the hurdle in the 49th over winning by 6 wickets.

Yuvraj Singh was at his best in the 2011 World Cup. He finished with 362 runs, 15 wickets, 4 man-of-the-match awards, and the Player of the Tournament as Yuvraj Singh would forever be remembered for his scintillating performance in India’s second World Cup triumph at home after a hiatus of 28 years.

“God has indeed been very kind to me. I’ve been part of two World Cup triumphs and each one gives me an added reason to feel good about contributing to the team,” Yuvraj told the Hindu.

“In 2007 (in the inaugural T20 World Cup), those six sixes in an over brought a different kind of joy to the people, especially the young cricket fans. I still get lots of people coming to me and recalling how it was for them to watch the ball sail over the boundary, ball after ball.”

“Again in 2011, I think I could play a hand in most of the games. When I did not contribute with the bat, like against Pakistan (in the semifinals), I took two top-order wickets (Asad Shafiq and Younis Khan) and again two against Lanka, including Sangakkara’s.”

“Winning matters but winning in style matters a little more. That’s the difference between taking a winning single and sending the ball into the stands. It was indeed a job done well!”

Gautam Gambhir, Yuvraj Singh and MS Dhoni also featured in the inaugural T20I World Cup in 2007 which India won with several youngsters in the squad.