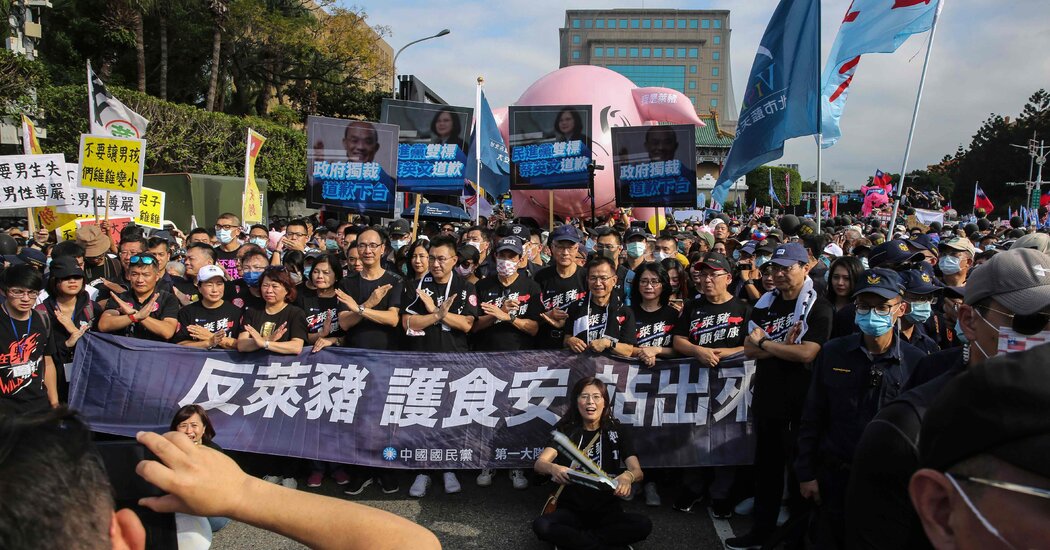 TAIPEI, Taiwan — Taiwan’s main opposition party, once a widely feared political force, now parades through the streets in a pink pickup truck decked out with pig’s ears and a snout. It brings life-size pig models to rallies. On the floor of the island’s legislature, its members recently flung pig intestines at rival lawmakers.

The garishly porcine displays by the party, the Kuomintang, are meant to highlight one of its pet issues, the importation of American pork containing a controversial additive. But in the eyes of critics, the antics signal the identity crisis that the party, once Asia’s wealthiest, now faces.

Many see it as out of touch with modern Taiwanese life. Even worse, they see its traditional emphasis on smooth relations with mainland China as dangerously outdated, as the Communist Party under Xi Jinping takes a harder line against the island that Beijing claims as its own.

The Kuomintang has suffered lopsided electoral defeats at the hands of voters like Chen Yu-chieh, a 27-year-old website designer. “The Kuomintang’s mind-set is more conservative,” Ms. Chen said. “I don’t think I’ll vote for the Kuomintang in the next few years, unless they make drastic changes.”

Party leaders have acknowledged the problem and vowed an overhaul. They have espoused democratic values and human rights, promised to recruit younger members and better engage the public, and sought to distance the party from Beijing.

“The Kuomintang needs to keep up with the times and needs to modernize,” said Johnny Chiang, who was elected as the party’s leader last March after pledging to rejuvenate it, in an interview in Taipei. At 48 years old, Mr. Chiang is one of the youngest leaders in the party’s history.

Whether the party succeeds could have profound implications for the future of Taiwan, as well as for Beijing and Washington.

Founded in 1894, the Kuomintang governed China for years before it was defeated by Mao’s Communists, and it fled to Taiwan, where it ruled with an iron fist and came down hard against anyone suspected of being a Communist. In recent decades, the party has emerged as a balancing force in the island’s delicate relationship with Beijing. Communist leaders until recently saw the Kuomintang as their preferred dialogue partner on the island, linked by their belief in a shared Chinese identity.

But the Kuomintang lost power in 2016 — for only the second time since direct presidential elections began in 1996 — as voters chose President Tsai Ing-wen, who is skeptical of closer ties with Beijing. The Kuomintang’s power has been eroding overall ever since.

In Washington, where attitudes have hardened against China’s Communist Party, Ms. Tsai has won strong support. In Beijing, the party is indicating that it is losing patience.

China’s leader, Xi Jinping, has yet to send a congratulatory letter to Mr. Chiang, the Kuomintang’s new leader, after his election. The snub was a break with a practice that had been customary since 2005, and it suggested to some observers that the Communist Party was wary of Mr. Chiang’s coolness toward Beijing.

Dialogue between the Communist Party and the Kuomintang has also slowed. In September, a Chinese state broadcaster mocked a planned visit to the mainland by a delegation from the Kuomintang as a “petition for peace,” painting the party as conciliatory. The Kuomintang canceled the visit.

The chill between the Kuomintang and the Communist Party could inject further instability into already tense ties between Taipei and Beijing. Beijing’s threats to forcibly bring the island back into its fold have escalated since President Tsai won re-election last year. Analysts in the mainland have warned that Beijing may resort to war if the Kuomintang is unable to reclaim power or if the Communist Party feels it no longer has a dialogue partner on the island.

The threat of war between the two sides has quickly become a flash point in relations between China and the United States. During the Trump administration, Washington drew Beijing’s anger by allowing high-profile visits and stepping up arms sales to Taiwan. The Biden administration has signaled its intent to continue showing support for the island, and Beijing has responded with fiery rhetoric and military activities.

In the longer term, the Kuomintang is at a crossroads. Looming over the party is the question of how it will navigate the issue of Taiwan’s sovereignty.

Most of the island’s 23 million people find the concept of unification with the mainland unappealing, and many are increasingly wary of Beijing’s intentions. The Kuomintang’s loss in last year’s presidential election was in part because its candidate had pushed to restore closer relations with the mainland.

Two months later, after Mr. Chiang was elected to lead the party, he sought to play down the importance of the so-called 1992 Consensus, an unwritten agreement that is the bedrock of ties between the Kuomintang and Beijing. That concept, in the view of the Kuomintang, holds that there is only one China, which includes Taiwan, but that each side may interpret it in its own way. But Mr. Chiang’s move quickly exposed a rift in the leadership as Kuomintang elders shot down his proposal, saying it would drastically hurt ties with Beijing.

Mr. Chiang now emphasizes that being a citizen of the Republic of China, as Taiwan is formally known, does not mean one may not also identify as being Taiwanese. Around two-thirds of Taiwanese — and 83 percent of Taiwanese between the ages of 18 and 29 — don’t identify as Chinese, according to a Pew Research survey released last year.

“We can’t deny where people are born,” Mr. Chiang said. “But just because you are ‘naturally Taiwanese’ doesn’t mean you necessarily have to be ‘naturally pro-independence.’”

To sell that message, the Kuomintang will need to win over its biggest skeptics: Taiwan’s youth.

Under Mr. Chiang, the Kuomintang in recent months has initiated a revamp. The party launched an online merchandise store and a new app, and it is ramping up its social media presence.

But it’s not clear whether the campaign will be enough to shift the popular perception of the party as a club of fusty, old-school elites.

On a recent morning in the southern city of Kaohsiung, around 50 college students gathered in a room at a lakeside resort for a three-day camp focused on recruiting younger members. Some participants were Kuomintang members and others had signed up to learn more about the party.

The students listened as a Kuomintang politician offered advice on social media strategy. “So you may have seen that on ‘IG’ there’s a marketing tool that’s pretty successful,” Lo Chih-chiang, the politician, said to the rapt audience, referring to Instagram. “You can write some great words on a photo and use that to tell a story.”

After the session, the students continued the conversation over a meal of sautéed vegetables, braised fish and yellow watermelon. Yang Tzung-fan, 24, a graduate student who joined the Kuomintang last year over the objections of her parents, said she was drawn to what she described as the party’s honest leadership as well as to their commitment to preserving Chinese culture.

Although many young Taiwanese, including some of the party’s supporters, are skeptical of unifying with China, Ms. Yang said that in her view, the prospect was not as scary as some made it out to be. “In a way, we are all one big family. There’s no need to distinguish from each other.”

But until the old guard of the Kuomintang agrees to move aside, Ms. Yang said, it will be difficult for the party to make any headway with the youth.

“They have to solve their internal problems, and then let young people participate in politics more,” she said. “They have to change the image that the Kuomintang is full of old male politicians.”