Home General With Trump Fading, Ukraine’s President Looks to a Reset With the U.S.

With Trump Fading, Ukraine’s President Looks to a Reset With the U.S. 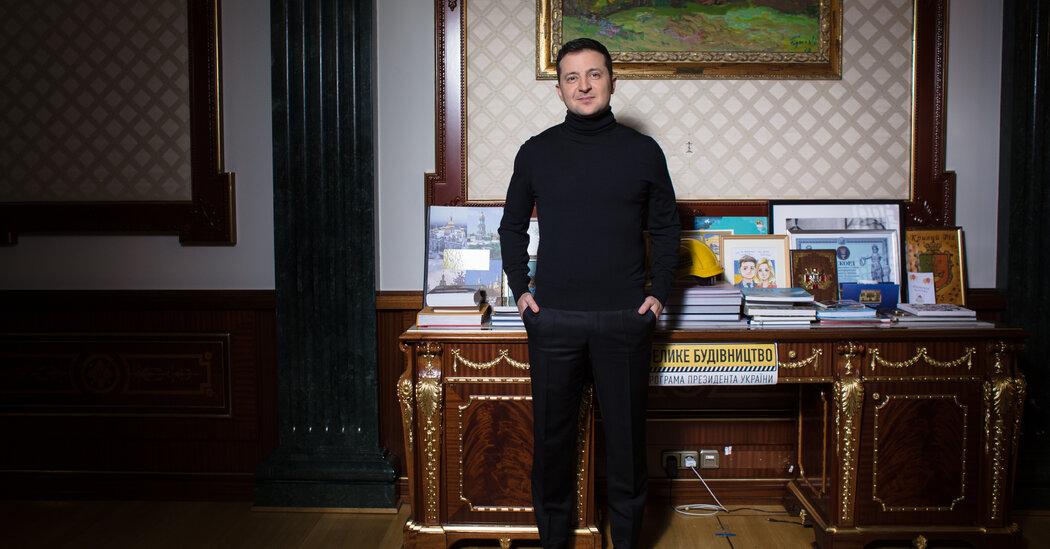 MOSCOW — Finally free of the shadow of President Trump, the president of Ukraine, Volodymyr Zelensky, is looking to put relations with the United States back on a sound footing with the incoming administration of President-elect Joseph R. Biden Jr.

“Joe Biden, it seems to me, knows Ukraine better than the previous president,” Mr. Zelensky said in his first interview with an American news organization since the election.

“Before his presidency, he had close ties to Ukraine, and he understands the Russians well, he understands the difference between Ukraine and Russia, and, it seems to me, he understands the Ukrainian mentality,” Mr. Zelensky said. “It will really help strengthen relations, help settle the war in Donbas and end the occupation of our territory. The United States can help.”

During the Obama years, Mr. Biden was put in charge of relations with Ukraine, where he worked with varying degrees of success to crack down on corruption and, after 2014, to end the war in Eastern Ukraine, an area referred to in Ukraine as the Donbas.

That background plus the business activities there of his son Hunter Biden drew the attention last year of Mr. Trump, who saw Mr. Biden as a potential rival for the presidency. Uncomfortably for Mr. Zelensky, that dynamic drew Ukraine into American politics just months after he was sworn in as a corruption-fighting president in May 2019.

“They roped us in,” said Mr. Zelensky, a former comedian turned politician, speaking more freely about the matter with Mr. Trump’s looming departure. “But I think we behaved with dignity suitable to a sovereign country.”

As he took office, Mr. Zelensky had hoped to gain diplomatic backup from the United States in negotiations to end the grinding war with Russian-led separatists in eastern Ukraine. But that strategy unraveled in the impeachment scandal last year.

After that, Mr. Zelensky largely refrained from public discussion of U.S. policy toward Ukraine, lest he offend one side or the other.

Freed now from those restraints, Mr. Zelensky is setting out again, more than a year after his ill-fated first effort, to win greater American engagement in ending the only active war in Europe today.

More than 13,000 people have died in the war in the flatlands of eastern Ukraine since Russia intervened militarily six years ago to support breakaway enclaves. These days the two armies fight sporadically along a 280-mile trench line, lobbing mortar and artillery fire at one another.

Like the Berlin Wall, this front line divides people by East-West politics, not ethnicity. Villages on both sides speak a mix of Ukrainian and Russian. The Ukrainian central government wants to integrate with the European Union, while Russia seeks to retain the country within a sphere of influence.

The negotiations to end the conflict are also geopolitical. France and Germany now mediate in so-called “Normandy format” talks. Mr. Zelensky has since early in his presidency sought a U.S. role in negotiations.

William B. Taylor Jr., a former United States ambassador to Kyiv who served as chief of mission last year during the events leading to Mr. Trump’s impeachment, said Mr. Zelensky is correct in thinking relations with America may turn a hopeful new corner. “Zelensky’s instincts are still good,” he said in a telephone interview.

“U.S.-Ukraine relations will become stronger and more coherent and that will benefit Zelensky,” Mr. Taylor said. “I am encouraged and optimistic about the new administration’s Ukraine policy.”

Mr. Zelensky, in the interview by video link from Kyiv, said he was grateful for American support during the Trump administration, including for the stiffening of sanctions against Russia. “I should thank the United States in the period of Donald Trump,” he said. But he allowed that more could be done, such as encouraging American investment in government-controlled areas near the conflict.

“We really don’t want to be running on a treadmill,” he said, referring to European-led negotiations that have dragged on inconclusively for six years. A cease-fire has diminished but not halted the violence.

The Trump administration has been largely absent from the process. The president fully promoted the baseless claim that Ukraine, rather than Russia, had meddled in the 2016 presidential election, and he thought Ukraine subtly favored Hillary Clinton.

In that toxic atmosphere, the nominal U.S. envoy to the settlement talks, Kurt Volker, found himself alongside Mr. Trump’s personal lawyer, Rudolph W. Giuliani, negotiating not on matters of war and peace but rather a request that Mr. Zelensky investigate Mr. Trump’s political opponent, Mr. Biden, and his family — leading ultimately to Mr. Trump’s infamous phone call asking Mr. Zelensky to “do us a favor” and hinting about withholding military aid if he didn’t.

As the impeachment saga unfolded, Mr. Zelensky walked a narrow path, declining to announce an investigation of the Bidens while helping Mr. Trump by cracking down on leaks that might have aided Democrats with impeachment.

Despite Mr. Zelensky’s efforts, the Trump administration ignored Ukraine after the impeachment, not bothering to appoint a new peace envoy or to push the confirmation of a new ambassador.

In the interview, Mr. Zelensky said he resented efforts to draw Ukraine into American politics, which could only be harmful to the country’s interests.

“I don’t want Ukraine to become the subject” of a fight between Democrats and Republicans, he said. “We are beautiful partners. But partners in what? Let’s be partners in geopolitics, in the economy between our countries. But certainly not between personalities, and moreover with two pretenders to the presidency of the United States.”

Mr. Biden is expected to encourage Mr. Zelensky to press ahead with his anticorruption agenda and to make a clean break with Ukraine’s shadowy business oligarchs, some of whom promulgate pro-Russian views on their television channels.

Mr. Zelensky has dragged his feet on this score. One oligarch who aided Mr. Zelensky in his campaign, Ihor Kolomoisky, cost Ukraine $5.6 billion in a bank bailout amid allegations of embezzlement, raising fears that Kyiv’s elite were siphoning off Western aid money. Mr. Kolomoisky denies wrongdoing.

Mr. Zelensky said he saw no need to demonstrate distance from Mr. Kolomoisky. “I’m not certain that I should show something” now, he said, as that would indicate his decisions had been influenced in the past, which he denied. A new law rules out oligarchic meddling in banking oversight in Ukraine, he said.

When the subject turned to coronavirus vaccines, Mr. Zelensky had trouble containing his frustration with Mr. Trump and his executive order banning the export of vaccines. Before the ban, Ukraine had been in talks with Pfizer, Moderna and Johnson & Johnson to speed up delivery but now has to settle for its first commercial vaccine shipments months later than expected because of Mr. Trump’s executive order.

Russia has gleefully seized on the U.S. export ban for propaganda purposes, floating the idea that Ukraine, with friends like these, might consider turning instead to Moscow for lifesaving vaccines — no matter that Russia is also backing the separatist war.

“Of course, it is impossible to explain to Ukrainian society why, when America and Europe are not giving you vaccines, you shouldn’t take vaccines from Russia,” Mr. Zelensky said. He was bracing, he said, for an “information war” on the issue.

Still, as the largest democracy in the former Soviet Union, he said, Ukraine remained a natural long-term partner for the United States.