Home News Workers Party of Korea | The party of Kims

Workers Party of Korea | The party of Kims 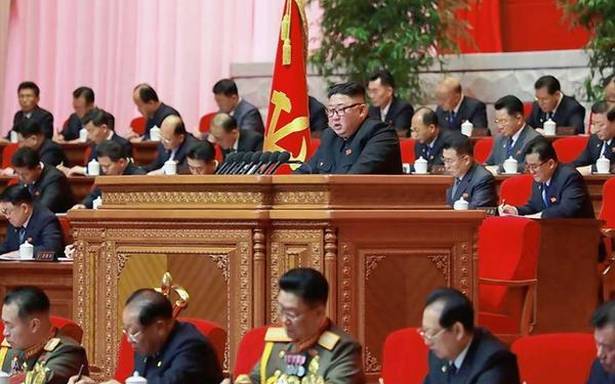 Nine years since being anointed as the Supreme Leader of the authoritarian Democratic People’s Republic of Korea (DPRK), Kim Jong-un has presided over the second party Congress of the ruling Workers Party of Korea (WPK) in his tenure. This was just the seventh Party Congress since the Workers Party took power in North Korea in 1948 and eighth overall. None were held between 1980 and 2016, a reflection of the nature of governance in this single party-ruled state, where the party exists merely as an extended entity of the personality cult that dominates government in the country. But even then, two party Congresses being held since Mr. Kim Jong-un came to power signifies a shift from the previous iteration of the Kim dynasty.

Nominally, an “independent socialist State”, North Korea is an authoritarian dictatorship led by the Kim dynasty with Mr. Kim Jong-un being the third ruler of the country, succeeding his father Kim Jong-il, who himself came to power after the death of his father and the country’s founding leader Kim Il-sung. Political dynasties running in the same family are not the preserve of dictatorships or monarchies alone, but North Korea is unique among self-proclaimed socialist countries in institutionalising it. The hegemony of the WPK is enshrined in its Constitution and Mr. Kim Jong-un as the Chairman of the WPK and the chairman of the State Affairs Commission of the DPRK is recognised as the “Supreme Leader” of the country.

Its governing “Ten principles for the establishment of a monolothic ideological system”, a set of rules that have superseded the Constitution in the government’s day-to-day functioning and which are supposed to be memorised by every citizen, include a Clause that the “party” and the “revolution” must be eternally carried forward by the “Baekdu bloodline” (shorthand for the Kim dynasty).

Little has changed in the political dynamics of the country that were set in stone in the later years of rule by Kim Il-Sung. The nominal ideology that governs the party and its rule in the country remains Juche (self-reliance) and Songun (military-first). Juche draws from the legacy of Kim Il-sung’s rule during which North Korea was a key member of the Socialist bloc and worked towards building its economy without tying into the world’s capitalist markets and since then morphed into North Korea’s pursuit of strategic autonomy by developing nuclear weapons to counter its key adversary, the U.S. Songun was a guiding principle enshrined during Kim Jong-il’s rule, when the regime emphasised military supremacy, partly to gain the support of the armed forces to prevent the possibility of a depoliticised military’s defection that could pre-empt a collapse of the socialist regime, similar to the fall of several such regimes at the end of the Cold War and partly to secure the legitimacy of Kim Jong-il, who lacked any military experience unlike his father.

Juche remains only on paper, as North Korea is a highly dependent nation on Chinese imports and aid, but there have been functional differences in the implementation of Songun since the demise of Kim Jong-il. The differences can also explain the conduction of the two Workers Party Congresses in the former’s tenure after the last such Congress before 2016 was held in 1980.

Apart from holding the Party Congress, the Kim Jong-un regime has given greater emphasis to policy-making process — convening meetings of the various leadership levels of the WPK. Even if these meetings are largely ceremonial and a means to convey policy decisions from the top leadership to the rank and file, the very fact that they are being more regularly convened suggests a functional difference from the previous regime led by Kim Jong-il, when even plenary sessions of the WPK’s Central Committee were not held. Songun is also never mentioned in Mr. Kim Jong-un’s speeches, signifying a definite shift from the key ideology of the Kim Jong-il regime, with importance accruing more to the party organisation as opposed to the military.

The WPK retains its role as an organisation that allows for the regime to conduct mass scale surveillance of its citizenry and to reward those who are favourable to it and therefore provides it the edge in retaining its authoritarian rule. The difference in emphasis on retaining control through the party rather than the military is also a consequence of the regime’s recognition of the unique problems of the impoverished nation.

Little is understood about the country’s economy except for what is gleaned from recent defectors, mostly those have fled the country because of poverty and satellite imagery. Recent scholarly work on North Korea using remote-sensed night luminosity data estimated high levels of poverty (of around 60%) besides divergent incomes across regions in the country.

Mr. Kim Jong-un’s regime seems to be cognisant about the possibility of threats to its regime because of this dire economic situation. In the last year, the COVID-19 global crisis has exacerbated its already fragile economy, which has been affected badly by natural disasters and the international sanctions imposed on it due to its nuclear and ballistic missile programmes.

In the Congress’ sessions so far, the regime seems to be harping on a self-critique of its economic efforts, in a way to reassure the regime’s adherents of a renewed focus on livelihoods even as it continued to emphasise its nuclear brinkmanship. Brinkmanship using nuclear and missile tests have helped the regime secure trade and aid benefits in the past besides shoring up its propaganda image as the protector of the state against a hostile enemy, the U.S. On that front, expectedly, there is continuity as a new regime led by Joe Biden comes to power in the U.S.

In sum, the dictatorship in North Korea persists with its anachronistic form of governance and control over a flailing economy even as it adopts different means to achieve continuity.