World Wildlife Day: Aankhen to Haathi Mere Saathi: 8 Films with an animal in a pivotal role 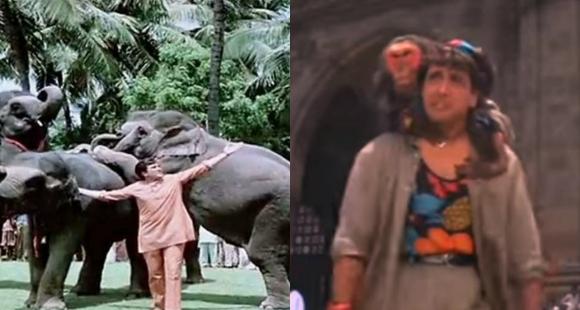 Actors are the ones who get the audience to cinema halls. They are considered to be the backbone of any film. However, at times the supporting characters overshadow the lead actor’s character as they have a big role to play. Supporting characters are equally important as lead characters. There have been several Bollywood films where an ‘animal’ played a supporting role and got more love than the lead actors. So whether it”s fighting the villains to save the lives of their mentor or as a cupid, the animals have done it all in the films.

Rajesh Khanna starrer Haathi Mere Saathi, Amitabh Bachchan starrer Coolie to Imran Khan starrer Katti Batti, there are many such Hindi films which featured an animal as a key character. In fact, dogs also played key roles in several films although they are not considered as ‘wild’. Now, here’s a list of 8 such films where an animal played an important role. Check out:

The Rajesh Khanna and Tanuja starrer film tell the story of an orphaned zookeeper forced to choose between his beloved pet elephant and his family. On the other hand, the elephant sacrifices his life to save his master and his wife’s relationship.

The David Dhawan-directed film had an important role of a monkey. However, the blockbuster film starred Govinda and Chunkey Panday in the lead roles. However, the third hero of the film, which was the monkey, had stolen all the attention.

Amitabh Bachchan’s pet eagle named Allah Rakha was as much a part of this blockbuster as the actor himself. The eagle even saved the actor from the villains in the film. Even the poster of the film features the bird sitting on Big B’s wrist.

Well, who doesn’t know Dhanno? “Chal Dhanno aaj tere Basanti ki izzat ka sawal hai…” the famous dialogue says it all. From Hema Malini’s introduction scene to her fist scenes with Dharmendra and Amitabh Bachchan, everything happened on the same cart carried by Dhaano, a horse. Just like Jai and Veeru, the camaraderie between Dhanno and Basanti will never be forgotten.

The film was entirely based on the relationship between a boy named Pi and a tiger, stranded on a boat in the ocean. The tiger was created by CGI to scare the audience. However, for a few scenes where CGI was not deemed suitable, reportedly a real Bengal Tiger was used.

In this film, a parrot and a dog were enough to steal the limelight from Hrithik Roshan and Kareena Kapoor Khan. Reportedly, the parrot was CGI generated.

In this romantic drama, we saw more love between Imran Khan and his pet turtle. The pet turtle of Imran had managed to grab a lot of love and appreciation.

Tuffy, the dog, played a crucial role in this iconic film. From umpiring cricket matches to delivering Nisha’s message to Rajesh instead of Prem, the dog did it all. The critics, as well as the cine lovers, loved the role of Tuffy in the film.