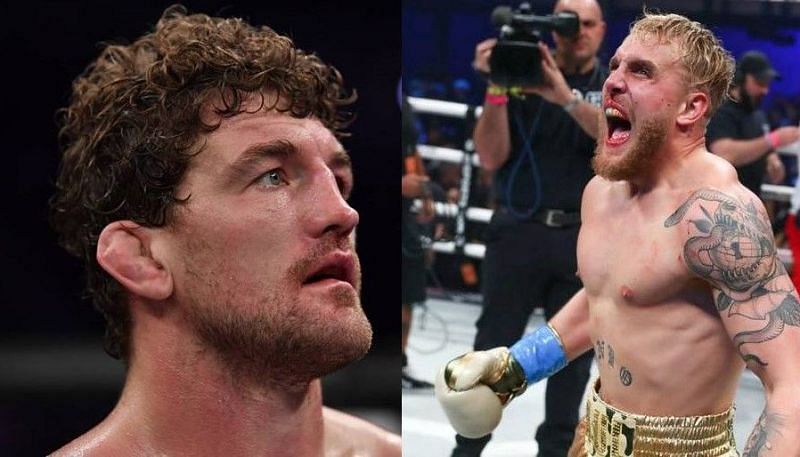 Ben Askren is a former Bellator and One Championship welterweight champion, and he’s widely regarded as one of the best grapplers to have ever competed in the sport of MMA. Askren is revered for his outstanding wrestling and excellent overall grappling skills.

Going by the moniker “Funky”, the talented MMA fighter has also competed in the UFC. Ben Askren retired from the sport of MMA after suffering consecutive losses to Jorge Masvidal and Demian Maia respectively. Askren’s last fight was a third-round submission loss to Maia in October 2019.

Ben Askren is now set to make his professional boxing debut against YouTube megastar and internet personality Jake Paul. On an edition of Ariel Helwani’s MMA Show, Ben Askren gave his prediction for his boxing match against Paul.

“TKO round seven,” Ben Askren said when asked for his official prediction for his fight against Jake Paul.

“Round seven! Wow, that late?”

Askren shared doubt over his power in response.

“Yeah, because I don’t have a huge amount of power. So, it’d take me some time to wear him down and make him hate his life. And then, you know, eventually, he’ll just say look, ‘I’m a rich celebrity. I don’t need to get f**king punched anymore. I’m just gonna roll over’.” (*H/T Sportskeeda for the transcription)

The professional boxing match between Ben Askren and Jake Paul is being promoted by the Triller Fight Club and will take place on April 17, 2021. The matchup is scheduled for eight rounds, with 10-ounce gloves, and will be contested around the weight of 185-190 pounds.

Furthermore, Ben Askren concurred with Helwani when the latter noted that Askren would work the jab, attack Jake Paul’s body, and then wear him down. Askren reiterated that he intends to grind out a win over Paul.

Jake Paul is 2-0 as a professional boxer, and this fight against Ben Askren is believed to be Paul’s first major test in his career as a combat sportsperson.

Meanwhile, certain sections of the combat sports community believe that Askren – who has often been criticized for being over-reliant on grappling and possessing rudimentary striking skills – might have made a mistake by accepting a boxing match against a young up-and-coming boxer like Jake Paul.