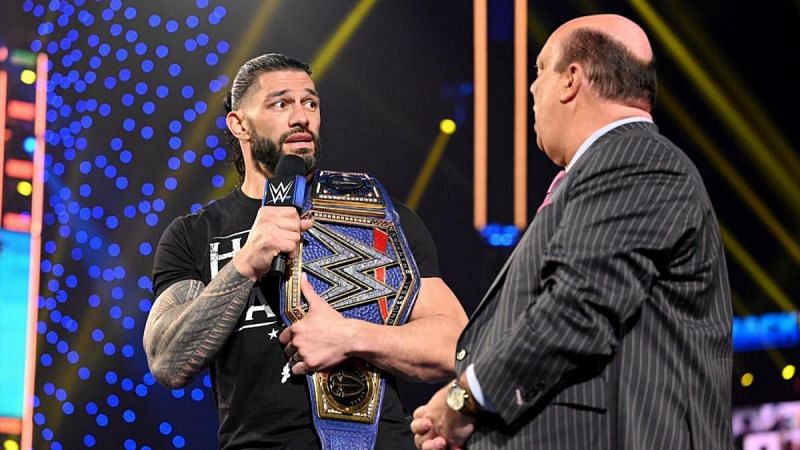 Roman Reigns recently shared his thoughts on how many people often compare the Royal Rumble and WrestleMania pay-per-views. Fans of professional wrestling have been engaging in this debate for some time now. Considering all the hype surrounding the Royal Rumble and its unique format, this event is often considered WWE’s biggest show. But Reigns named WrestleMania instead.

“The Head of the Table” Roman Reigns is the current WWE Universal Champion on SmackDown. Alongside his special counsel, Paul Heyman and his cousin, Jey Uso, Roman Reigns continues to be a dominant force on the blue brand.

Speaking to Nick Wright on The Herd, Roman Reigns answered a question regarding the comparisons that are made between the two shows. Wright stated that he has always looked at the Royal Rumble as a show that’s bigger than WrestleMania. In response, Reigns claimed that WrestleMania is the premiere event, though he acknowledged the Royal Rumble’s importance.

“I think from an annual standpoint, we provide so many things for our fans to be excited for, and it’s without question that WrestleMania is our biggest event. But when you do it 52 weeks out of the year, you have to continue to provide special events for your fans, and that’s what we do, the Royal Rumble is a great example of that.”

Roman Reigns is a superstar who has done it all, both at the Royal Rumble and at WrestleMania. “The Big Dog” will be going into this week’s pay-per-view looking to end his feud with Kevin Owens once and for all.

What is Roman Reigns doing at WWE Royal Rumble 2021?

Roman Reigns has always been one the most dominant performers in the marquee matchup of the Royal Rumble. But this year, “The Tribal Chief” will be entering the event as the WWE Universal Champion. He will be defending his title against Kevin Owens, a man he has been unable to get rid of for two months now.

Reigns defeated Owens at WWE TLC and the subsequent episode of WWE SmackDown. In both cases, Jey Uso played a crucial role in the outcome of the match. Owens should be prepared for him this time around, but Reigns might have more tricks up his sleeve.

Roman Reigns seems like he’s unstoppable right now, and many fans expect him to return on Sunday. But if WWE has taught the fans one thing, it’s that anything is possible. Who do you think will emerge victorious in this match? Sound off in the comments below.