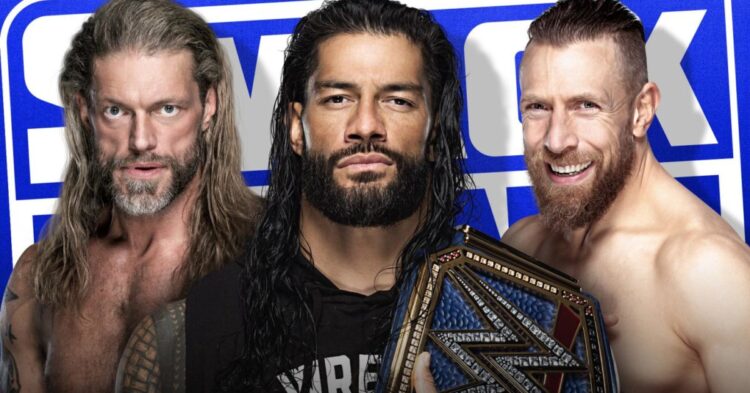 This week’s Smackdown hasn’t even aired yet, and WWE is already planning what they’re going to do next week? Who are you, and what have you done with Vince McMahon, pal?! According to WWE, April 9th will be a special WrestleMania Edition of Smackdown on Fox, and they’ve already booked some major segments. First of all, Roman Reigns, Daniel Bryan, and Edge will “address the WWE Universe” ahead of their title match at WrestleMania, and that’s surely going to end in violence. The Smackdown Tag Team Championships will be defended in a fatal four-way. And the Andre the Giant Battle Royal will take place on Smackdown as well. So basically Smackdown will become the WrestleMania pre-show, which begs the question: what the heck will be on the actual WrestleMania pre-shows?

Get ready for a hundred straight hours of wrestling next week and check out the press release from WWE.com:

As first announced on Twitter Spaces, the final stop on The Road to WrestleMania will feature a Special WrestleMania Edition of SmackDown next Friday on FOX!

Universal Champion Roman Reigns, Daniel Bryan and Edge to address the WWE Universe
Two days before they square off in the highly-anticipated Universal Championship Triple Threat Match, the WWE Universe will hear from The Head of the Table, The Leader of the “Yes!” Movement and The Ultimate Opportunist as they prepare to collide on The Grandest Stage of Them All?

WWE Official Adam Pearce announced the combatants for the prestigious free-for-all will include:

Don’t miss all the action of the Special WrestleMania Edition of SmackDown, next Friday, April 9, beginning at 8/7 C on FOX! And make sure to tune into WrestleMania April 10 and 11 streaming LIVE on Peacock!