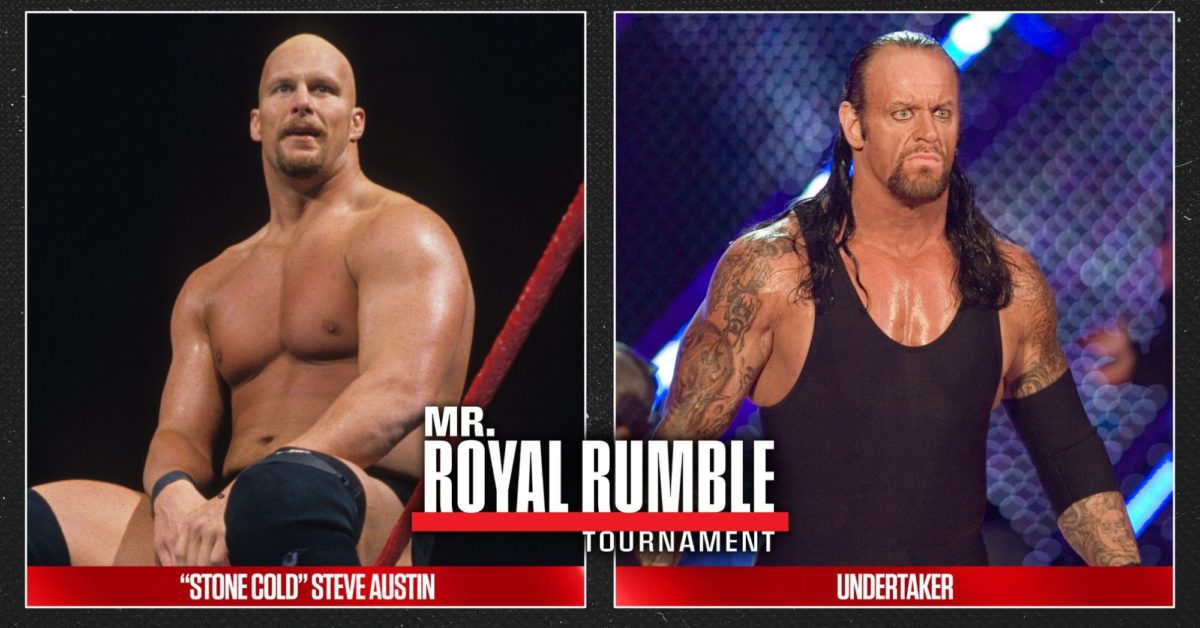 Pro wrestling and nicknames have always gone hand-in-hand and fans are always well versed in these pseudonyms.  Ask them “Who is Mr. WrestleMania?”  They will answer Shawn Michaels instinctually.  “Who is Mr. Monday Night?”  Rob Van Dam, of course.  But now, WWE is asking fans “Who is Mr. Royal Rumble?”  And while some may think that there are a couple of obvious choices that immediately come to mind as that title-holder, it turns out the fans who voted might not see it as a clear-cut objective answer.

Since January 19, the WWE Network social media accounts have had fans vote for who should be crowned Mr. Royal Rumble by viewing the head-to-head matchups on their stories and selecting who should move on in their bracket of pre-selected choices.  The bracket started with 16 names from every era the now 33-year-old annual event has covered and as of today, the fans have voted those names down to two:  Stone Cold Steve Austin and The Undertaker.  The winner of the Mr. Royal Rumble title will be revealed on Sunday, January 31 (the date of the 33rd annual event).

So, did fans get it right with the final two choices?  Yes and no.  Stone Cold Steve Austin is an obvious choice, seeing as the Texas Rattlesnake has won a record 3 Royal Rumble events, including two straight wins in 1997 and 1998 and a second-place finish in 1999.  In the 6 Rumbles Austin entered over his WWE career, he has 36 total eliminations, including 10 in 1997, which is tied with Hulk Hogan‘s 1989 effort for the fifth-most ever for a single Rumble event.

And how do the Undertaker’s Royal Rumble stats measure up to ol’ Stone Cold’s?  Honestly, not so great.  Since his first Rumble appearance in 1991, Taker has entered the match 9 times and has only won it once in 2007.  And his entry number in that event?  Number 30.  Now to be fair, The Deadman has taken 40 souls in the Rumble over the years (tied with Shawn Michaels for second-most ever), but he hasn’t exactly been a Rumble mainstay, even going 7 years at one point between the 1993 match and the 2001 match without an entry.  Now, this isn’t a knock at the Undertaker or his legacy in any way.  He is one of the greatest to ever step into the squared circle and his face should be on the WWE Mount Rushmore, which I’m sure is well into production along with the physical Hall of Fame.  But one of the top two Royal Rumble competitors ever?  I don’t think so.

So who then belongs in the conversation with Stone Cold Steve Austin as Mr. Royal Rumble?  Let’s look at some names I’d throw out there.

Kane: The Greatest and Most Unfortunate Royal Rumble Competitor?

Kane is both arguably the greatest Royal Rumble competitor ever and the most unfortunate ever.  Why? Well, aside from appearing in the most Rumble matches ever at 19, The Big Red Machine has also had the most total eliminations ever at 44.  Those are some pretty awe-inspiring numbers, but alas this tragic character also has a tragic Rumble record, as he has never actually won the match.  Still, those numbers are incredible and instantly bring the Mayor of Knox County, TN into the conversation.

Hunter Hearst Helmsley has won the Royal Rumble match twice, tied for second-most ever.  He’s also been runner-up twice and has the third most cumulative time spent in the match, as in the 9 times he’s entered, he’s spent over 4 hours in the ring.  Over the years he’s racked up a total of 32 eliminations, good for sixth on the all-time list.  It’s also worth noting that The King of Kings is not retired yet and might just add to these numbers and rise up the record lists.  Game on.

Could Mr. WrestleMania also be Mr. Royal Rumble?  The argument is definitely there.  Since his first Rumble in the second-ever event in 1989, the Heartbreak Kid has won the match in 1995 and 1996, and in his first victory, he was the first-ever winner to enter at number 1.  In the 12 Royal Rumbles he’s competed in, HBK has 40 total eliminations, which comes in at second-most all time and he has spent a cumulative 3 hours and 47 minutes in the match, which is the fourth most time ever.  And if it counts, the Showstopper did just that when in 1995 he gave us arguably the greatest Rumble visual of all time when he was thrown over the top rope by runner up the British Bulldog, but managed to hang on with one hand and narrowly avoid touching both feet to the outside floor, propelling himself back into the ring to toss out Davey Boy Smith and win the match.

Roman Reigns: Is The Big Dog On His Way To Being The Greatest Rumble Entrant Ever?

Yes, I can hear it all now.  “Roman Reigns is too recent!”  “Roman is this and that!”  I hear you.  But here’s the thing; stats don’t care about your opinion.  In only 6 Royal Rumble appearances so far, The Big Dog has won the 2015 match, been runner up 4 times (!!!!), has the second most eliminations in a single match at 12 in 2014, and has eliminated 32 competitors thus far in his still-young career.  Love him or not, Roman will probably win more Rumble matches and will almost definitely climb way up the total eliminations list.

So we will soon know whom the fans have chosen as Mr. Royal Rumble, at least when deciding between Stone Cold Steve Austin and The Undertaker.  But while Austin’s credentials for the title are quite formidable, The Undertaker’s entry in the finals here might be more a result of fan adoration than based on actual results throughout the Rumble‘s 30+ year history.  And that’s understandable, considering that not only is Taker a WWE all-time legend whose popularity and visibility is at an all-time high due to his recent retirement and media tour.  But hopefully, when viewing the Rumble‘s history with stats in mind over popularity, we can see that there are some names that could always be substituted with Mr. Royal Rumble.