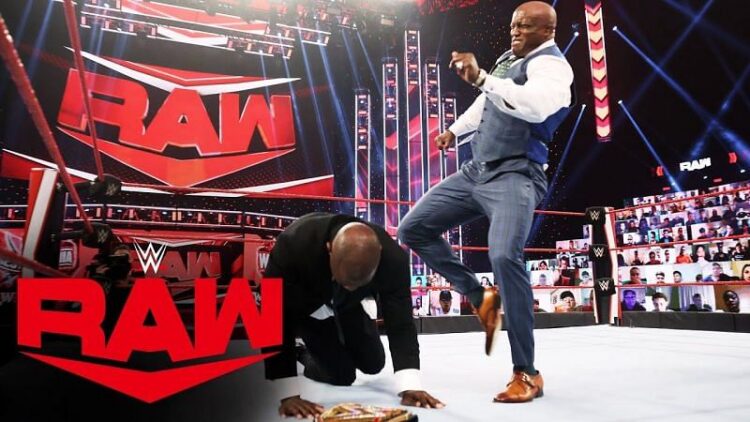 The Hurt Business broke up on WWE RAW last night, and the WWE Universe isn’t happy about it.

According to Showbuzz Daily, this week’s edition of WWE RAW brought in 1.701 million viewers, way down from last week’s 1.816 million. It can’t be what Vince McMahon wanted to see two weeks before WrestleMania.

WWE RAW continued to suffer the trend of not hitting the two million viewer range in any hour of the show, seeing the usual trend of losing viewers throughout the evening.

WWE started the show with 1.733 million. It dropped to 1.697 million in hour two and bottomed out to 1.673 million by the end of the evening. It’s evident that the WWE Universe didn’t enjoy this week’s RAW episode, and the break up of The Hurt Business at the top of the show didn’t help.

In the all-important 18-49 demo, WWE RAW stayed even from last week with a 0.56. While it lost viewership, it maintained the demo, and that seems to be all people care about lately, so that’s a win for WWE.

In more positive news from the demo, the 18-49 demo increased every hour of WWE RAW last night. It started with 0.53 in hour one, rose to 0.56 in hour number two, and rose again to 0.58 in hour number three. With the demo numbers being even from last week, this is probably the bright spot WWE will take away from last night’s show.

Last week, WWE took the fourth, fifth, and sixth spots on cable for Monday, which was a lot lower than it has been doing lately. This week, WWE RAW once again took the top three spots on cable. Whether you loved or hated the show last night, you can’t argue against these numbers.

WWE RAW kicked off last night with the breakup of The Hurt Business. It was a very puzzling move to break up arguably the best faction WWE has put together in years two weeks before WrestleMania.

The show closed last night with Drew McIntyre defeating Ricochet and Mustafa Ali in back-to-back matches before being attacked by Bobby Lashley and King Corbin.

What did you think of WWE RAW last night? What was your favorite match or segment? Let us know by sounding off in the comments section below.