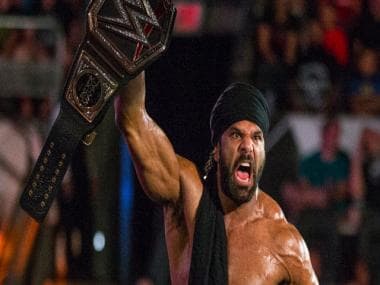 And after hitting another major roadblock in his career, this time in the form of a knee surgery that has put him out of action for well more than a year, Mahal prepares for another comeback into the company.

“You’re going to see a new version — and I would say the best version of the Modern Day Maharaja.”

Jinder Mahal’s had quite the story in the World Wrestling Entertainment (WWE). From the days of trying to get a foothold in the industry while working alongside the Great Khali and being part of the 3MB, getting released of his services by the company in 2014, competing in the independent circuit for a while to making a successful comeback by becoming the first WWE Champion of Indian origin.

And after hitting another major roadblock in his career, this time in the form of a knee surgery that has put him out of action for well more than a year, Mahal prepares for another comeback into the locker room.

Older, wiser, and certainly knowing what it takes to chart one’s way back to the top, the ‘Modern Day Maharaja’ has announced he’s going to be better than ever when he returns to the squared circle on 26 January at the ‘Superstar Spectacle’, a special two-hour event by WWE on Republic Day featuring a host of superstars from all three brands, including several Indians — both the established names as well as the new recruits.

“Obviously it’s going to be the hashtag #ReturnOfTheMaharaja — I’m going to be coming back from injury, so looking to make an impact and establish myself again in the title scene.

“I’m still inspired, just like before, even more motivated than ever before. I want to have a long career in WWE and now that I’m realising that I’m getting a little bit older, I’m 34 years old, I just have to take care of myself a little bit more. So now I’m doing more yoga, more recovery stuff, just staying on top of the recovery aspect,” says Mahal in an interaction with Firstpost ahead of the Republic Day special.

Mahal has had to spend an extended period of time on the sidelines since suffering a ruptured patellar tendon at a live event in Denver on 15 June, 2019. He made a short-lived return on Raw in April last year, defeating Akira Tozawa, before the knee issue pulled him out of WWE programming yet again.

Mahal revealed the operation on his right knee in 2019 was the first time he’d ever undergone surgery in his life and described not being on the road as a tough phase to go through. One in which he had to stay motivated throughout the period, challenging himself to get better with each passing day of rehab in order to stay in shape in the build-up to his big return.

“It was very tough… First time I’ve been injured, first time I’ve missed time away from WWE. So it was definitely hard at first. I went from being on the road, 200-plus days in a year performing every night to all of a sudden now I’m home, I’m just doing rehab every single day.

“Every athlete goes through this, they just kind of stay motivated and put the work in rehab, in training, and you can always come back stronger and better than before,” added Mahal, whose real name is Yuvraj Dhesi.

And there couldn’t have been a better platform for him to make his comeback than the event that’s a first for the WWE Universe in India. The company, after all, gets the highest viewership, both on YouTube as well as on television, from the country of a billion-plus people, and is now starting to develop as a base for them to recruit their future superstars. A special event on the 72nd anniversary of India officially becoming a republic thus comes as a surprise to few.

“What makes this event special is that it is especially for India. Obviously it’s Republic Day, January 26. It’s going to air them at 8 pm local time. This event is going to be spectacular. There’s going to be Desi style, a little bit of desi flavour, Indian flavour.

“There’s going to be lights, camera, something that you would expect almost from Bollywood, all the colours, all the sights and sounds,” said Mahal, who had wrestled Triple H at a live event in New Delhi in 2017, a match that he describes as the “biggest match that’s ever happened in India.”

From the days of the villainous Tiger Ali Singh during the Attitude Era, the Great Khali making a statement with his dominant win over The Undertaker in the summer of 2006 to Mahal becoming the first WWE Champion of Indian origin and Kavita Devi becoming the first female WWE Superstar from the country, India has slowly, but steadily established itself as something of a force to reckon in the business. And Mahal, for one, believes the rise in the number of Indian superstars in the leading pro-wrestling promotion in recent years is just the beginning.

The Modern day Maharaja is coming to WWE Superstar Spectacle

Would he miss not having fans on his return to the ring though? A bit of yes and no both from the man who also enjoyed a short reign as the United States Champion in addition to his memorable WWE Championship run.

“But nonetheless, just like a live WWE show, the ThunderDome is going to have pyro, lights, everything. It’s going to be a spectacular setup, so it’s going to be very close to the real thing,” said Mahal, who also teased at a possible reunion with the Singh Brothers in the upcoming show.

When asked to reflect on the highs and lows of his career spanning more than a decade, a major chunk of which has been spent at the WWE, Mahal said he was happy with all the lessons he learnt along the way, and that he wouldn’t “change a single thing.”

“Two things. Obviously winning the WWE Championship against Randy Orton, that was a big, big accomplishment, representing India on the world stage, being the first-ever WWE Indian champion. Second thing would be having longevity in WWE and going through different changes in my career, from debuting with the Great Khali to being in 3MB to being released from WWE and then making a comeback, and then within 10 months of making that comeback, becoming WWE Champion.

“So it’s not really one highlight, but I would say just my overall career, I wouldn’t change a single thing. I loved the way it’s went down, I’ve learnt so many lessons, I went through hardships and prevailed, and just like this injury right now, prevail and come back stronger and better than before, cause the Maharaja knows how to make a comeback,” Mahal signed off.