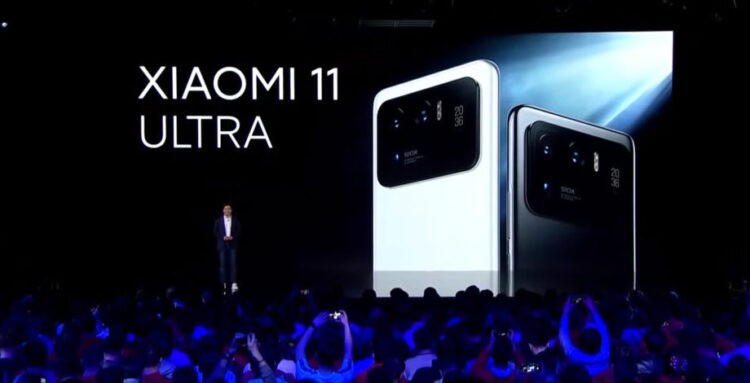 Xiaomi launched the Mi 11 back in December, with a global launch following in January this year. The firm didn’t offer a Mi 11 Pro at either launch though, but it’s just announced two premium Mi 11 series phones. The Mi 11 Ultra (seen above) is the top-end model here, following in the footsteps of last year’s cutting-edge Mi 10 Ultra. True to the leaks, the new phone stands out by virtue of a 1.1-inch rear OLED screen on the back. This screen is used for selfie previews, allowing you to take shots with the ultra-wide and standard cameras. But the screen also delivers always-on functionality and displays notifications. Furthermore, a super power saver mode is available that lets you only use the rear display.

A rear screen isn’t the only notable design decision, as the ceramic phone offers an IP68 rating for the first time in Xiaomi’s portfolio. It’s a long overdue addition for Xiaomi phones, but we’re glad to see the firm finally offer this feature.

Otherwise, you’re getting a Snapdragon 888 SoC, a 6.81-inch 120Hz QHD+ OLED screen with Gorilla Glass Victus and Dolby Vision, Harman Kardon-tuned speakers, and a 5,000mAh battery. Once the Xiaomi Mi 11 Ultra runs out of juice, you can take advantage of 67W wired and 67W wireless charging. This tops up the battery in just 36 minutes. And you can also recharge other devices thanks to 10W reverse wireless topups.

More reading: The best phones with wireless charging in 2021

Interestingly enough, Xiaomi says you can simultaneously shoot with several cameras thanks to “Multi Cam” functionality, selecting the cameras you’d like to shoot with. It’s also resurrecting an early Android feature which lets you record video with two different Mi 11 Ultra phones.

On the whole, it’s clear Xiaomi is taking aim at phones like the iPhone 12 Pro Max, Samsung Galaxy S21 Ultra, and OnePlus 9 Pro with this new device. Want something a little better than the Mi 11 but don’t want to splash out on the Mi 11 Ultra? That’s where the new Mi 11 Pro steps in, serving as a middle child of sorts in the Mi 11 family.

The phone sports some familiar core specs, namely the Snapdragon 888 SoC and a 6.67-inch QHD+ OLED screen, but you’re still getting some Ultra extras. That includes an IP68 rating, 67W wired and wireless charging (10W reverse wireless charging), and a 5,000mAh battery. Much like the Mi 11 Ultra, you’re getting a full charge in 36 minutes.

Xiaomi’s Pro version also delivers a 50MP main camera (GN2), a 13MP ultra-wide sensor (123 degree field of view), and a 5X 8MP periscope camera. The latter two cameras are a downgrade in theory from the Ultra’s 48MP ultra-wide shooter and periscope lens. Oddly enough, Xiaomi is also touting 1,920fps slow-motion video recording on the Pro and Ultra phones. A clip played at the event suggests that this might be interpolated video rather than native 1,920fps quality. We previously saw the Poco F3 emerge as a rebranded Redmi K40, but this isn’t the only K40 series phone to get the rebranding treatment. Xiaomi revealed the Mi 11i today as well, and it’s effectively a Redmi K40 Pro Plus with a new name.

The phone does miss out on Mi 11 Ultra and Pro features like an IP68 rating and a telephoto or periscope camera. But you’re still getting flagship power here as well as a high refresh rate OLED panel. You’re also getting a side fingerprint scanner, IR blaster, and NFC. The major difference between the phones is in the chipset category, as the Mi 11 Lite 5G is the first device with the Snapdragon 780G processor. Qualcomm’s new upper mid-range 5G silicon packs a 5nm design, a powerful octa-core design (4x Cortex-A78, 4x Cortex-A55), and Adreno 642 GPU. The Mi 11 Lite 4G, on the other hand, features a Snapdragon 732G processor that’s still a solid chipset but definitely less capable than the 780G.