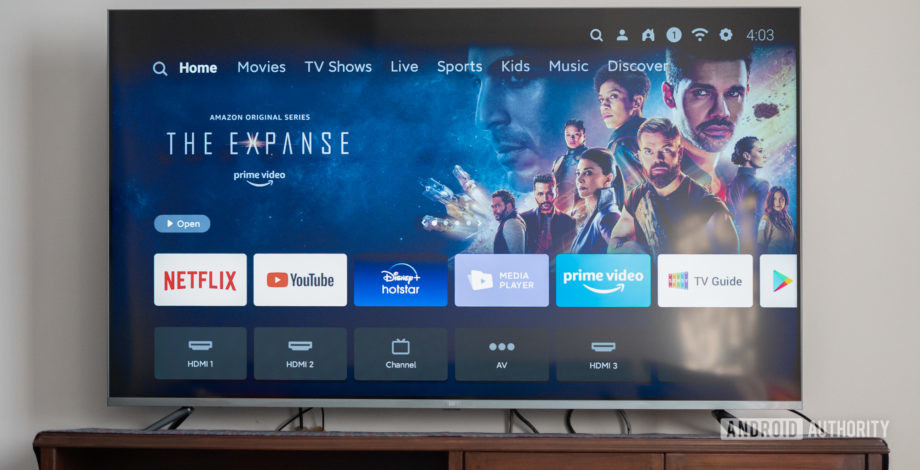 Xiaomi flipped the script on the smart TV landscape in India when it launched the first Mi TV in 2018. While the company can take credit for democratizing 4K televisions in the country, its bigger achievement is championing smart televisions.

This focus on value and software differentiation in a market with little competition in the affordable mid-range segment has helped the company dominate the smart TV market within a span of just two years. In fact, Xiaomi has been the largest smart TV player in India for the last ten quarters.

Xiaomi has previously had 55-inch panels, with the original 55-inch TV standing out for its ultra-slim profile. However, premium options have been a bit thin. Now, the company is trying to switch up the television market in India once again. It’s introducing QLED panels that are priced to move.

The Mi Q1 QLED TV is for all intents and purposes, an affordable QLED television. With that in mind, Xiaomi has smartly avoided any unessential design flourishes to keep costs low. Front and center is the 55-inch display. It is surrounded by a slim aluminum frame on all sides.

Xiaomi has done a great job at keeping bezels to a minimum which further helps with immersion. A silver bottom chin runs below the screen with the Xiaomi logo emblazoned on it. An LED below the logo subtly indicates the current status of the television. I like the fact that the LED indicator switches off once the television is on and doesn’t intrude on the experience.

Over on the right, a “Designed by Xiaomi” monogram adds some visual flair. However, it is subtle enough to be nearly invisible from a distance.

Two metal stands are included in the package. Attaching them to the television is a simple enough job, but the plastic threading at the base of the TV isn’t of the highest quality. It takes a bit of work.

The plastic threading for the stand mount isn’t the highest quality, but overall, the Mi Q1 QLED TV places a priority on function over form.

Nevertheless, this shouldn’t pose an issue for most users. You’ll rarely, if ever, remove the stands on the Mi Q1 QLED TV. While a wall-mount isn’t included in the box, Xiaomi will set you up with it should you require one during installation. The port selection is surprisingly good too. The Mi Q1 QLED TV includes three HDMI 2.1 ports with eARC support. There’s no variable refresh rate support, but that’s not a big miss given the price point.

Additional inputs include optical out, two USB 2.0 ports, an ethernet port, as well as an audio jack. On the wireless side, there’s built-in Wi-Fi ac and Bluetooth 5.0. Of note, I tested the television at a considerable distance from my Wi-Fi router and had no trouble streaming 4K content on Netflix or Blu-Ray rips from my NAS. Like smartphones, Xiaomi’s entry into the television market has less to do with hardware and more with software. Patchwall is the company’s software skin. It sits on top of vanilla Android TV and integrates with almost all the leading streaming services in India.

This integrated approach that works with both streaming services and traditional satellite television offers a level of recommendations that is rare to see. My favorite feature of PatchWall has to be universal search. With 24 streaming services onboard, you should be able to find exactly what you need no matter where it is streaming.

What is it like to use the Mi Q1 QLED TV?

A television is only as good as the panel it uses, and the Mi Q1 QLED TV is no exception. As the name suggests, the upsell here is the use of a QLED display. Popularised by Samsung, and seen in competing options from OnePlus and TCL, QLED panels make use of a quantum dot layer between the LCD panel and LED backlighting layers. This improves contrast levels and overall brightness.

For what it costs, Xiaomi has done a remarkable job with the Mi Q1 QLED TV. The 10-bit VA panel offers vibrant output out of the box. However, the default tuning has brightness levels cranked up and saturation levels set a bit too high. Nevertheless, that’s easily corrected via the 14 different picture quality modes on offer.

The Mi Q1 QLED TV offers a boatload of customization options to dial in the picture quality just as you like it.

In fact, it is astounding to see the level of control Xiaomi is offering over picture quality. Once calibrated, I was able to get a reasonably accurate picture.

MEMC or motion smoothening has increasingly become common to make videos look smoother. However, it has the unfortunate side effect of giving a soap opera-like look to cinematic content. The Mi Q1 QLED TV offers granular control here, with three levels of smoothening and the ability to switch it off completely. Now that the TV offers quick access to picture profiles, it’s also is a cinch to flip motion smoothening on when watching sports and turn it back off when not. With support for Dolby Vision and HDR 10, well-produced content looks stellar on the TV. Streaming an episode of The Queen’s Gambit in Dolby Vision was a treat. The Mi Q1 QLED TV presents one of the best viewing experiences in its price range.

If you are looking to pick up the television for next-gen gaming, the 60Hz refresh rate and lack of variable refresh rate (VRR) support might be a bummer. However, the dedicated gaming mode brings down input lag. Playing a twitchy dogfighter like Ace Combat on my PlayStation was very satisfactory.

That’s not to say that picture quality is perfect. The Mi Q1 QLED TV suffers from mildly inconsistent backlighting that becomes apparent in grey scenes. Additionally, viewing angles leave something to be desired. There is a very obvious shift in color reproduction when viewed anything but head-on. Finally, peak brightness could have been a bit higher to mitigate the highly reflective screen.

Switching over to audio, the Mi Q1 QLED TV outputs 30W with a split between four full-range drivers and two tweeters. They sound fine, and will more than suffice for casual movie watching. The combination of drivers has a focus on clarity, with vocals cutting through the middle loud and clear. The thicker dimensions of the TV afford a bit more low-end, but don’t go in expecting room-shaking bass.

The Mi Q1 QLED TV is satisfactory for bedroom watching. However, the support for an audio return channel over HDMI means that it can relay Dolby Atmos audio to a dedicated home theatre system if you’ve got one.

What is the Mi Q1 QLED TV remote like? The remote included with the Mi Q1 QLED TV will be familiar to anyone who has used a Mi TV or Mi streaming box before. It’s not the most well-built thing, but it has all the functionality you can hope for.

In addition to the direction pad, the power button, and the Google Assistant key, you will also find shortcuts for Netflix, Amazon Prime, as well as buttons for Patchwall and the default Android TV interface.

A fresh addition is a shortcut to mute the television by double-tapping the volume button. While it works well in theory, I found myself accidentally muting the television while trying to reduce the volume.

On the other hand, quick access to settings by long-pressing the Mi button is a very welcome addition. Finally, the TV can be put into a low-power state instead of a full shut down. This allows you to wake it up in about 5 seconds over the 30 plus that it usually takes for Android TV to boot up.

Is the Mi Q1 QLED TV good value for money?

Coming from Xiaomi, there’s no surprise that the Mi Q1 QLED TV offers tremendous value. It is one of the most affordable QLED panels available in India, and it cuts few corners to get there.

Alternatives include the OnePlus TV, which is priced at Rs. 62,990. It has much of the same functionality albeit with the TV stand being an additional accessory for some bizarre reason.

Then there’s the TCL C715 which is priced the same as the Xiaomi and is another solid option. However, the better support infrastructure in place for Xiaomi products might be more comforting to some buyers. Moreover, PatchWall is a significant value add in its software integration.

Finally, if you are willing to spend the big bucks, there’s no doubt that Samsung’s QLED options like The Serif offer a better panel with an equivalent premium attached to it. The Serif series is priced at Rs. 94,990.

What I like about the Xiaomi Mi Q1 QLED TV The Xiaomi Mi Q1 QLED 4K TV is easy to recommend to anyone who wants a good quality panel at a reasonable price. It’s not the best 4K TV on the market, but it matches and exceeds anything else at its price point.

The PatchWall integration is an excellent solution for users who still watch over the air television. Additionally, it smartly introduces streaming services through a content-first approach over the app-silos that exist today.