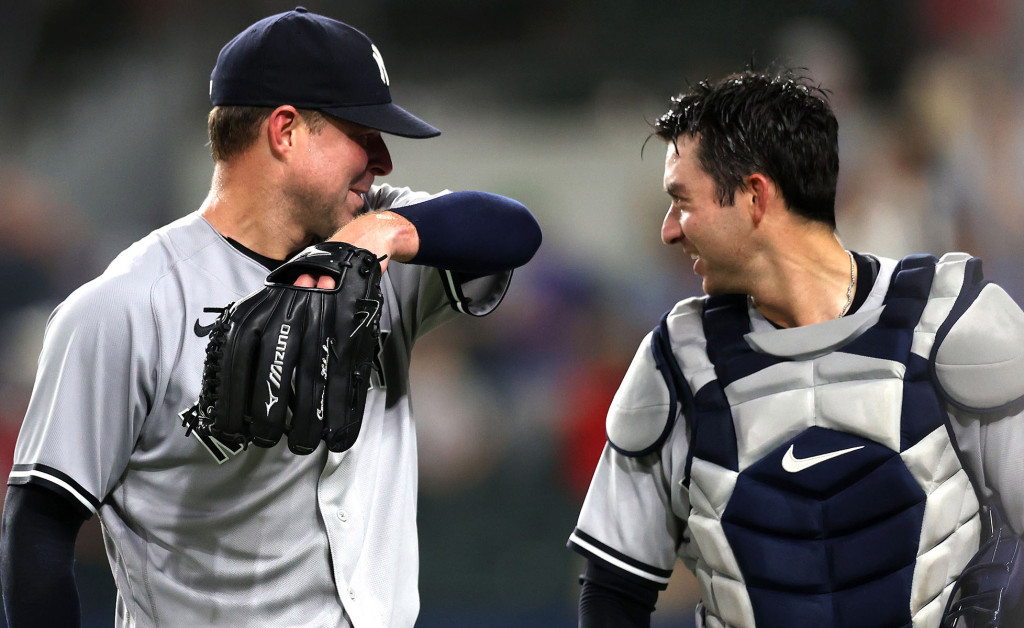 Among the many benefits of stoicism? Being oblivious to others’ suffering.

Because, the way Kyle Higashioka recalled it, he was a hot mess as the outs ticked down to the first major league no-hitter on his catching résumé.

“I was not calm at all,” Higashioka said, smiling, after his batterymate Corey Kluber threw his first career no-hitter, leading the Yankees to a 2-0 victory over the Rangers on Wednesday night at Globe Life Field. “I was doing a lot of hyperventilating on the bench. Luckily Corey didn’t notice.”

Of course he didn’t. The two-time American League Cy Young Award winner, in his first year with the Yankees, is known as the “Klubot” because of his ability to block out all distractions and focus on his task. From his vantage point, Higashioka — who also scored the Yankees’ first run, hustling from first base on Tyler Wade’s sixth-inning triple — handled the challenge flawlessly.

“He was unreal back there tonight,” said Kluber, who vowed to buy Higashioka a gift worthy of the occasion. “The way he goes about calling a game, the way we see things, think about things, we kind of make sense to each other. I think that, especially, when they were geared up for fastballs, he was on it. When they were looking for off-speed stuff, he was on it. He had a really good feel of what they are trying to do and called a great game back there.”

Higashioka said he caught a pair of no-hitters in the minor leagues, yet those couldn’t compare to this one: “In the eighth and ninth innings, I was having a mini-panic attack every time I went out there. So I was extremely nervous. But that was incredible.”

With Kluber flawlessly executing his sinker, curveball, changeup and cutter, “You’re almost at a loss for words,” Higashioka said. “It’s like, ‘Keep doing what you’re doing.’ The only thing I was really telling him was, ‘Let’s just keep being aggressive in the zone, attacking these guys,’ which he was doing all night. And it was awesome.”

He said this calmly, and happily, history accomplished.