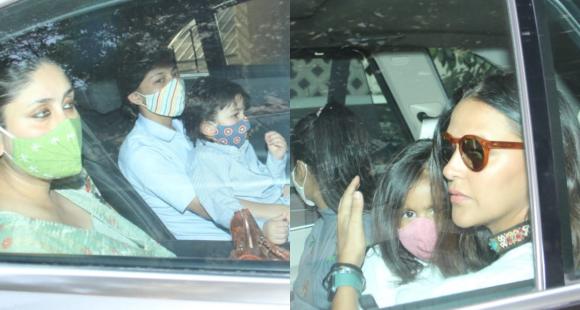 Karan Johar threw a fun bash for all of Yash and Roohi’s friends which included Kareena and Saif’s son Taimur Ali Khan, Mehr and AbRam Khan among others.

Karan Johar made sure to not let the pandemic play spoilsport as his close friends and children Yash and Roohi”s friends came together to celebrate their fourth birthday. For the unversed, Yash and Roohi turn four today and their doting dad wished them with a super fun video. Taking to Instagram, Karan wished the loves of his life’ as they roasted the filmmaker’s fashion sense.

That’s not all. Karan also threw a fun bash for all of Yash and Roohi’s friends which includes Kareena and Saif’s son Taimur Ali Khan, Neha Dhupia and Angad Bedi’s daughter Mehr, Gauri Khan and son AbRam Khan and Tusshar Kapoor with his son were snapped at Karan’s residence. Designer Manish Malhotra and Natasha Poonwala with her son were also spotted leaving after the fun evening. Later in the evening, Rani Mukherjee was also seen with daughter Adira. The actress who keeps a low profile was seen out and about almost after a year.

Wishing his adorable twins, Karan wrote, “A birthday toodles is a must! The fashion critics are back to roast me! Happy birthday to the loves of my life! #roohiandyash.”

Check out the photos below: ALSO READ: WATCH: Karan Johar wishes the ‘loves of his life’ Yash and Roohi on their birthday and they roast him as usual