Home EntertainmentGossips Yash, Prashanth Neel and other cast members of KGF jam up ahead of the film’s release; See photos

Yash, Prashanth Neel and other cast members of KGF jam up ahead of the film’s release; See photos 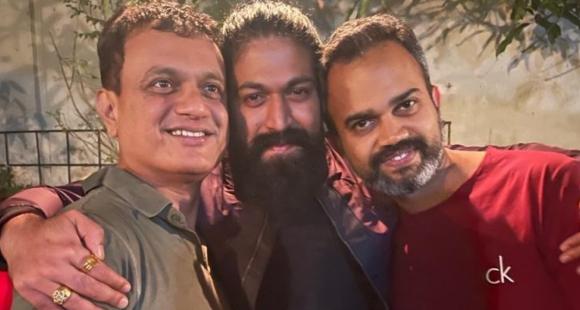 In the photos shared by Prashanth Neel, the cast and crew of the KGF franchise can be seen having a gala time.

Yash, Prashanth Neel and other cast members of KGF jam up ahead of the film’s release; See photos

Taking to his Twitter space, pan Indian director Prashanth Neel shared some photos from his recent jam with Yash and the other cast and crew of the KGF franchise. Sharing the photo, he stated that the journey started as a great one and it will be a never-ending one. He wrote, “A journey with a great start and no end #KGFChapter1 #kgfchapter2 #kgffamily”. In the photos, the cast and crew of the pan Indian film can be seen having a gala time.

It was announced earlier by the makers that KGF: Chapter 2 will hit the big screens on July 16. KGF 2 has Srinidhi Shetty playing the lead female role, while Sanjay Dutt, Prakash Raj and Raveena Tandon will be seen in key supporting roles. Dutt plays the role of main antagonist Adheera and his intense avatar has already set high expectations among the moviegoers. The sequel will pick up from where it was left off at Kolar Gold Fields. KGF sequel will witness a face-off between the two characters which are Sanjay Dutt”s Adheera and Yash’s Rocky.

Also Read: Jr NTR looks dapper in a formal black outfit as he is spotted in Hyderabad; See photos

KGF: Chapter 2 will be released in five languages namely Kannada, Telugu, Tamil, Malayalam and Hindi. The film’s teaser was released ahead of Yash’s birthday. Sharing the teaser, the makers wrote, “A promise was once made, that promise will be kept! Wishing Rocking Star @TheNameIsYash a very Happy Birthday”. Yash, who shared the teaser, wrote on his Twitter space, “KGF Chapter 2 Teaser out now…”