Home EntertainmentBollywood Year-ender 2020: Celebs who announced their pregnancies and had babies this year

Year-ender 2020: Celebs who announced their pregnancies and had babies this year 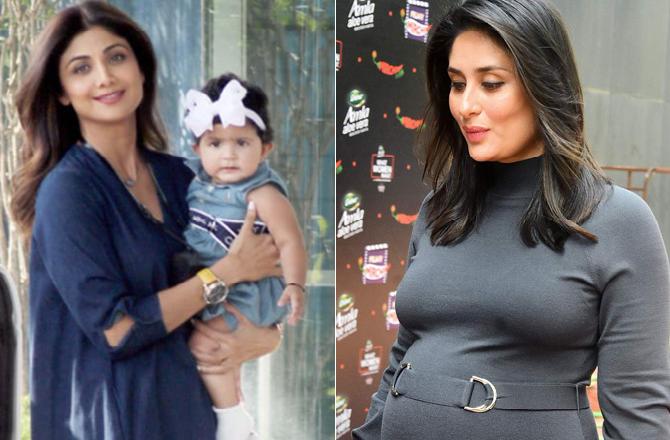 The coronavirus lockdown certainly put a damper on any big plans one might have had this year, but that didn’t keep our celebrities from adding some happiness to their lives. In a year filled with anxiety thanks to COVID-19, some of our Bollywood and television celebs welcomed little bundles of joy, while some others announced that they’re on their way to parenthood. Like they say, every cloud has a silver lining! So, without further ado, here are celebs who announced their pregnancies and some who had babies in 2020:

Gully Boy actress Kalki Koechlin announced her pregnancy in September 2019, and became a proud mama to daughter Sappho on February 7, 2020. The actress shares her baby girl with boyfriend Guy Hershberg, who’s an Israeli musician. Kalki shared a poignant note on Instagram when she announced the happy news to the world; she wrote, “Please welcome Sappho. Born 07/02/20. She just spent 9 months wrapped up like a momo in my uterus. Let’s give her some space. Thank you for all the good wishes and positive energy pouring in…”

Shilpa Shetty Kundra and her businessman husband Raj Kundra became proud parents to a baby girl born through surrogacy on February 15, 2020. The couple named their little girl Samisha. Shilpa and Raj already have a son, Viaan, who was born in May 2012. Talking about their daughter, Raj Kundra told mid-day, “We love being parents, and we loved every bit of it with Viaan Raj [son]. Now, the joy and happiness has doubled with Samisha. We have wanted a second one for a long time. God was kind, and science was in our favour. This child is the answer to all our prayers, mostly Viaan’s. This feeling is surreal.”

Queen actress Lisa Haydon and her entrepreneur husband Dino Lalvani became parents to a baby boy for the second time in February this year. The couple, who named their second son Leo, have a son named Zack, born in 2016. Sharing a heartfelt note on Instagram about her two babies, Lisa wrote, “This little blessing has touched my heart in a way nothing else ever has. Been totally speechless and in love watching you both and can’t believe I get to be your mama. ‘Leo & Zack’ #Brothers”.

Serbian actress Natasa Stankovic and her cricketer husband Hardik Pandya surprised the whole world when they announced their engagement in January this year. But what really took everyone aback was the couple announcing that they were expecting a baby! Natasa and Hardik welcomed a baby boy, whom they named Agastya, on July 30, 2020. Natasa shared a post on Instagram about son Agastya and wrote, “When I hold you, life makes sense. #mamasboy #blessings (sic).”

Sumeet Vyas, who became a household name after his adorable performance in TVF’s Permanent Roommates got married to Bade Acche Lagte Hain actress Ekta Kaul in September 2018. The cute couple had a baby boy in June this year. Vyas shared the joyous news on June 4 on Twitter and wrote, “It’s a boy. Shall be called VED. Mamma and Daddy are acting cliché… smothering the child every few minutes…”

Bollywood’s sweetheart Amrita Rao gave birth to a baby boy, Veer, in November this year. Her pregnancy news came as a shocker to her fans when she announced it, as the actress hid her pregnancy very well for over eight months and no one had a clue! Amrita and husband RJ Anmol released a statement that read, “Amrita Rao and RJ Anmol welcomed a baby boy this morning. Both the mother and baby are healthy and doing well. The family is ecstatic and both Amrita and RJ Anmol thank everyone for their wishes and blessings.”

Calling himself ‘Charlie’ and his three daughters his ‘angels’, Karanvir Bohra announced the birth of his third daughter on December 21, 2020. Karanvir and Teejay first became parents to twin girls Raya Bella and Vienna on October 19, 2016. Talking about his baby girls, Karanvir said, “I am proud to be a father to three beautiful daughters! Teejay and I (are) over the moon to have this lovely angel in our lives. Bella and Vienna are also very excited to welcome home their baby sister. The feeling is amazing, and we are all on top of the world as it’s now going to be an absolute full house!”

In August, Anushka and Virat shared the news of them expecting a baby. The couple is all set to embrace parenthood in January 2021. This was one of the most high-profile pregnancy announcements of 2020, and everyone, from the couple’s fans to their friends and family are excited about it. Congratulations poured in from all quarters with celebs like Parineeti Chopra, Taapsee Pannu, Sania Mirza, Dia Mirza, Mouni Roy, Kiara Advani, Sanya Malhotra, and a host of others wishing them.

After their firstborn, Taimur, took the world by storm in 2016 with his utter cuteness and charm, Bebo and Saifu gave their fans another reason to rejoice when they announced that they were expecting their second child in 2021. Talking about Saif’s reaction to the “good news”, Kareena said in an interview, “Unfortunately, in my house there is nothing filmy as such. Because Saif is very normal and relaxed. Of course, he is always happy to hear it. So like I said, it wasn’t planned but it was something we really wanted to celebrate and we are really enjoying it together.”

Telly actress Anita and her businessman husband Rohit, too, are expecting their first child in 2021. The Naagin actress posted a cute Instagram video in October 2020 to make the announcement. In the video, the couple relive their love story, with shots that include moments of their engagement and the exchange of wedding vows. Rohit is seen kissing Anita’s baby bump at one point. “Love you @rohitreddygoa #gettingreadyforreddy,” Anita captioned the post.

Here’s wishing all these couples all the very best and congratulations for their lockdown babies!