Home EntertainmentBollywood Year-ender 2020: From Tanhaji to Baaghi 3, how this year fared for Bollywood

Year-ender 2020: From Tanhaji to Baaghi 3, how this year fared for Bollywood 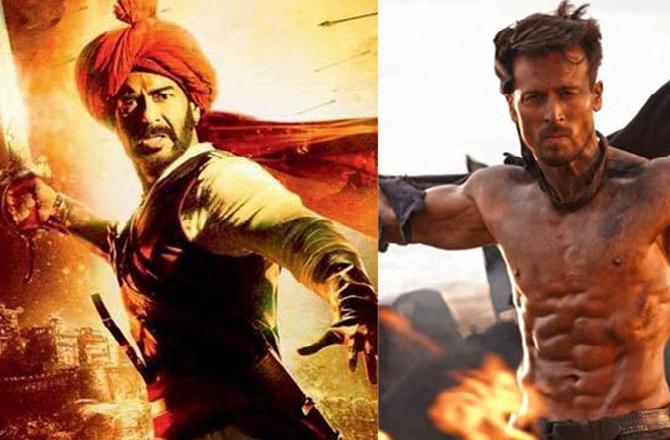 2020 was supposed to see the release of some massive films and potential blockbusters, but nothing could stand in front of the magnanimity of the coronavirus pandemic that shook the globe. With a brisk encounter with the movies for the first three months of the year, we saw a couple of films that were hailed by the audiences and critics.

And when the cinemas reopened in November, we saw the release of two films that were bound to struggle due to the continuing fear of the virus. It was the year to stay at home, but here are some films that made their way to the cinemas and this is how they fared:

In this year’s first and last blockbuster, Ajay Devgn and Saif Ali Khan clashed in a glorious and gritty battle that showed how period sagas could culminate in a running time of merely two hours. Devgn put his intense eyes to good use and Khan’s chilling aura helped him deliver a throwaway performance where he could be seen having fun. In a battle between two warriors, it was the box-office that won, with a staggering collections of over Rs 269 crore. (As per the data reported by boxofficeindia.com)

Deepika Padukone and Meghna Gulzar’s drama inspired by the real-life story of acid attack survivor Laxmi Aggarwal was an emotional tale of human spirit and triumph. It didn’t really matter how much money it made as long as it struck a chord with the people who were eager to know what happened on that fateful day when a woman’s life changed forever.

Remo D’Souza’s dance trilogy didn’t end the way the team expected. This was planned and designed to be the grandest dance film the nation ever saw, with little help from novelty and nimbleness. Maybe the lack of breathlessness in dance and a bizarre narrative played spoilsport and made this Varun Dhawan-Shraddha Kapoor starrer a commercial failure. The last film of the franchise crossed a century at the ticket windows, this one ended its run at Rs 62 crore.

In one of the most underrated films of the year, Kangana Ranaut played a Kabaddi player who dreams of making a comeback after leading a domesticated life for years. The sameness in the conflicts already shown in tons of sports dramas overpowered the sincerity in the performances. This one deserved to pack a punch!

Aditya Roy Kapur and Disha Patani’s thriller gave a feeling it could be twisted and psychotic in its feel and treatment. The end result was a run-of-the-mill revenge drama with music as its saving grace. Aditya Roy Kapur bulking up like a beast and Disha Patani’s perfectly toned body were attention-seeking, and it may have performed better than some of the man’s last few misses and misfires like Fitoor and Ok Jaanu, the collections suggest it was only a below average grosser with Rs 57 crore.

Imtiaz Ali is a filmmaker excited by metaphors. Jab Harry Met Sejal wasn’t just about a woman in search of her lost ring, she was obviously searching for herself. Had it been an Abbas-Mustan film, the ring would have been discovered inside the wallet of the man she was traveling with throughout. But Ali isn’t intrigued by such plot twists. In Love Aaj Kal, there were tons of such metaphors and deep definitions of love and relationships that desperately needed better leads and performances. It had to fail, both critically and commercially.

Ayushmann Khurrana is a man who has seven consecutive hits behind him, but this couldn’t be his eighth. It was a homosexual comedy that had to star Khurrana since he has championed the cause of picking up taboo subjects and making them entertaining and engrossing. Raking over Rs 58 crore at the box office, the verdict of this comedy was below average.

Dharma Productions backing a horror film with Vicky Kaushal in the lead sounded like a crackling idea. This was announced as a trilogy, with the first story unfolding on a sprawling, scary ship that hides a horrific tale of deceit and death. There was some personal palpable excitement to see how this genre is explored at the hands of people other than Vikram Bhatt and Ram Gopal Varma, but the end result wasn’t memorable. The only scary part was the box office (Rs 30 crore), which may have scared the makers to carry the franchise forward.

The globe was preparing for its first lockdown in history, and Tiger Shroff was preparing to save his brother who has been held captive in Syria. He takes on the entire nation and almost wipes them out from the world map, as he scowls and screeches in one scene. There was absolutely nothing in this action-thriller, but thanks to the lethal and loyal following of its leading man, it made over Rs 92 crore at the box office.

Who would’ve thought this would be the last time we would see Irrfan Khan on the celluloid? And who would’ve thought this would also be the last release of the year before the cinemas reopened in November? As fate would have it, the cinema halls across the country shut down just the day after this drama came out and it failed to attract a huge crowd, unlike its prequel. Khan’s swan song needed a giant audience.

Also, we saw the releases of Indoo Ki Jawani and Suraj Pe Mangal Bhari opening in the cinemas with all the precautions, but the panic around and the fear of the virus still continues to loom large, which is why both films have received a tepid response from the viewers. Let’s see what 2021 has in store, hopefully not a sequel to COVID-19.