Year-ender 2020: Top 10 celebrity weddings in pandemic that made headlines 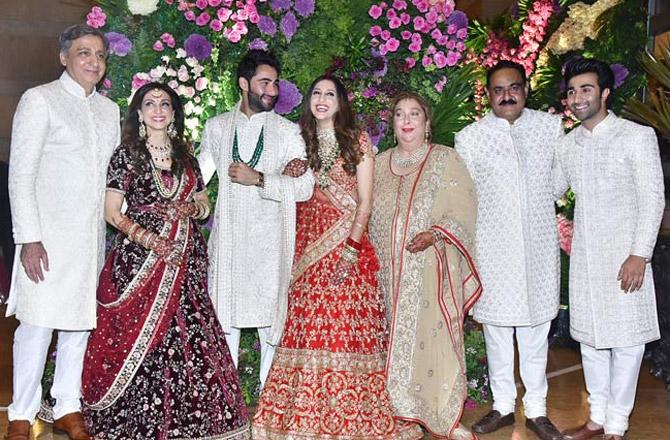 2020 was not an ordinary year. The year saw some of the biggest testing times for the human race, due to the pandemic owing to the novel Coronavirus. However, the lockdown and social-distancing norm did not stop celebs to get hitched. The year saw many successful and glamorous singles of Bollywood, as well as the small screen, settling down.

We look at some of the weddings of 2020, which made headlines:

Aditya Narayan shone as the groom in his royal sherwani and wedding safa. Shweta looked like the quintessential bride in her soft pink embellished lehenga, paired with statement jewellery.

On December 3, Aditya shared the first picture from their wedding and wrote alongside, “I will find you. And I will marry you.”

Gauahar Khan and Zaid Darbar have been in a relationship for a while and the couple took it to the next step on December 25, as they got married on the eve of Christmas.

Sharing two dreamy pictures of themselves, this is what the couple wrote to tell the world about their wedding- “The year 2020 has been anything but ordinary, & our love story through it all has been nothing short of extraordinary! It gives us immense koi to announce that we are tying the knot and embarking on a journey of forever! Keeping the current scenario in mind, we will be celebrating the big day with our family in an intimate ceremony. We seek your blessings & love & are eternally grateful for the constant support & the outpour of warm wishes we have received. We hope for every soul to find its mate & pray for every heart to find it’s reason to beat.”

After taking everyone by surprise when she announced her departure from the showbiz world earlier this year, Sana Khan sent shockwaves further by announcing that she has married Surat-based Anas Saiyad, who is a Maulana.

Yeh Rishtey Hain Pyaar Ke actor Shaheer Sheikh announced his engagement to Ruchikaa Kapoor on November 24, and three days later the couple got hitched! Shaheer and Ruchikaa exchanged vows in a court marriage due to the COVID-10 pandemic and will be planning a traditional wedding in June next year.

After the court marriage, Shaheer and his new bride visited the former’s hometown in Jamme, where they had a small ceremony, and then another ceremony at Ruchikaa’s home in Mumbai.

He shared this picture on his wedding day!

Neha Kakkar took all her fans by surprise when she announced she was getting married to singer Rohanpreet Singh. At first, many weren’t entirely sure if this was really happening or if it was another publicity stint/prank like the one that Neha and Indian Idol host Aditya Narayan played on the audience when they hinted that they were going to get married.

Neha, however, did get married on October 24, 2020, and it was a treat for all her fans and social media followers to see pictures from all her wedding functions.

On October 30, Kajal Aggarwal tied the knot with entrepreneur beau Gautam Kitchlu. The traditional ceremony was performed at a South Mumbai hotel with only close pals and family in attendance due to the prevailing scenario.

Kajal Aggarwal was resplendent in her red heavily embellished lehenga, traditional jewellery which included the red chooda and golden ‘kaleerein’. Gautam Kitchlu, too, looked dapper in his ivory sherwani with a baby pink dupatta. The whole theme of the wedding was soft, mellow colours, and the couple looked like they were made for each other!

Rana Daggubati tied the knot with Miheeka Bajaj at the family-owned Ramanaidu Studios in Hyderabad on August 9, 2020. The Baahubali actor sprung a surprise on his fans and almost everyone in the industry when he made his relationship with girlfriend Miheeka Bajaj official on May 12, 2020. Within 10 days of confirming his relationship with Miheeka, Rana made it official with a Roka ceremony.

Nehha Pendse, known for her stints in TV shows like Bigg Boss and May I Come In Madam, and films such as Daag: The Fire, Devdas, and Natsamrat, tied the knot with beau Shardul Singh Bayas on January 5, 2020, in Pune in a Maharashtrian wedding.

Armaan Jain got hitched to Anissa Malhotra on February 4, and their wedding festivities were no less than what we see in Bollywood films — especially the couple’s reception, which was attended by who’s who of the industry. Armaan and Anissa’s wedding saw a galaxy of stars gracing the event. Joining them were Amitabh Bachchan, Jaya Bachchan, Abhishek Bachchan, Aishwarya Rai Bachchan, Kareena Kapoor Khan, Saif Ali Khan, Karisma Kapoor, Kiara Advani, Karan Johar, Tara Sutaria, Ananya Panday and Arjun Kapoor among many others.

Armaan is the son of Rima Jain, who is Rishi and Randhir Kapoor’s sister. Armaan and Anissa got engaged last year.