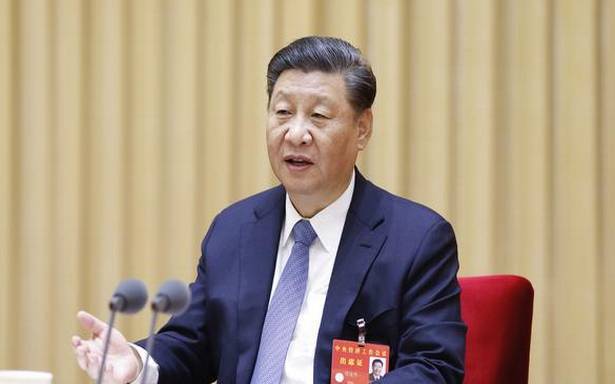 A year that began in China with the country’s leadership facing searching questions about its handling of a new pandemic that struck the city of Wuhan ends with President Xi Jinping firming up his political control.

If 2020 started as China’s annus horribilis, the year has, in the eyes of many strategic experts in Beijing, only hastened China’s ascendancy and narrowed the gap with the United States, its great rival.

Beijing, having broadly controlled the coronavirus at home, is now leading a global economic recovery, as well as adopting, as India discovered through this summer’s border crisis, an increasingly muscular posture abroad. In contrast, the U.S. has struggled with both its response to the pandemic as well as unprecedented political divisions at home, manifested in a closely fought election that ended with the defeat of President Donald Trump, whose term in office marked a deterioration in relations with China triggered by a trade war.

A crisis in Wuhan

Few in China would have expected the year to end as it does. China’s initial fumbling of the pneumonia outbreak that began last December, when the leadership in Wuhan delayed action for three weeks, has now become a footnote, with the leadership showcasing China’s recovery as underlining the superiority of its political system.

Back in February, the death of the whistle-blower doctor Li Wenliang had led to an outpouring of criticism, which prompted Beijing to fire the Communist Party leaders in charge of Wuhan and Hubei province. Mr. Xi then acknowledged the pandemic had posed “a major test” of China’s governance.

Yet by the summer, China’s controlling of the outbreak, thanks to strict lockdowns and a sweeping testing and tracing system, helped the Party weather the storm. Coupled with the failure of the U.S. to tackle the coronavirus effectively— which the Party propaganda has ceaselessly highlighted as a vindication of its leadership — signs are Mr. Xi remains as strong as ever heading into 2021, a sensitive year that will see the Party celebrate its centenary in July.

Heading into the anniversary, the trend of political centralisation under Mr. Xi is only expected to continue, as also the shrinking space for dissent. Mr. Ren, the real estate tycoon, was in September sentenced to 18 years in jail ostensibly on corruption charges, although the real offence was his critical essay.

The previous month, another prominent critic of Mr. Xi’s from inside the Party, Cai Xia, a professor of the Party School, was expelled from the elite institution that Mr. Xi once headed over her criticisms of his leadership style, which included an observation that a growing number of Party officials were opposed to the political direction under him but were afraid of speaking out.

China’s subsequent recovery from the pandemic helped the leadership mute its critics, with the world’s second-largest economy likely to be the only major country to grow in a pandemic-hit year. China in the first quarter contracted by 6.8%, but has since recovered strongly, 3.2% growth in the second quarter and 4.9% in the third. Shuttered factories have reopened, although the global slump remains a headwind.

That has prompted Mr. Xi to double down on his push for greater self-reliance, which he has called a “dual circulation” model that strikes a better balance between relying on domestic consumption and external trade.

A key Party plenum held in October discussed “a new development pattern” for the 14th five-year plan (2021-2025) and also laid out a “Vision 2035” blueprint that emphasises more sustainable growth.

China is still struggling with rising debt, a problem worsened by this year’s economic relief measures, and is also pushing for cleaner growth, with Mr. Xi this year announcing a target to go carbon neutral by 2060, which will require a reduction of coal in the energy mix from 58% to less than 50% by 2025.

If 2020 has reinforced the belief in Beijing of its global ascendancy, it has also been marked by an increasingly muscular approach abroad on all of its frontiers.

China’s homegrown aircraft carrier, the Shandong, sailed across the Taiwan Strait and the South China Sea after being inducted into the navy this year and will be combat ready by early 2021. Beijing has made clear to the new administration in Washington it will brook no interference in its “internal affairs”, even as it has pursued increasingly hard-line policies in Hong Kong, where a new national security law has tightened its grip, and in Xinjiang, where it has hit out at any criticism over the internment of more than one million Uighurs in “re-education” centres.

In early May, China appeared to disregard three decades of a carefully built consensus with India as it mobilised two divisions along the Line of Actual Control (LAC), in a move that officials in Delhi saw as aimed at unilaterally redrawing the LAC in Ladakh.

A clash in Galwan Valley in June that led to the loss of 20 Indian soldiers and an unknown number of Chinese soldiers marked the most serious border crisis with India since the 1960s, leading many former Indian officials to describe 2020 as a major inflection point in relations with China.

As the year ends, a sub-zero LAC remains tense with neither side agreeing on a plan to disengage, with the expectation in India of continued hostilities as the snow melts in the spring and tensions on the border to dominate the relationship next year.