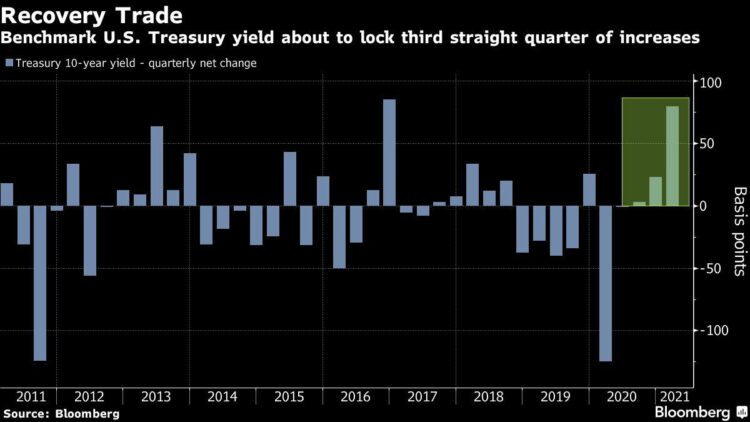 (Bloomberg) — Treasury yields rose with commodities before U.S. President Joe Biden unveils an economic plan including a $2 trillion infrastructure boost. Stocks were mixed as traders weighed inflation and the tax impact of the new plan.

U.S. index futures and European stocks were little changed after Asia’s equity benchmark posted a second-day decline. The dollar fluctuated between gains and losses, still heading for its best quarter in a year. The Bloomberg Commodity Index and emerging-market currencies led by the Russian ruble climbed for the first time in three days.

Investors, rattled by the meltdown at Bill Hwang’s Archegos Capital Management, are turning their attention to growth and inflation as volatility spurred by the forced sales subsides. While Europe’s struggle with inoculations and the resurgence of the coronavirus have tempered growth expectations, the U.S. vaccine rollout is surpassing targets.

“Even if President Biden’s infrastructure plans come with a considerable sting in the tail, the economic reflation and reopening story should limit any pullback in interest rates,” ING Groep NV strategists including Antoine Bouvet and Padhraic Garvey wrote in a note. “The rise in rates is about more than fiscal stimulus.”

Banks weighed on Japan’s equity gauge after Mitsubishi UFJ Financial Group Inc. joined the list of firms globally to take a hit from the Chinese shares retreated while Australia’s index outperformed. The dollar-yen pair was on course for a sixth-day rally amid a report Hitachi Ltd. will pay $8.5 billion to acquire U.S. software firm GlobalLogic Inc.

Ten-year Treasury yields rose for the fourth time in five days, trading near a 14-month high. Gold steadied after a two-day slump but remained below 1,700 per troy ounce. West Texas Intermediate crude rose before the April 1 meeting of OPEC and its allies.

A gauge of China’s manufacturing industry picked up in March, suggesting the domestic recovery is gathering pace as economic activity returns to normal and demand strengthens.

Some key events to watch this week:

President Biden is expected to unveil his infrastructure program Wednesday.EIA crude inventory report Wednesday.OPEC+ meets to discuss production levels for May on Thursday.China Caixin PMI due Thursday.U.S. employment report for March on Friday.Good Friday starts the Easter weekend in countries including the U.S., U.K., France, Germany, Australia and Canada.

These are some of the main moves in financial markets: