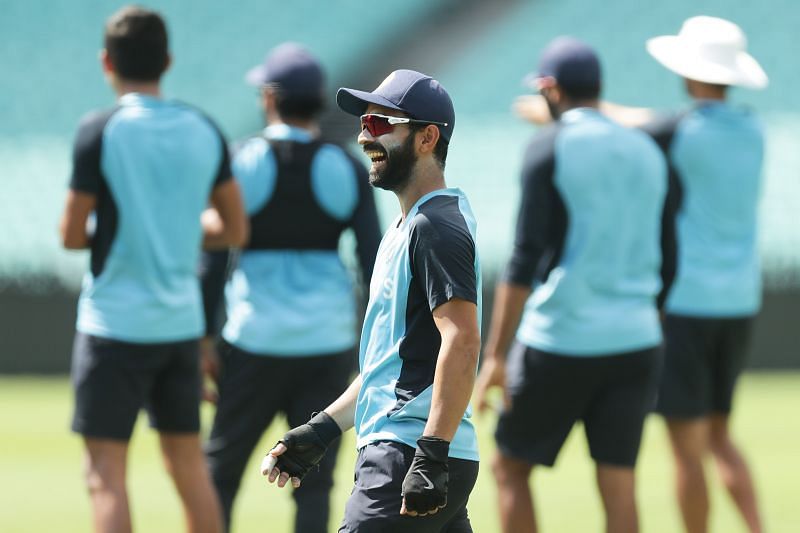 Ajinkya Rahane, in a chat with Harsha Bhogle, revealed why he didn’t cut a cake that had a ‘kangaroo’ on it. As kangaroo is Australia’s national animal, the stand-in Indian captain one said that doing so would have been tantamount to disrespect for opponents.

Ajinkya Rahane led India astutely in the Border-Gavaskar Trophy win, which will be remembered for ages. Upon his arrival in India, the stand-in skipper was offered a chance to cut a cake with a ‘kangaroo’ on it. However, the classy Rahane refused to do so.

In a chat with Harsha Bhogle, the 32-year-old explained why he didn’t cut the kangaroo-themed cake.

“Kangaroo is their national animal. I don’t want to do that. You give your opposition respect; you treat them well even if you win or even if you create history. You have to have respect for your opponent and other countries. That is why I took the decision against cutting the cake with a kangaroo on it.” Ajinkya Rahane told Harsha Bhogle.

It was Ajinkya Rahane who led India’s fightback with a century in the Melbourne Test following the Adelaide debacle.

Rahane didn’t make a significant contribution with the bat in the next two Tests, but the stand-in skipper won many plaudits for the way he marshalled the injury-stricken visitors.

‘Virat will always be the captain of the Test team’: Ajinkya Rahane

In the aftermath of the series win, there were many experts who thought Ajinkya Rahane could be better of leading India in Tests. However, the player insisted that Virat Kohli is still the captain, and he was only filling in for the former in Australia.

“Nothing changes. Virat was and will always be the captain of the Test team, and I am his deputy. When he was absent, it was my duty to lead the side and my responsibility to give my best for Team India’s success.” Rahane said to PTI.

Ajinkya Rahane also went on to add that he and Kohli share a good relationship. Virat Kohli will be back leading the side when India take on England in a four-match Test series starting on 5th February in Chennai.

Always wanted to ask @ajinkyarahane88 about the cake he was offered with a kangaroo on it and why he refused to cut it. The small things that tell you more about a person. More of this conversation on his FB page. pic.twitter.com/YZwwQKlFJq

"You have to have respect for your opponent," Ajinkya Rahane on why he refused to cut a kangaroo-themed cake