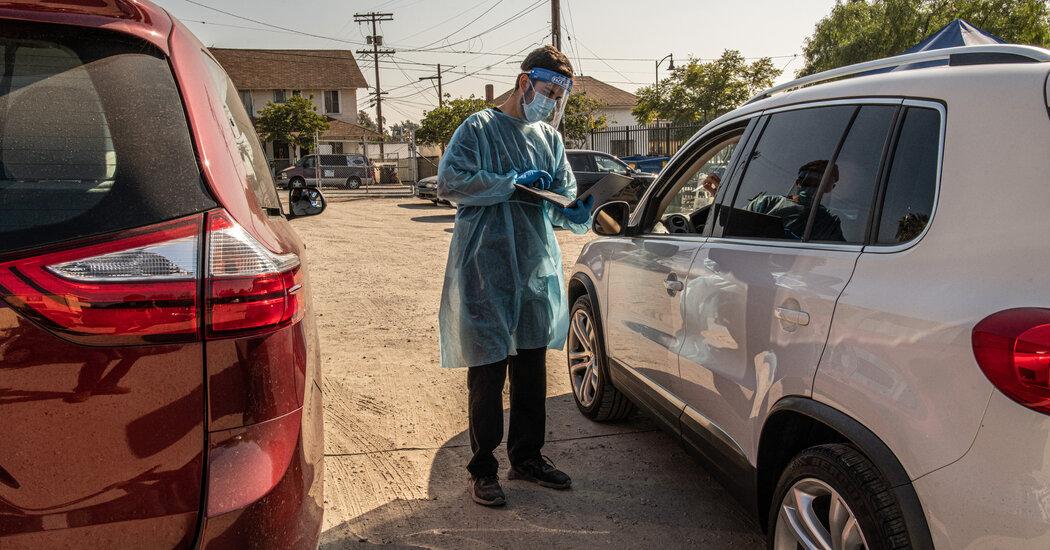 A very different Thanksgiving for Americans

Families are still gathering for their traditional turkey dinners Thursday for Thanksgiving, but many are celebrating in small groups or forgoing the holiday altogether, as the numbers of coronavirus infections and deaths are once again on the rise.

The outbreak in the U.S. appears to have entered a new phase in recent days, with swift resurgences in cities like Baltimore, Los Angeles and Miami, and with first-time spikes in smaller cities. The country has added two million new cases in the past two weeks, a record, and reported more than 2,200 virus-related deaths on Tuesday alone, the highest daily total since May 6. Hospitalizations are also breaking records daily.

The nation’s health experts have pleaded with Americans to stay home over the Thanksgiving holiday, even as airports recorded more travelers on Sunday than on any day since the pandemic took hold in March.

The skyrocketing numbers have caused some Americans to rethink their usual Thanksgiving gatherings. Only about 27 percent of Americans plan to dine with people outside their household, according to a survey requested by The Times.

Thailand takes aim at criticism of the monarchy

The number 112 strikes fear in Thailand. It refers to Section 112 of the country’s criminal code — the lèse-majesté law — which makes insulting or defaming the king an offense punishable by three to 15 years in prison.

For the first time, the law is being used against leaders of the protest movement calling for changes to the monarchy and the political system. Parit Chiwarak is among about a dozen protest leaders who have received a summons to face multiple charges under the law.

Quotable: “I am not scared,” Mr. Parit said on Tuesday night, after receiving his summons. “I am more worried about the country if they are still using this 112 in politics like this. This will cause the monarchy to deteriorate further.”

Context: The revival of 112 came hours before a rally in Bangkok on Wednesday during which protesters urged King Maha Vajiralongkorn Bodindradebayavarangkun to return his fortune to the people. Tax revenues, they said, were being used to fund his lavish lifestyle and fill the coffers of one of the world’s richest monarchies.

The Argentine who became one of the world’s greatest players died on Wednesday in Tigre, Argentina. He was 60.

His spokesman said the cause was a heart attack, after years of health problems. Argentina has declared three days of national mourning for the player who took up the sport in dusty streets “with an urchin’s resourcefulness,” our reporter writes. He turned professional by age 15, starring with Napoli and Barcelona and then in 2010 coaching Argentina in the World Cup.

He scored one of the game’s most controversial goals and one of its most celebrated in the span of four minutes in 1986 against England — punching the ball into the net with his fist for the first, and then deftly maneuvering 70 yards through five British players for the second.

Personal struggles: In 2000, FIFA voted Maradona and Pele of Brazil as the sport’s two greatest players. Yet while Pele’s legend grew into international reverence, Maradona’s ability to surprise and startle on the field developed a darker edge as he became addicted to cocaine during his playing days in the 1980s.

If you have 7 minutes, this is worth it

Four years ago, Maliha Javed, an immigrant from Pakistan, was not paying attention to politics. She did not vote. But the election of Donald Trump changed that. A Muslim travel ban and child separation policy affected her friends or hit close to home. This year, she voted.

The emergence in Georgia of Asian-American voters like her helped propel Joe Biden to the presidency. Asian-Americans are the fastest-growing segment of eligible voters out of the major racial and ethnic groups in the country; their numbers, nationally and in the county where Ms. Javed lives, more than doubled between 2000 and 2020.

Shark attacks: Eight people in Australia have been fatally attacked this year by sharks, the most in nearly a century. Scientists are unsure why. One of the theories is that climate change is moving sharks into cooler territories.

Germany crash: A 54-year-old man was in custody after crashing his station wagon into a gate outside Chancellor Angela Merkel’s office on Wednesday morning. The police say the motive was unclear, and the chancellor was never in danger.

Duchess of Sussex: In our Opinion section, Meghan Markle wrote about having a miscarriage in July and suggests a question to ask loved ones in this year of loss: “Are you OK?”

Snapshot: Above, people wading through a flooded street in Chennai, India, on Wednesday. Cyclone Nivar gathered speed off India’s eastern shores in the Bay of Bengal, leading officials to evacuate parts of the region. The fourth named storm in the North Indian Ocean this year was expected to bring heavy rains, squalls and flooding.

What we’re reading: This Esquire interview with BTS ponders masculinity, the future and world domination. “For those of us who missed the rise of the world’s biggest band, it also provides ample background,” says Will Dudding, an assistant on the Standards team.

We’re thankful for the time you spend with us every morning. For ideas on other wonderful ways to pass the time, scroll through our At Home collection on what to read, cook, watch and do while staying safe at home.

The time we spend on screens has skyrocketed during the pandemic. Experts say too much screen time can take a toll on our mental health, depriving us of sleep and more productive tasks. Here are some tips for breaking away from our devices.

Come up with a plan. Not all screen time is bad, so assess which parts are toxic and impose time limits to minimize them. Set modest goals, such as a 20-minute limit for reading the news on weekends. For structure, create calendar events for everything, including browsing the web and taking breaks.

Create no-phone zones. Leaving your phone outside your bedroom keeps at bay blue light, which can trick your brain into thinking it’s daytime, and removes the urge to check it in the middle of the night. Another no-phone zone could be the dinner table, a prime opportunity for families to put devices away for at least 30 minutes and reconnect.

Resist the hooks. Beware the artificial goals and infinite feeds that tech companies use to keep us glued to our screens. Turn off notifications for all apps except those that are essential for work and keeping in touch with people you care about. If you feel strongly addicted, take an extreme measure and turn the phone to grayscale mode.

That’s it for this briefing. We’ll be celebrating the U.S. Thanksgiving holiday tomorrow, so there won’t be a briefing, but we’ll see you on Monday morning.

Thank you
Carole Landry helped write this briefing. Theodore Kim and Jahaan Singh provided the break from the news. You can reach the team at [email protected]

P.S.
• We’re listening to “The Daily.” Our latest episode follows New York City residents facing food shortages during the pandemic.
• Here’s our Mini Crossword, and a clue: Expensive bead (five letters). You can find all our puzzles here.
• Kim Fararo, an editor on our Foreign desk, will take on a new role as deputy editor in Europe.

Overnights: New Vision TV leaps ahead of Utsav Plus on Thursday in UK

No (April) fooling: Here’s the 5 best Amazon deals you can get this Thursday...

Throwback Thursday: When Ranbir Kapoor lost his cool on Anushka Sharma for slapping him...

All details of multiple entries in electoral rolls to be made public on Thursday,...