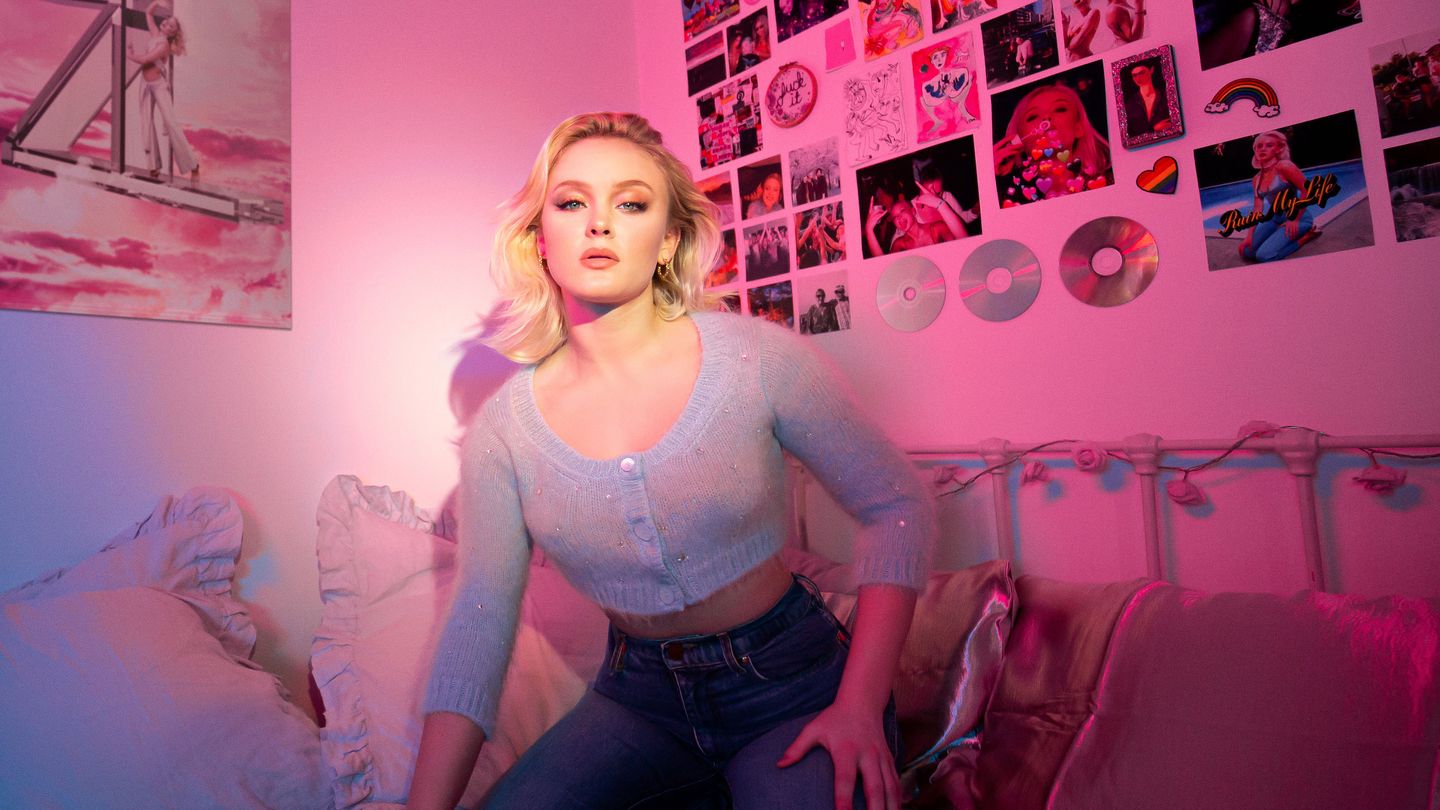 “Love is this universal thing that people want to listen to and talk about and just surround themselves with, which is completely understandable,” Larsson, 23, tells MTV News. “It’s something most people can relate to emotionally. That’s what music does; it’s why we put on sad songs when we’re sad. You might think it doesn’t make sense, because it makes us even sadder, but by listening to a sad song, at least for me, I feel understood, like someone else out there is really sad, too.”

The album opens with what might be a lyrical manifesto, leaning into Larsson’s love obsession with reckless abandon: “Never thought I would love again / Here I am lost in Love Me Land.”  “I don’t think I’m never not in love,” she says, admitting that she always has a crush on someone and also quite enjoys being the object of someone else’s affection.

Earning adoration has never been much of a challenge for the multi-talented performer. At age 14, Larsson was signed to her first record label in Sweden, just four years after enchanting the public with her powerful, crystalline voice on Talang, a Swedish TV talent show. (She was only 10 when she won the 2008 season.) Not long after, she signed a contract with Epic Records in the United States. In 2017, she released what she considers her debut album, So Good, which included her hit tropical house-influenced single “Lush Life” and the sweeping Clean Bandit collaboration “Symphony.”

The Zara Larsson who debuted internationally nearly half a decade ago, when she was “still super young” and a little unsure of herself, is very different from the confident pop star she is today. “Because I had a huge label backing me, they had the money for stylists, choreographers, directors, songwriters. And it’s not that they were trying to change me, but for a really long time I felt like I was working for those people. I’m a people pleaser, so I just wanted everyone to be happy. … I had to remind myself that if I want to be authentic, I need to voice my opinions. And I have lots of opinions.”

Another thing that’s changed for Larsson is how she sees herself as an artist. She reveals that when she first started out, she wasn’t “really a songwriting girl, sitting on [her] bed writing poems or lyrics on [her] guitar.” Instead, she focused on mastering her persona and presence as an entertainer: “I would stand in front of my mirror and sing into a fake mic and tell my fake crowd, ‘I can’t hear you! Sing it louder!’”

The older she gets, however, the more Larsson wants to be involved with every facet of her music, hence her songwriting credits on early Poster Girl tracks like “Love Me Land” and “Look What You’ve Done.” She re-recorded nearly every song on the record “two, three, even four or five times” just to get the sound right. “I wanted it to be as good as possible, I’m never really satisfied,” she says. While some lyrics came easily, challenging discourse was sparked during the writing session for “What Happens Here.”

The song about female sexual liberation marks one of the more politically charged moments on the album, as it tackles the sexist societal double standards girls and boys face when it comes to being sexually active, as well as the loaded language embedded in concepts like “giving yourself away.” “I feel like girls think that they’re giving something up when they have sex,” Larsson says. “It’s like, ‘I’m giving you my pussy,’ or ‘I’m letting you have [this part of me],’ and to me, that doesn’t make sense because sex is something that you both participate in. It’s not something that someone can [consensually] take from you.”

The song was inspired by an experience Larsson had with her first-ever boyfriend, back when she was in school. He told her he wouldn’t tell anyone if they had sex, prompting confusion.  “I get that he was trying to be nice, but the core of that is a problem, because whatever I do, I do because I want to do it. If I’m a ‘ho,’ then you’re a ‘ho,’ because we just did the same thing. But as I got older, I realized that the world doesn’t look at it like that. I don’t agree with that.”

Larsson’s feminist perspective (the singer is passionate and outspoken about women’s rights, as well as LGBTQIA+ issues and racial injustice) is splashed across the artwork for Poster Girl. The cover sees Larsson lounging dreamily in a neon-pink bedroom, a glamorous poster of herself pinned up on the wall over her shoulder. It’s a poignant statement of both self-actualization and self-love — a young woman embracing her own power, success, and destiny, in spite of our culture’s insistence that women’s self-admiration is vain or vapid.

Poster Girl was technically finished at the beginning of 2020, but the pandemic caused Larsson and her team to hold off releasing the record, optimistically thinking things would be “back to normal” by last summer. Larsson adjusted to operating remotely and with a much smaller crew in tow, shooting a more “minimalistic” treatment of the “Love Me Land” music video with Vivi Huuska, a director who worked virtually from Finland. (“She looked like Plankton’s wife, Karen, from SpongeBob — just a little face on an iPad,” Larsson shares.)

Like many people, Larsson grappled with the stillness and isolation of quarantine, a struggle amplified by her typically active, travel-heavy schedule as an artist. “I just sat on my couch for all of 2020. It was really cozy the first week but after a while I was like, ‘What’s my purpose?’ I was a little lost in the sauce.” That aimlessness made Larsson realize just how inseparable she’d become with her identity as a musician: “I think a lot of people who work in entertainment went through that. You associate yourself with your work. I thought I was going to be creative and write songs and start producing in quarantine, but I didn’t do that. And then I felt guilty about not doing it.” Larsson’s sister, Hanna, was eventually able to drag the singer out of bed. “She’d be like, ‘Go on a walk!’ I didn’t have anything to do and I really needed a routine.”

Larsson studied at the Royal Swedish Ballet School in Stockholm when she was younger, an experience she credits with helping her develop a sense of discipline. “When you start off doing ballet by the bar, you do the exact same exercises over and over and over again. The only thing that really changes is you add some extra steps. When you’re just starting off, you can’t do ‘Swan Lake’ right away. I learned that you gotta be disciplined and you gotta do the repetitions to be good at something.”

Her command of dance school-learned “body control” is on full display in the music video for latest single “All About Love.” In the clip, Larsson and her real-life boyfriend, Swedish-American dancer Lamin Holmén, perform a mesmerizing dance as Larsson sings about not wanting to ruin the moment by talking about their feelings. The couple’s chemistry is kinetic, bursting offscreen through intricate choreography as the pair entwine and move around each other, ebbing and flowing between moments of tender intimacy and explosive, fiery passion — a visual metaphor, no doubt, for the butterflies-in-your-stomach stage of falling in love.

“I love to dance at my shows, but now we don’t have shows,” she says. “So I was like, ‘You know what? I’ll put [dance] in my ‘Love Me Land’ and ‘Talk About Love’ videos, so people can still see that.” Above all else, Larsson considers herself a performer and, with a handful of European shows already scheduled for the summer months ahead, she’s looking forward to getting onstage and in front of her fans once again. In the meantime, there’s Poster Girl. “Even if only two people bought [my new] album, I’d be like, ‘Good for you,’ because it’s a great fucking album. I can’t believe I’ve been in the industry this long and I’m just coming out with my second album, but I’m really proud of it.”

RELATED:  The Girl On The Train trailer out; this might just be Parineeti Chopra's best performance yet! - Bollywood Dhamaka