Zepp Z Review: Stylish, but Missing Too Many Features 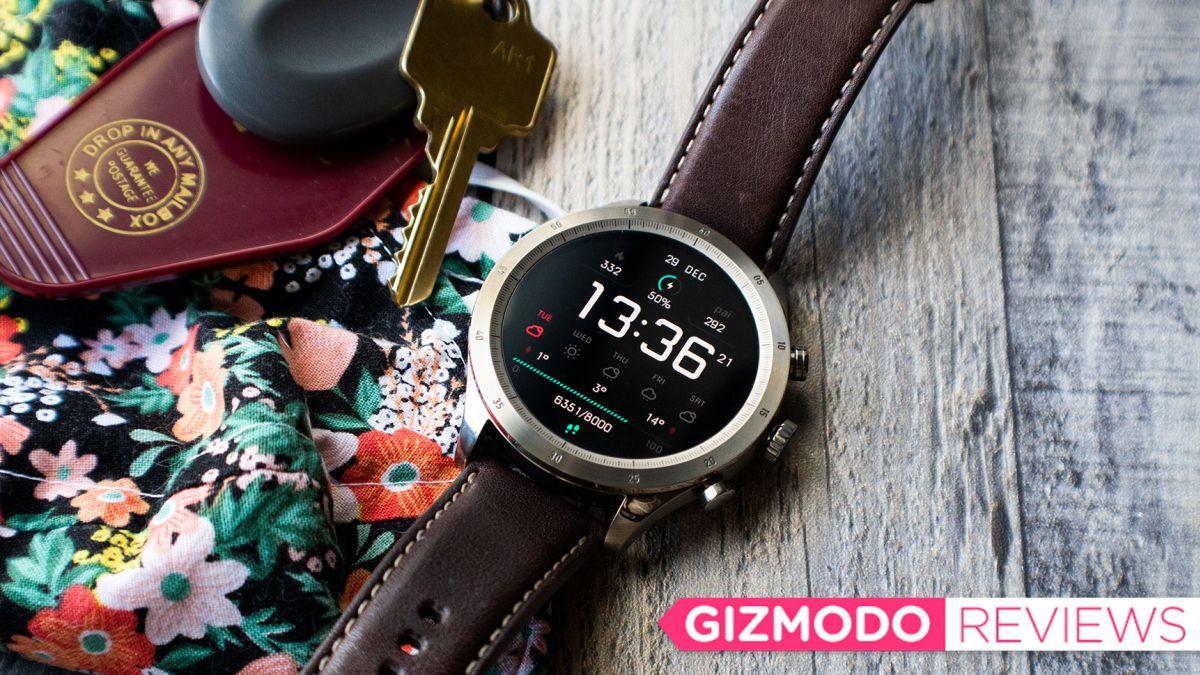 Smartwatches have only gotten more affordable in recent years, and budget options under $200 can be surprisingly full-featured, especially if you don’t mind sacrificing sophisticated health features. So when a $350 smartwatch like the Zepp Z debuts, it has to deliver on multiple levels to make it worth the extra splurge.

Unfortunately, it just misses the mark.

To be fair, there’s a lot I like about the Zepp Z. It’s admittedly handsome, though perhaps better suited to a more masculine aesthetic than I personally prefer. The materials are elegant, with a titanium case and leather 22mm strap. Its 1.39-inch AMOLED display is crisp. Colors are vibrant, and notifications are easy to read. It has all the sensors you’d expect at this price range, including continuous heart rate-monitoring and built-in GPS, as well as some flashier ones like SpO2 sensors. You can enable abnormal heart rate notifications, measure blood oxygen saturation, and see stress levels based on your heart rate variation. Plus, like the Amazfit GTR 2, it features two digital assistants: Amazon Alexa and a proprietary offline assistant. Rounding things out, you get Bluetooth connectivity, 5 ATM of water resistance, a built-in microphone, and a truly impressive 15 days of battery life.

Health-tracking is a mess. Missing many features you expect for this price. No third-party apps. The companion app is meh.

So, what’s the problem? This sounds great! Why are you complaining?

I’m kvetching because while some of these features are legitimately excellent, others are half-baked compared to the competition and this watch’s elegant aesthetics aren’t enough to make up for it.

Let’s start with the design, actually. I can’t deny that this is one of the better-looking smartwatches I’ve tested this year. In fact, this is sort of what I was hoping the Amazfit GTR 2 would look like. But its case is large at 46mm, and this is also a hefty boy, weighing in at 40 grams. (Thankfully, the watch is on the slimmer side, measuring 10.75mm thick.) This might not be a problem if you have larger wrists, but mine are teeny tiny. Not only did this look huge on me, but the Zepp Z also wasn’t super comfortable when I was sleeping or working out. One small nitpick: Although this watch has three buttons on the right side, only the bottom two are functional. The top one is just there for looks—a somewhat baffling choice. This is clearly a smartwatch that has a greater appeal for men, but it’s 2020. Women and other petite-wristed individuals are out here wearing smartwatches and we’d like options. Plenty of other companies make smartwatches in multiple sizes, just saying.

If this was my only beef with the Zepp Z, I’d call it a day. Unfortunately, I got some other bones to pick. Again, for $350, the Zepp Z is missing quite a few features that you’d expect for a smartwatch at this price. There are no NFC payments. There’s also no wifi for faster updates; you’re strictly limited to Bluetooth here. There’s also no third-party app ecosystem, meaning your music controls are limited and your health-racking options are the Zepp app and whatever integrations it supports. There’s also no on-board storage, so unless you like working out in complete silence, it’s not truly a smartwatch capable of supporting phone-free outdoor activity. There’s also no way to respond to notifications directly from your wrist—you can only view them. If you wanted to engage in social health-tracking features, there isn’t really a built-in community like you get with Fitbit, Samsung, Garmin, or Apple (though you can get Strava and Google Fit integration). And, the kicker: The Zepp app still isn’t that intuitive to use and is very much a work in progress.

The biggest problem, however, is that health-tracking is an incredibly mixed bag. Now, if this watch was just designed for looks, I wouldn’t grade it so harshly. But Zepp touts health and fitness features as major draws for this watch, even adding built-in GPS, which should be a plus here. But, hoo boy, even with GPS and the latest firmware, the Zepp Z was inconsistent. I did four test runs with the Zepp Z, my phone, and the Apple Watch SE for comparison. In all but one run, the Zepp Z was considerably off compared to my phone and the Apple Watch SE.

You can see here the Apple Watch is reliably somewhere between 0.15-0.2 mile off of my phone. I’ve done hundreds of comparison runs at this point, and this is true 99% of the time for distances between 3-4 miles. It means that whatever the reported distance, I can trust there’s not too much variance day-to-day. If the Zepp Z had consistently been off by roughly the same amount, that would’ve been OK, though not ideal. Instead, it ranged from as low as 0.09 miles to as much as 0.66 miles. If I were seriously training for a race, this would be awful.

Heart rate-tracking was better, with my average heart rates corresponding within 5-10bpm of both the Apple Watch SE and the Polar H10 chest strap during exercise. Steps were also consistent. Sleep-tracking, however, was hit or miss. I slept terribly on Christmas Eve, waking up several times during the night thanks to my geriatric dog. The Oura Ring logged that accurately, noting a collective 1 hour and 13 minutes that my dog kept me up. The Zepp Z said I snoozed peacefully through the night. On another night, the Oura Ring reported I’d spent 1 hour and 43 minutes in REM sleep and 1 hour and 37 minutes in deep sleep. The Zepp Z disagreed, saying I’d only spent 53 minutes in REM and 40 minutes in Deep sleep. Other nights, the sleep-tracking data corresponded within about 10 minutes for most sleep stages. However, the Zepp Z, like many other smartwatches from its sister brand Amazfit, regularly failed to catch when I was woken up in the middle of the night.

As a consolation, the SpO2 readings were at least on par with my husband’s Apple Watch Series 6. But as I’ve mentioned in previous reviews, I didn’t find Zepp’s stress-tracking to be meaningful. Even though I manually took stress readings from the wrist, none of that made its way over to the app. All I was greeted with were blank screens and charts. Meanwhile, the Fitbit Sense is $20 cheaper, features an electrodermal activity sensor to measure stress, and pairs it with a really thoughtful app implementation of stress and mindfulness logging. Also, a passive stress-monitoring score doesn’t mean much. Personally, I much prefer heart rate variation presented in the context of physical recovery—much like how the Oura Ring or Whoop handles that metric.

This is a glaring misstep for a $350 smartwatch. For this much, I’d expect the health-tracking to be much more accurate.

But it’s not all bad. There are quite a few things this smartwatch does well, too.

As with the Amazfit GTR 2, the Zepp Z features an offline voice assistant. While it’s not very forgiving if you mess up the command, once you get them memorized, this is actually pretty nifty! I found it useful to start outdoor run workouts via voice, which meant I didn’t have to take off my gloves in the freezing cold. Also, in the time since I reviewed the GTR 2, Zepp has finally added Alexa compatibility. It’s easy to set up via the Zepp app and works well for answering basic queries and controlling your smart home—provided you’re within Bluetooth range of your phone.

Also, 15 days of battery life is no joke. I only tested the Zepp Z for about a week, but during that time I did about 3 hours of GPS activity and wore it 24/7 to track sleep—and still had 49% battery left. That’s on track to hit Zepp’s estimated battery life and is far better than the Apple Watch Series 6, the Fitbit Sense, and the Samsung Galaxy Watch 3.

There are also a few smaller touches that I appreciate. You can easily swap watch faces and edit complications. There are quite a few widgets as well. The display is quite nice and call/text/app notifications are easy to read. The PAI system featured on Amazfit and Zepp watches is a more helpful metric than steps or calories burned for gauging whether you get enough cardio activity during a 7-day period.

But the things I like about the Zepp Z don’t put it in the same league as other watches in this price range. The Fitbit Sense doesn’t look as sophisticated, sure, but for $20 less it gets you FDA-cleared ECGs, better stress-tracking via a novel electrodermal activity sensor, a body temperature sensor, SpO2 sensors, Amazon Alexa or Google Assistant, about a week of battery life, built-in GPS, NFC payments, and a third-party app store. You get most of what the Zepp Z has and then some, for less money. Meanwhile, for just $50 more, you could get the base models of the Apple Watch Series 6 and Samsung Galaxy Watch 3. Those get you built-in GPS, SpO2 sensors, FDA-cleared ECGs, robust third-party apps, NFC payments, and even features like fall detection and guided workouts with your metrics displayed in real-time (though Apple’s Fitness+ is much more advanced than what Samsung offers). I also happen to think they look pretty nice.

If the Zepp Z was priced like the $250 Zepp E, this would be a different story completely. Alas, it’s $100 more, with so-so health tracking, and it’s missing features that are common for smartwatches over $300. There are also several smartwatches—like the Fossil Gen 5E, the Fossil Gen 5, the Fitbit Versa 3, and even the Amazfit GTR 2—that give you everything the Zepp Z has and then some. With the Zepp Z, you’re really paying a pretty premium for above-average battery and a certain aesthetic. That simply isn’t going to cut it.