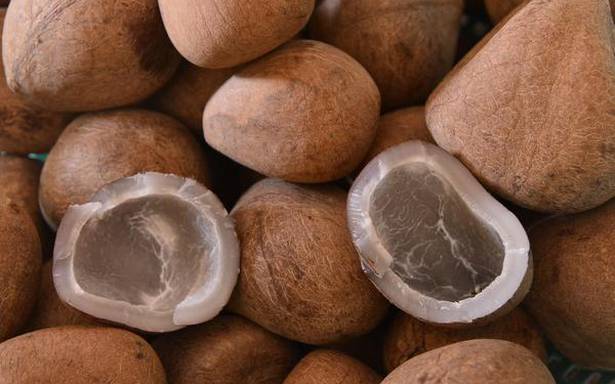 Traders are keeping their fingers crossed as the price — hovering in the range of ₹230-240 per kg in the retail market — has led to about 30 per cent shift in consumer preference to cheaper edible oils. Retail priced of edible oils, such as palm oil and sunflower oil, range between ₹130 -160 per kg. The rising price of coconut oil has slowed down institutional buying, especially in the HoReCa segment. They are also concerned of the rampant adulteration following the price hike.

Kerala’s coconut oil consumption, pegged at around three lakh litres per year, has taken a hit with the increased availability of cheaper edible oils. Official sources said that the move by coconut oil exporters to import copra from Indonesia under the Advance Authorisation Scheme has not yielded results due to a combination of factors, including higher prices, container shortage, and increase in shipment freight rates, among others. The prevailing price of copra in the international market is $1,200 per tonne vis-à-vis $900 last year. There is an acute shortage in the domestic market due to hoarding. The sector is anticipating production drop of raw nuts this year of about 5-10 per cent due to climatic issues, the sources said, adding that all-India production in 2018-19 was 21,288 million nuts.

He wondered how the prices were moving up when the coconut harvest season in Kerala has already commenced. “It seems to be an artificial hike due to holding of stock by some big traders in anticipation of a further rise.”

According to him, the lifting of restrictions on essential commodities by the government has facilitated traders to stock more, which might be a contributing factor for hoarding.

Ubais Ali, Executive Director, Mezhukkattil Mills, a leading player in the coconut oil industry, said that raw coconut prices in international markets were seen going up from April last year because of the logistical challenges, prompting buyers to see India as a destination for procurement to meet their value-addition requirements. “Probably this high price may not last for long, given the declining trend in the commodities market of Rotterdam and Seattle, which will force buyers to shift to other cheaper destinations,” he said. However, the rising trend in the overseas market has given domestic traders confidence to hold on to stocks, in the hope of being able to fetch more returns.

Though the harvest season has started in Kerala, the expected arrivals were lower. But the quantity could go up any time, which may trigger a price fall, he added.