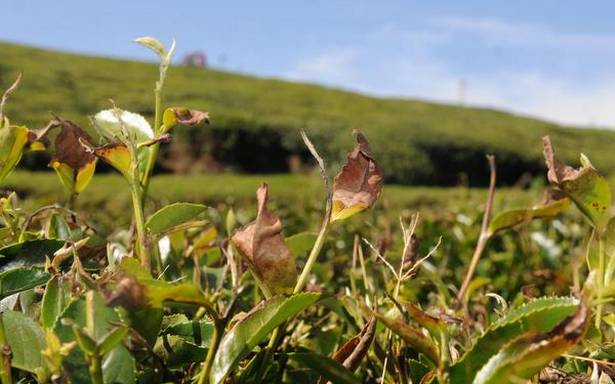 Tea plantations in South India, particularly Munnar (high ranges) and the Nilgiris, have been affected by unusual frost this month. The weather impact is likely to result in January-March production being affected.

“South Indian tea plantations have been hit by unusually extended and severe frost damage even in late February, which is very rare. Usually, sub-zero temperatures hit Munnar and Nilgiris during December and early January. But this year, the extreme cold weather along with frost has wrecked the tea plantations in Munnar and Nilgiris,” a leading tea producing company official said.

“While it may boost tourism, plantations have suffered significant loss due to extensive frost,” said the official. This year, the cold weather has prolonged for three months and has affected the crop severely. Around 900 acres of the company has been affected.

This will have an impact on fourth quarter production with at least 0.5 million kg being lost quantity-wise in addition to revenue loss. The company’s production last year was close to 21 million kg.

Ramesh Bojarajan, President, Nilgiris Small Tea Growers Association, termed the situation as unusual after a gap of 35 years and it has badly affected small tea growers with production likely to drop 50 per cent. Normal tea production in Nilgiris is 20 million kg per week. Adverse weather conditions continue, impacting tea plucking, as there are no leaves in the bushes.

Due to this erratic weather pattern, Bojarajan said the sales percentage at the Coonoor tea auctions was below 60 per cent with average prices dropping ₹3-5.