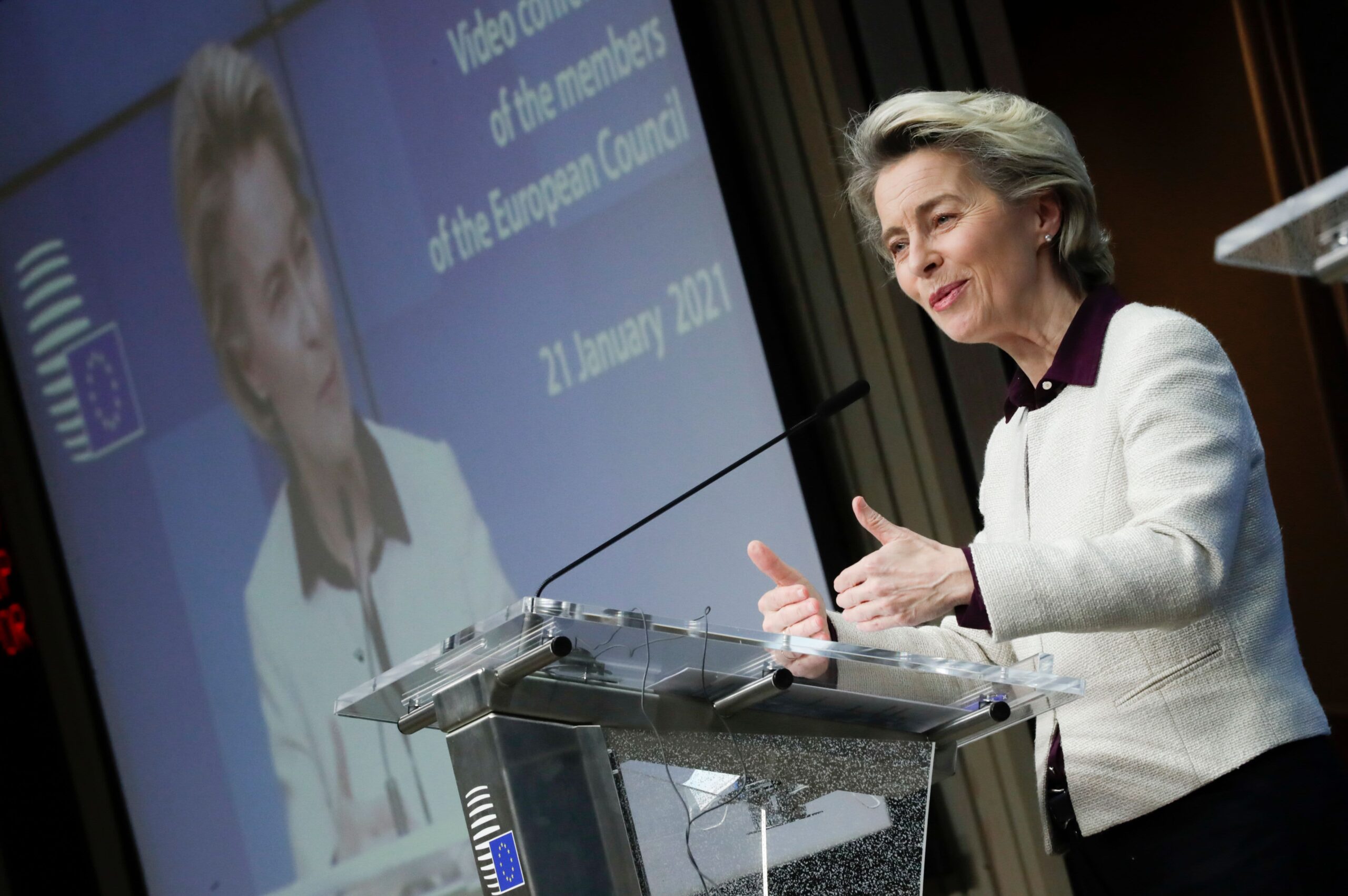 European Commission President Ursula von der Leyen gives a presser at the end of a video conference meeting of the members of the European Council focused on the Covid-19 pandemic, in Brussels, on January 21, 2021.

LONDON — The European Union on Friday published a redacted version of the contract signed with AstraZeneca, as the bloc piles pressure on the drugmaker to deliver the Covid vaccine supplies it promised.

The EU, which has been criticized for its slow rollout of inoculations, was delivered a blow by AstraZeneca last week when the company said it would only be able to deliver a fraction of the shots agreed upon for the first quarter.

AstraZeneca has denied that it has failed to honor its commitments, saying delivery figures to the 27-nation bloc were targets rather than promises. The company also cited production problems at its European plants for the delays.

The European Medicines Agency is expected to make a decision on whether to actually approve the AstraZeneca vaccine for use on Friday.

“AstraZeneca has also explicitly assured us in this contract that no other obligations would prevent the contract from being fulfilled,” she said, according to Reuters.

The head of the EU’s executive arm claimed the agreement contained clear delivery amounts for December and the first three quarters of 2021.

AstraZeneca was not immediately available to comment when contacted by CNBC on Friday.

Earlier in the week, AstraZeneca CEO Pascal Soriot reportedly said the EU contract was based on a so-called “best-effort” clause and did not formally commit the drugmaker to a specific timetable for deliveries.

The EU’s von der Leyen rejected this suggestion on Friday, adding that the clause was only valid if it was unclear whether AstraZeneca could develop a safe and effective vaccine. She also claimed that the contract specifically mentioned four production sites that would supply the vaccine to Europe, two of which are in Britain.

EU officials have indicated that supplies could be diverted from the U.K. to Europe if the delays in European production persist.

The EU, with a population of roughly 450 million people, is struggling to get its vaccination drive into gear as it lacks supplies and currently lags far behind countries like Israel and the U.K. in delivering vaccines to its citizens.

It was first dealt a blow by vaccine maker Pfizer-BioNTech, which announced that it had to temporarily lower production in order to upgrade its manufacturing capacity in Belgium. This was then followed by AstraZeneca last Friday reducing its delivery estimates for the region.

One unnamed senior EU official told Reuters that the bloc expected about 80 million doses by March, but had been told it would receive only 31 million doses instead. The company has not confirmed the quantities involved.

A deepening dispute between the EU and AstraZeneca has raised concerns about international competition for limited vaccine supplies. It is hoped the inoculations could help to bring an end to the coronavirus pandemic.