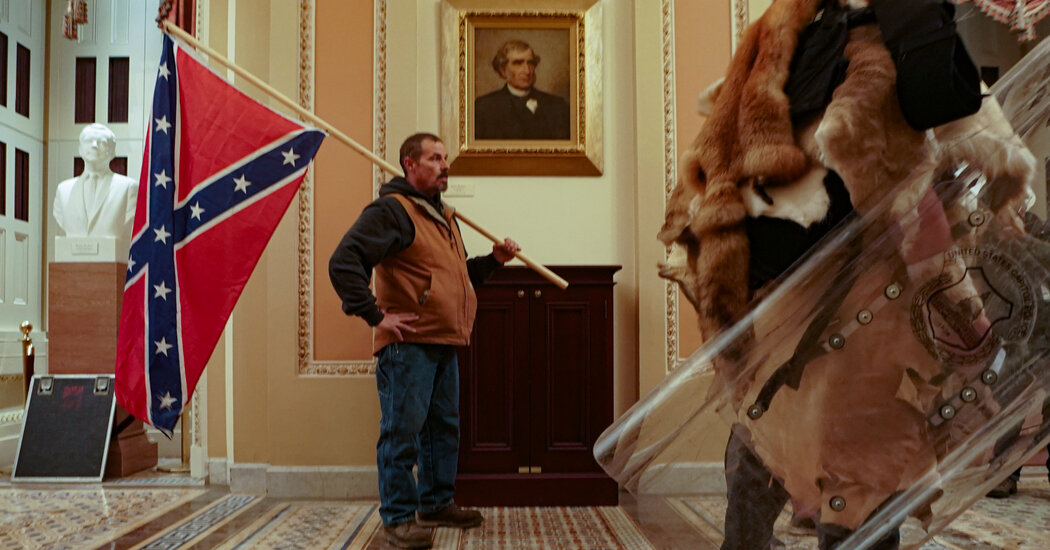 A Muslim American college student said he had fought back tears when he saw the image of a Trump supporter carrying the Confederate battle flag through the halls of the Capitol on Wednesday.

A Black Senate aide who for years has walked confidently through the halls of Congress said his feelings of safety had crumbled when he saw the photo.

And a Black historian said she had immediately thought of James Byrd, the Black Texas man who was dragged to death by white supremacists in a pickup truck in 1998.

The historian, Mary Frances Berry, a professor of history at the University of Pennsylvania, said she had felt “disgust” and recalled “wanting to scream.”

“To see it flaunted right in front of your face, in the United States Capitol, the heart of the government, was simply outrageous,” she said.

Amid the images and videos that emerged from Wednesday’s rampage, the sight of a man casually carrying the Confederate battle flag outside the Senate floor was a piercing reminder of the persistence of white supremacism more than 150 years after the end of the Civil War.

Months after statues of Confederate leaders and racist figures were removed or torn down around the world, an unidentified man in bluejeans and a black sweatshirt carried the emblem of racism through the Ohio Clock corridor, past a portrait of Senator Charles Sumner of Massachusetts, an abolitionist.

The emblem has appeared in the Capitol before.

The Mississippi flag, which once featured the Confederate symbol prominently, hung in the Capitol until June 2020, when it was replaced after a vote by the State Legislature to remove the emblem.

But Wednesday was the first time that someone had managed to bring the flag into the building as an act of insurrection, according to historians.

The man carrying the flag faced less stringent security than that encountered by the Confederate soldiers who failed to penetrate Union forts guarding the Capitol during the Battle of Fort Stevens on July 11 and 12, 1864, said William Blair, professor emeritus of history at Penn State and the former director of the George and Ann Richards Civil War Era Center at the university.

“The Confederate flag made it deeper into Washington on Jan. 6, 2021, than it did during the Civil War,” he said.

The sight, Professor Blair said, was “jarring and disheartening.”

“There is so much confusion about people who fly that flag,” he said. “But even if they try to divorce slavery from it — which you can’t — how do you justify waving the flag of a confederacy that tried to tear the country apart, then call yourself a patriot?”

Representative Colin Allred, a Black Democrat from Texas, said his wife had been texting him while he was on the House floor to see if he was safe and had sent him an image of the man with the flag.

The photo was confirmation, he said, that those who had stormed the Capitol were “tied deeply” to white supremacism.

“That is something that will stay with me,” Mr. Allred said. “They set up a noose and scaffolding on the Capitol Hill. This event has to be a wake-up call.”

Josh Delaney, a deputy legislative director for Senator Elizabeth Warren, said he had been at home, watching the riot unfold on television, when the photo appeared on the screen.

“It was like time stopped,” he said. “My stomach dropped. I don’t know if I stopped breathing, but it was shock. I can only imagine that’s what it must be like to be really in shock.”

Mr. Delaney, who wrote in The Boston Globe about seeing the flag, is Black and grew up in Georgia, where the flag was a painful but commonplace reminder of where he was not welcome.

He said he had never expected to see the flag in the Capitol, where he has worked for more than six years.

“I have always felt like this is the safest place I could ever be if anything ever happens,” Mr. Delaney, 31, said. “To have that illusion shattered, I don’t know that I’ll ever have that same feeling again.”

Raheel Tauyyab, a junior at the University of Virginia, said he had learned about the flag from a professor who was monitoring the news about the riot on his computer during a virtual class Wednesday afternoon.

Mr. Tauyyab, 20, a Muslim American who said his goal was to one day work at the Capitol, said he could not forget the traumatized look on his professor’s face.

“I won’t lie: I did shed a tear,” he said. “It was really stabbing to the heart to see something like that happen.”

The Rev. Robert W. Lee IV, a great-great-great-great-nephew of Gen. Robert E. Lee who has supported broad removal of statues of his ancestor, said he had been struggling with what he was planning to tell congregants on Sunday at his nondenominational church, the Unifour Church in Newton, N.C.

He said he could not get the sight of the flag “desecrating” the Capitol out of his mind.

“It shook me to my core in a way that other images haven’t over the past four years,” he said. Since Wednesday, he said, he has sat at his computer and struggled to come up with the right words.

“It struck me as something that, in this moment, as someone who is supposed to know what to say as a clergy person, I have nothing,” he said. “I’ve got nothing on this.”