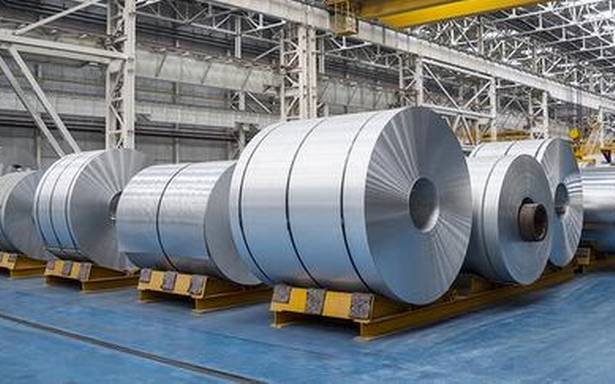 The continuing surge in global steel demand, production curbs in China, and high iron ore prices will together fuel another surge in domestic steel prices, according to analysts.

“We believe domestic hot-rolled coil (HRC) prices are likely to see two hikes in India: up to ₹4,000 per tonne now and another ₹2,000-3,000 per tonne in April,” Motilal Oswal Institutional Equities said on Thursday.

The continuing surge in global demand and tightness in supply due to supply-side issues and production curbs in China has helped regional steel prices in Asia inch up further, Motilal Oswal said, noting that regional prices have risen 5-7 per cent week-on-week.

“Domestic HRC prices at ₹55,500 per tonne are trading at a discount of ₹9,000 per tonne to the landed cost of imports from Korea,” it added.

Steel prices in the world are at an all-time unprecedented high due to steep increase in the prices of iron ore and due to the strong growth in steel demand from China, India, the US, Europe and other emerging markets, as global markets recover from a year-long slowdown with the reopening of business activities and vaccination drive, CARE said.

Domestic steel prices remained relatively low in 2019 as well as until October 2020, when they began a sharp upward climb. Prices corrected slightly in February, before continuing their rally in March and now April.

At ₹55,500 per tonne, domestic steel prices have risen a steep 47 per cent since April last year, CARE noted, adding that the new rally will significantly hit the infrastructure and automobile industries. “The construction and real estate sector accounts for almost 55-60 per cent of total steel consumption followed by the auto sector, which accounts for 9 per cent,” it said.

“Most of the top auto manufacturers are expected to take a second price hike in the range of 1-3 per cent in April, after already having taken 3-4 per cent hike this year, to offset the impact of higher steel cost,” it added.

Even as steel consumers brace for another hit, stocks of domestic steel producers such as Steel Authority of India and JSW Steel have been rising sharply over the past few days.