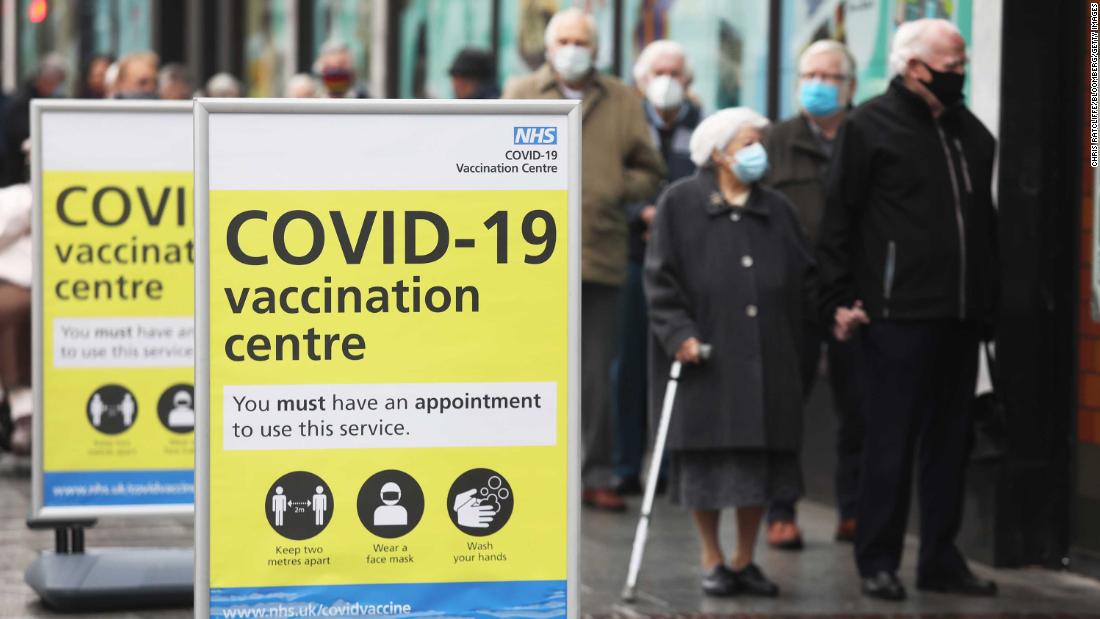 The ugly vaccine nationalism that the World Health Organization and other public health advocates feared is here. And it’s beginning in Europe, the region that usually boasts the world’s greatest levels of equality by many measures.

The spat revolves around the EU’s deal with AstraZeneca, which recently informed the bloc it would not be able to supply the number of vaccines the EU had hoped for by the end of March. EU leaders are furious that the company appears to be fulfilling its deliveries for the UK market and not theirs.

And while the EU’s complaints are largely directed at AstraZeneca, the dispute has triggered animosity on both sides of the Channel, the two sides having only just emerged from four years of bickering over the terms of their Brexit divorce.

On Friday, Brussels imposed controls on vaccine exports to keep track of how many doses were leaving the continent and where they were going, in what leaders called a transparency measure but what looks like a targeted export ban.

“The measure is not targeting any specific country,” European Commission Executive Vice-President Valdis Dombrovskis said during a press briefing in Brussels. But as he announced the measure, he also released a list of dozens of countries exempt from the controls, including many low-income nations. Unsurprisingly, the United Kingdom was not on it.

“The UK has legally-binding agreements with vaccine suppliers and it would not expect the EU, as a friend and ally, to do anything to disrupt the fulfillment of these contracts,” a 10 Downing Street spokesperson said.

The EU also said it would invoke a clause in the Brexit deal to impose controls on exports to Northern Ireland to ensure doses wouldn’t funnel through the region into the rest of the UK. It then backed down from the threat in the late hours of Friday night after UK and Irish leaders sought urgent clarification from Brussels over the highly controversial move.

Who should get UK-made doses?

EU leaders say AstraZeneca is prioritizing the UK in its deliveries. In response, it conducted a spot inspection of an AstraZeneca plant in Belgium on Thursday to ensure it was telling the truth about low supplies there. Some Brexit hardliners have lashed back at the moves, branding the EU as slow and incompetent.

Peter Bone, a Conservative British lawmaker, said EU leaders were “bullies” for inspecting the Belgian plant. In an interview with talkRADIO on Friday, he accused them of “trying to cover up for their own failures” and reversed the EU’s accusation, saying Brussels was trying to divert UK-made vaccines to its own people.

But the EU’s contract with AstraZeneca — which Brussels published on Friday — states that doses for the bloc could indeed come from a supply chain that includes UK-based plants. Equally, the UK is receiving doses from Europe as well — a person familiar with the matter said that the UK is still receiving small numbers of vaccines made in European plants, and that its initial doses had come from Europe too.

The UK government, which is miles ahead of the EU in vaccinating its population, has not released its contract with the company and has repeatedly declined to disclose to CNN how many doses it has in hand, citing “security reasons.”

The UK’s Department of Business, Energy and Industrial Strategy (BEIS) told CNN that a “majority” of doses in the country came from within the UK, admitting some came from elsewhere.

Redactions of the published contract make it impossible to know just how badly the bloc has been hit, but AstraZeneca confirmed Friday it was aiming to ship at least 31 million doses to the EU by the end of March. Reuters had earlier reported the company had slashed the first quarter amount from 80 million doses to 31 million.

What the EU wants to know is why it isn’t receiving doses from the UK. BEIS did not answer CNN’s question on whether the UK had asked to be prioritized in its contract with AstraZeneca, saying only that it had ordered 100 million doses and had agreed timescales for delivery.

AstraZeneca CEO Pascal Soriot, however, said openly that the company was supplying the UK first.
“The contract with the UK was signed first and the UK, of course, said ‘you supply us first,’ and this is fair enough,” he told Italy’s la Republicca on Wednesday. The EU contract, on the other hand, did not legally bind the company to a particular schedule, he said.

“We reject the logic of first come, first served,” she said at a press briefing on Wednesday. “That may work at the neighborhood butcher’s but not in contracts and not in our advanced purchase agreements.”

Much of the problem appears to come down the use of the term “Best Reasonable Efforts.” In its agreement with the EU, AstraZeneca agreed to making its best efforts in building capacity to produce the doses the EU had ordered. Any legal challenge would involve a decision on whether the company had indeed tried its reasonable best to produce and deliver.

At an AstraZeneca briefing on Friday, Soriot did not reveal any new details of its arrangement with the EU, saying only that the issue was “very unfortunate” and that the company was “working 24/7” to source new materials and improve supply.

It is understandable that the EU and UK would want to secure as many doses as possible in this early stage of their vaccination programs. The pandemic has hit both the UK and the bloc profoundly.

Of the world’s worst-affected countries, the UK now has one of the highest confirmed Covid deaths proportionate to its population. EU nations too have struggled with devastating waves that have ripped through its elderly and vulnerable citizens.

But as the UK continues to give hundreds of thousands of Covid-19 shots by the day, Spain had to partly suspend its vaccination program this week, so low are its vaccine supplies. Germany has delayed its program and France says its program too is under threat.

There is a lot riding politically on a successful vaccine program. UK Prime Minister Boris Johnson’s government has been lambasted by much of the media and public for a shambolic Covid-19 response. But the country’s leadership in developing, approving and now distributing vaccines is being widely celebrated. It’s a political win Johnson sorely needs.

The European Union too is determined to appear strong and functional after the UK officially left the bloc on December 31. Brussels will not want to make its decision to centralize vaccine procurement and distribution, in the name of equality and fairness, appear like a failure.

What appears not to be happening is any kind of civilized discourse between the UK and EU over what to do about the vaccine shortfall. Contracts aside, the unprecedented challenge of scaling up vaccine doses in the tens of millions could be an opportunity to coordinate to ensure the most vulnerable are vaccinated first.

It was only in September at the UN General Assembly that Johnson said “it would be futile to treat the quest for a vaccine as a contest for narrow national advantage.”

“The health of every country depends on the whole world having access to a safe and effective vaccine, wherever a breakthrough might occur; and, the UK, we will do everything in our power to bring this about.”

Terje Andreas Eikemo, director of the Centre for Global Health Inequalities Research at the Norwegian University of Science and Technology, said that vaccines should be shared among the world’s most vulnerable people first, regardless of where they live.

“It’s natural for governments to want to put their own populations first, and this is something that happens when there is a good that is limited. When you have that in a society, it will very often result in what we’re seeing with the EU and UK,” he told CNN.

“Everyone’s trying to gain what’s best for their populations, but we need to stay inclusive. This is a global problem, this is not a national problem.”

There is a huge sense of nervousness in much of the developing world: people there are watching some of the richest nations scramble for doses after buying up huge numbers of vaccines in advanced purchase agreements before they were even proven effective.

Dr. Nashwa Ahmad from the South City Hospital in Karachi, Pakistan, told CNN that she and her colleagues have been waiting for weeks to hear of news of access to vaccines.

“That means our healthcare workers still have to continue to do their jobs for endless hours without the protection of the vaccines. It’s very difficult,” she said.

Meanwhile, rich nations are continuing to expand their already large advance purchase agreements. The UK has secured more than 360 million doses in advance and plans to buy more than 150 million between from Johnson & Johnson and Valneva. That would be enough to cover nearly four times its entire population.

At the World Economic Forum hosted remotely from Davos, Switzerland last week, South African President Cyril Ramaphosa slammed rich nations for hoarding, and urged them to share them with the world’s most vulnerable.

“Some countries have even gone beyond and acquired up to four times what their population needs, and that was aimed at hoarding these vaccines. And now this is being done to the exclusion of other countries in the world that most need this,” he said.

In anticipation of this problem, the COVAX initiative was established in June last year with the aim of making 2 billion vaccine doses available to be distributed to parts of the world where there were gaps, largely in the global south. Even that will only cover around 20% of people in each eligible country. Indeed, the same rich nations accused of hoarding are donating to the scheme, with the UK being the largest single-country donor.

The tussles for supplies have renewed calls for all countries to work within a centralized system to avoid this uneven distribution of Covid-19 shots.

“While many have commendably contributed large sums of money to COVAX, they undermine its effectiveness, and the overall effort to end the pandemic as rapidly as possible for everyone, when they simultaneously engage in vaccine hoarding,” Obiora Okafor, the UN’s independent expert on human rights and international solidarity, said in a statement recently.

But there appears to be little hope of that actually happening. Even the WHO — whose chief in September said initial vaccines should reach “some people in all countries, rather than all people in some countries” — appears to have lost hope of a truly collaborative response.

When asked by CNN at a press briefing whether the UK should be allowed to oblige AstraZeneca to provide it with vaccine doses first, WHO Regional Director for Europe Hans Kluge said that “solidarity does not necessarily mean that each country in the world starts at exactly at the same moment.”